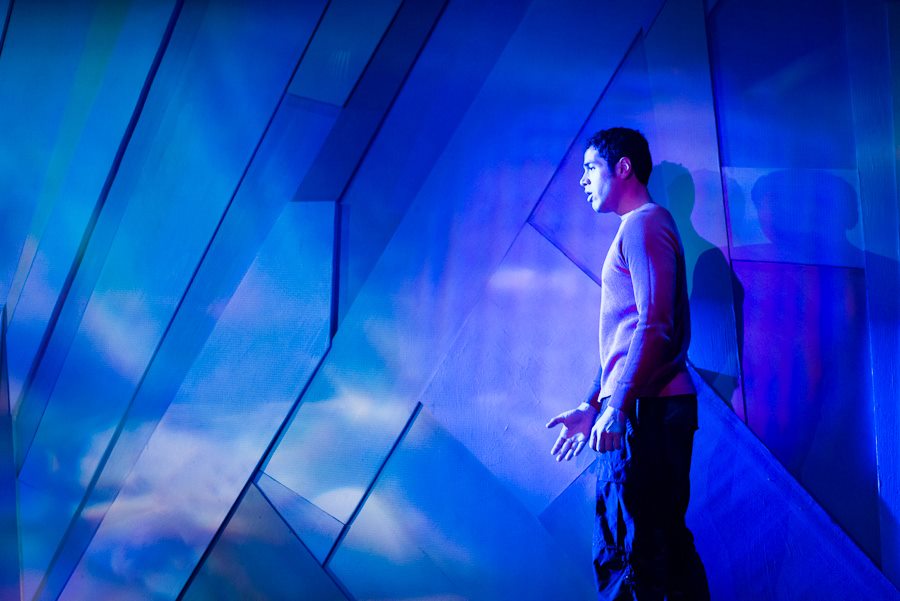 Next To Normal is fantastic.  Next To Normal is a bitch.  When I saw Next To Normal  last year, I fell immediately in love with the thing.  When I heard Mixed Blood would be producing the local premiere of the Tony and Pulitzer Prize-winning rock musical, I was very excited.  Mixed Blood is a perfect fit for this kind of material.  And while the multiracial casting of something I’d previously only seen in its lily white original version seemed like it might be a daring departure, I’m even happier to report that it’s a complete non-issue.  The actors appeared onstage, my brain said, “These are your actors.  Cool.  On with the story.”  One of these days, I’ll evolve enough as an audience member that I won’t even take that much notice.  Productions at Mixed Blood will be a large part of getting me there.

“We have the happiest septic tank on the block.”

The other exciting thing about Mixed Blood doing Next To Normal is everyone can see it.  It’s free.  Their Radical Hospitality initiative is in its second year which means the cost of admission is your contact information (which you give to theaters all the time anyway, even when you pay).  Show up a half hour before the show.  They give you a ticket, part of which you fill out with your contact info.  That’s the part of the ticket you give to the ticket taker.  Then go on in and pick your seat.  It’s general admission.  If you want to guarantee yourself a seat (if something’s selling like gangbusters or you don’t like even a tiny bit of uncertainty), you can pay $20 for the privilege of that kind of peace of mind.  What do they do with your contact info?  Let you know about other free shows you can attend, as well as special events and other programs.  Sometimes with cheap theater you get what you pay for.  In this instance, you’re getting a great show, and they get to know you a little better.  Win, win.  It’s art theft they actually encourage.

Since this is music everyone should hear, and a story well worth sharing, the fact that there are no barriers to seeing it is a real gift.  Mixed Blood is giving away Next To Normal.  You should take them up on it.

It’s the story, and the way that story is told, which made Next To Normal such a bewitching play for me, and one of the best things I saw last year.  Mixed Blood’s Next To Normal may rank up there for 2012 for a lot of the same reasons.  Next To Normal‘s music is powerful and beautiful, heartbreaking and romantic, scary and mesmerizing.  Layer in the lyrics and script on top of that, and you can add hilarious and whip smart to the mix of adjectives.  Next To Normal is about a family who loves each other so much, they can’t stop trying to save each other and make things work, even when they probably should.  The family in Next To Normal feels everything so deeply that the highs are almost as dangerous as the lows.  A lot of the time, moments they have together contain both extremes at once.

“I don’t put anything in my mouth that’s on fire.”

The mother, Diana (Aditi Kapil), is grieving the loss of a family member.  The identity of that family member is the first of many surprises and hairpin turns in the plot that I had to force myself not to accidentally spill to the person with me who was seeing the show for the first time.  The shocks here are half the fun (no pun intended – that bad joke will also make sense when you see it).  Diana’s husband Dan (Thomas W. Jones II), daughter Natalie (Brittany Bradford), and son Gabe (Ricardo Vazquez) have all learned how to work with Diana to help her get through the day, but Diana needs more help than any of them can give.  So there are doctors (David Simmons, Regina Marie Williams) and medications in the routine as well.  Diana isn’t just grieving, she’s bi-polar.  And hallucinating.  Natalie is beginning to worry that she might end up just like her mother.  When Natalie takes up with stoner classmate Henry (Tom Reed), she starts self-medicating in ways that don’t often end well.

“There are depression chat rooms?”

All of the above doesn’t exactly scream “musical comedy” does it?  But the laughs are plentiful (if mostly squarely in the category of gallows humor), and the music is gorgeous.  The band (Simmons doing double duty on guitar, Luke Darville on cello, Jason Hanson on piano, Dan Horvath on drums, Benjamin J. Kelly on bass, and Eric Mayson violin and second keyboard) keeps powering the story forward with undeniable energy.

The challenge of a fast-moving plot with multiple locations is solved by Joseph Stanley’s multilevel set and multi-purpose units of wood and steel which act as a bed one minute, a table the next, a bathroom medicine cabinet in yet another scene, and so on.  Boxes that act as chairs also open up to reveal shelves of books, a toilet seat, a table lamp and more.

An addition to this production’s telling of the story is the media design of Alex Oliszewski, projections on the back wall of the set of moving images both literal and symbolic, as well as a live camera feed from a special part of the set where one of the characters casts a larger than life shadow over the existence of the others.  I feared this might be either cheesy or needlessly distracting but again and again it helped reinforce the story, mood and character instead.  Also it wasn’t so overwhelming that you couldn’t ignore it if you chose to.  The images were there when you needed them, and unobtrusive when you didn’t.  Also projected on either side of the stage were the words of the script and lyrics.  This is not only handy for audiences needing this particular accessibility assist, but also for those of us who might wonder, “Wait, what did he just say? What was that lyric she sang?”  If you’re quick, you can grab it on the fly in your peripheral vision.  How lighting designer Karin Olson gets the play of light and all these projections to work in tandem, I don’t know, but it’s a tricky feat, smoothly accomplished.

“This is one of those times when you could just be a typical parent and lie.”

Here’s where Next To Normal is a bitch.  I actually envy the folks who are going to see this show starting in the second week of the run, after me.  The danger of a rock musical, at this time of year, is two-fold.  One, your actors can get sick just like anybody else.  This seems to have been the case with Regina Marie Williams in the pivotal role of Diana’s primary doctor.  I’ve heard Williams sing before and her voice is truly a marvel.  The night I saw it, she was pushing both to speak and to sing, and her normally golden throat was not operating at its peak.  A few days rest and she’s going to knock people out of their seats.  There are few that can match her.

The other danger of a rock musical – by the time you’ve blown through a full week of tech rehearsals, runs and opening performances, some of your actors’ voices are just going to be shot.  This seemed particularly true of the parents Diana and Dan the night I saw it.  Aditi Kapil came off the better of the pair, but because she’s the central figure of the story and has to do much of the heavy lifting in the play, the strain was showing around the edges.  Thomas W. Jones II as Dan was mic’d and less than ten feet away from me most of the time, and I had a hard time following him (and I’m somebody who came in knowing the songs ahead of time).  Having seen Jones with Williams previously in Mixed Blood’s production of Yellowman, I know firsthand how powerful a presence he can be onstage.  In the acting of the story, that shone through.  For the music, his voice was fighting against him.

That may have been another strategy director Jack Reuler applied here.  You could cast performers who could sing the hell out of this show, but if they weren’t good actors, the depth and power of the emotion would be lost.  It would be just a concert with a story thrown in as an afterthought.  But Brian Yorkey’s book is as key as his lyrics for Tom Kitt’s music to making Next To Normal the amazing theatrical experience it can be.  You need strong actors for the music to really mean anything.  In choosing Kapil, Jones and Williams, all veterans of previous Mixed Blood presentations, Reuler is banking on the humanity of the characters and their struggles hitting the audience with high intensity, making the songs pack that much more of an emotional punch.  It’s a smart way to go with Next To Normal.  With rested vocal chords, this production will really take off.

“You’re the MacGyver of pot.”

The younger generation of characters fared better the night I saw it.  Brittany Bradford as Natalie, Ricardo Vazquez as Gabe, and Tom Reed as Henry all have powerhouse vocals.  Bradford’s character could be unsympathetic, but in Bradford’s hands even when Natalie is making selfish, even dangerous, choices, we never lose sight of just how much this girl is dealing with trying to grow up with two very distracted parents who have little time or energy to help her.  Reed is a long way from his turn in the ensemble of Mixed Blood’s Avenue Q last year, or the pop-culture musical parody hits he stages in the Minnesota Fringe Festival.  Reed’s Henry is shockingly normal and straightforward for a character on this actor’s resume – an endlessly patient, persistently romantic, ideal of a  stoner boyfriend.  Vazquez as Gabe has a voice so good it doesn’t seem human.  It’s easy to see why he’s the golden boy of the family, and almost impossible for Natalie to compete with in her parents’ hearts.  All three young actors have challenging musical and acting duties to perform and they perform them in a way that makes it seem effortless.

Next To Normal is a highly unusual musical, but that’s what makes it so entertaining.  In addition to dealing with drug use, grieving and mental illness, it also deals with suicide attempts, shock therapy, and the characters’ rather transparent sex lives, with language to match.  But again – comedy matching the drama joke for gut punch, and truly sublime music.  In some ways it can be as challenging for the audience as for the actors and musicians, but man, it rewards you many times over for your effort.  I can think of all kinds of reasons you should go, and not a single reason you shouldn’t.

See Next To Normal at Mixed Blood.  Just see it.  You can thank me later.  But thank Mixed Blood first.

Also read Bev Wolfe’s review of Next to Normal at Mixed  Blood Theatre Company and Matthew Everett’s review of the touring Broadway production.