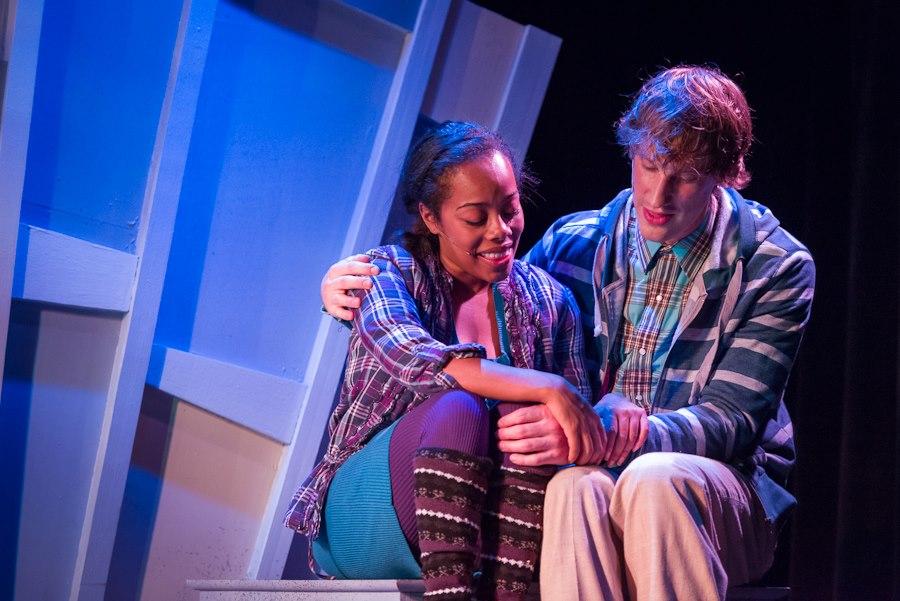 Mixed Blood Theatre Company recently opened its season with an ambitious production of the musical Next to Normal. Normal won the 2009 Tony Awards for Best Original Score, Best Orchestration, and Best Performance by a Leading Actress in a Musical (Alice Ripley). The Broadway touring company staring Alice Ripley played last year at the Ordway and comparisons with this production are inevitable. But having seen both, I prefer the current production at Mixed Blood. (I should note that when I saw the touring company production, Alice Ripley had the night off.)

Under the direction of Jack Reuler, the current production may not be as polished as the Broadway show, but the smaller production provides a much more intimate performance. This is a more fitting approach to the topic of mental illness and its long-term debilitating effects on those afflicted as well as their loved ones.

Normal is a musical and, at times, a comedy about mental illness. It shows how the illness diminishes not only a person’s great potential but also damages their family in the process. It goes through the different phrases of treatment: talk therapy, medication, and electric shock therapy.  One of the most entertaining songs is the walz-like “My Psychopharmacologist and I” which comically runs through the various gambit of drugs for mental illness and their not-so-great aftereffects.

Tom Kitt composed the rock music score and Brian Yorkey wrote both the lyrics and book. The music is the show’s major impetus but while some tunes have very distinctive melodies, others have a certain sameness. Yorkey’s lyrics and book provide both great humor and sadness. Although Yorkey shows in-depth understanding of mental illness and its effect on a family, the story line of a traumatic event triggering the mental illness is disappointing. Most mental illness occurs due to reasons of chemical imbalance. There is seldom a major outside event that triggers it—only the stress that is inevitable in life.

Director Reuler has brought together an effective cast for the production. Although without great singing range, Aditi Kapil as the Mother and Thomas W. Jones II as the Father are effective singers for their roles. Kapil’s and Jones’s less-than-perfect singing is effective in portraying two adults who had the promise of their youth smothered by the debilitating effects of the Mother’s mental illness. Kapil renders a powerful performance showing how lost she was in her mental illness. Following shock therapy, Kapil convincingly conveys the character’s ability to finally gain some clarity in her life. Jones gives a compelling performance as a codependent spouse who is trying to do the right thing while he struggles to understand his wife’s illness and his role in her life.

Brittany Bradford is captivating as a daughter desperately wanting to be the center of her parents’ world but having to deal with the fact that her parents’ lives will always revolve around her mother’s illness. Bradford is an especially fine singer who gives great power to her songs. Ricardo Vazquez effectively plays the lost son both as a sympathetic and, at times, menacing figure. Regina Marie Williams brings her substantial singing chops to the role of a rock star Psychiatrist leaving the audience wondering if she is a reckless physician pushing her patients into unnecessarily risky treatments. Tom Reed, while not a particularly strong singer, does an excellent job of conveying a caring, but codependent, friend of the daughter.

The orchestration is provided by a scaled-down group of six musicians led by pianist Jason Hanson. I preferred the smaller ensemble since one of problems with the production at the Ordway was that the orchestra often times drowned out the singers, making it difficult to hear the lyrics. Between the toned-down orchestra and the visual display of the lyrics on each side of the stage, I was able to catch all the nuances of the lyrics which are so important to the show.

Set designer Joseph Stanley creates a horizontal stage area with multi-functional props that change fluidly as the cast moves from kitchen, to bathroom, to psychiatrist’s office, hospital, and living room. The set and abstract background projections serve to underscore the personal nature of this musical.

Even if you saw the Broadway version, the intimacy of Mixed Blood’s production brings its own quality to the story that is worth checking out. For those who are unaware, Mixed Blood is again offering free rush line tickets this season and Normal is definitely worth standing in line for if you can’t afford to reserve a ticket.