There has been little doubt that employment has been improving in the US. From the trough three years ago 5M jobs have been created. That’s not enough to fill the 12M or so that need to be created, but it’s a start – and it’s been steady progress. But who is being left behind as the situation (very) slowly improves?

The most important group are the young who are looking for their first job. Those 20-24 have a lifetime of expectations and habits created by the start of their career, and by any measure their outlook is not good. While the economy transforms itself into whatever will create the next wave of opportunity the young are being left behind. This is true throughout the developed world, particularly in Greece and Spain, but the problem is also acute here. Let’s start by defining the problem.

The best way to consider youth unemployment is a departure from the usual Barataria procedure. The “headline” unemployment rate is not very useful because it excludes so many “discouraged” workers who are no longer “actively looking” for work, even though many would very much like a job. This is a much better gauge for the young, however, who often go to school to develop the skills that lead to a career. It’s also the best data that our old friends at the St Louis Federal Reserve have to offer. From their wealth of information we have this graph of the headline unemployment rate in red with the same methodology used for those 20-24 in blue, since 1968: 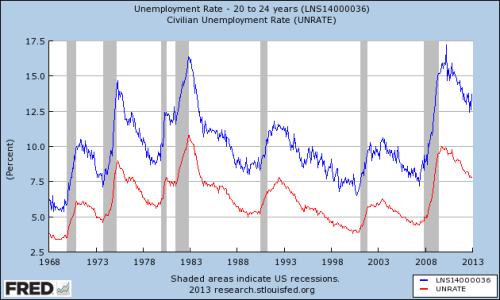 Note that the rate among the young always tracks about 3% higher than for all workers. The gap grows to 4-5% in the 1990s and 2000s, but becomes even larger more recently. Here is the same data since 2008, with the official “recession” in the shaded grey area: 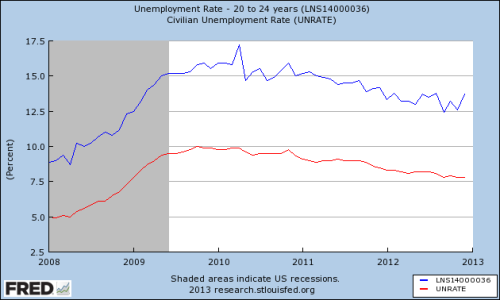 Note that at the peak in 2010 the overall rate was 10% but among 20-24 year olds it spiked over 17%. There is a lot of noise in these data so it’s hard to be too exact, but we can see trends. That gap of 6-7% has held and possibly even grown as the unemployment situation improves more slowly for the young. As of today the 7.8% overall rate is met with a 14.1% for those looking for a first job.

This is consistent with a job market that is primarily looking for specific skills to fill immediate needs, one characteristic of this labor market. Also, given that growth is coming more from small companies, the need for experience is probably even more acute. But the lack of manufacturing jobs is probably the main reason why youth are having trouble getting that first gig, as these are traditionally the jobs that someone can get into out of High School and grow on the job.

This is, however, a global problem that is very acute in the developed world. We’ve already seen how what we call “generations” are not really life cycles but economic cycles – a collection of attitudes created during the formative years that cycle with the boom and bust of opportunities. Will tomorrow’s citizens be defined by resentment and cynicism rather than the “can-do” attitude that comes from a rapidly growing economy?

The short answer is that we can’t count on an expansion of credit or an increase in consumer spending as long as 1 young person in 7 is unemployed. More to the point, the attitudes being formed will at the very least be more frugal and careful even if there is a strong recovery in a few years. This is a generation that will remember hard times, likely as long as they live – much like those who grew up in the Great Depression.

Is there any sign of improvement on the horizon? The trend towards reduced opportunity for the young has been growing for 20 years and has become very large lately. It’s not likely to change anytime soon, either. Given that it is much worse in other nations and this generation is inherently more global we can expect fairly bad attitudes to develop for a while.

While the economy is restructuring to whatever replaces the one that failed in the 2000s, those who will inherit the world are not doing well. It will be up to the young to make something happen, but they are not getting a break by any measure. Whatever the next economy winds up looking like, you can bet that it will at least be more cautious and less hopeful. We will have to see what that means.