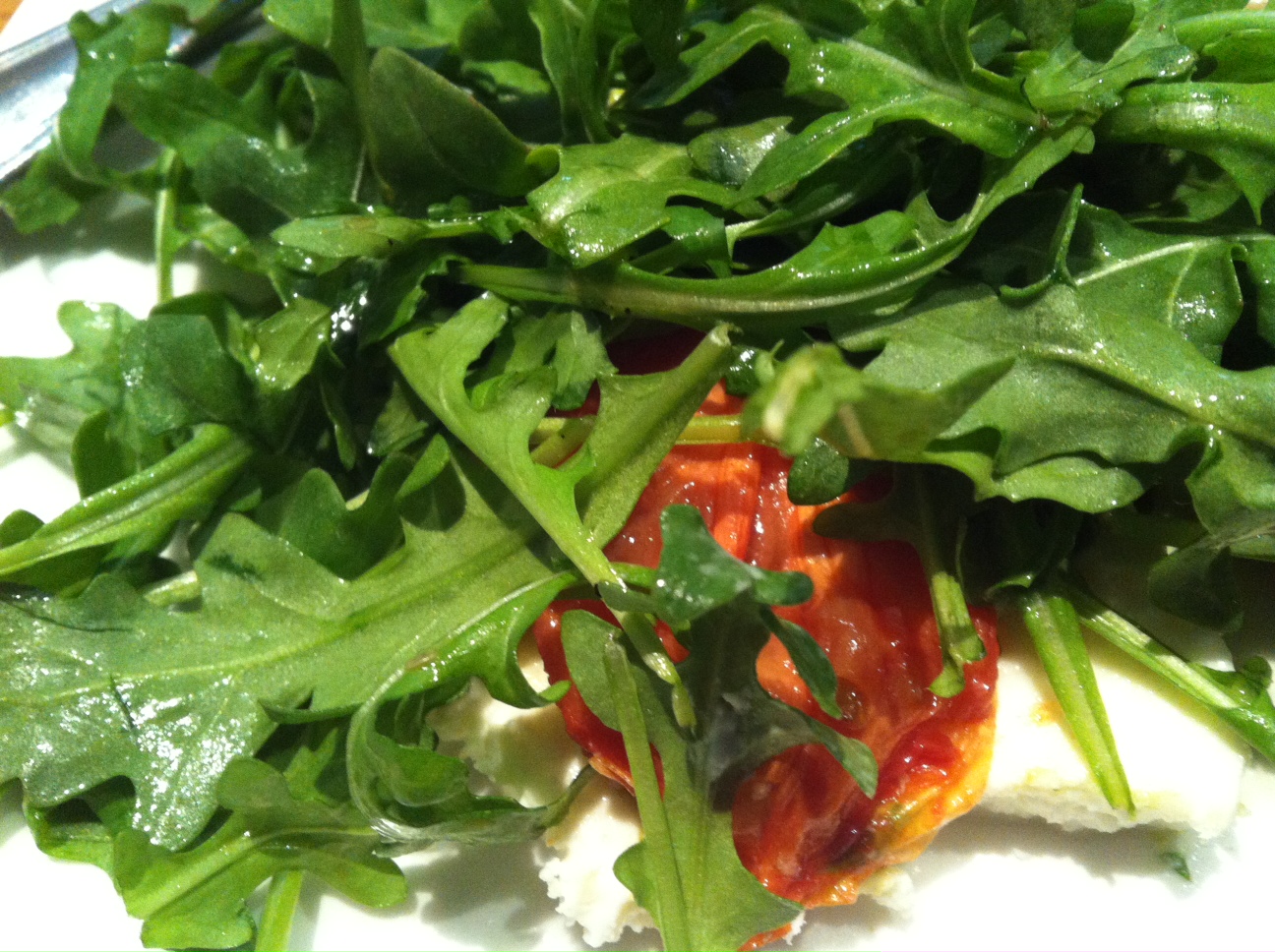 I recently found myself at a gathering of artistic luminaries in Minneapolis. (I was not one of them.) Someone posed a question to the group: Is New York still the cultural capital of the United States? A lot of presupposition went into that question, but the participants answered thoughtfully and judiciously. Some claimed that Minnesota was practically just as pretty darn good a cultural capital as New York City, darn it.

I’ve been in New York all week, where I’ve continued to ponder the question. I believe I’ve come upon the correct answer. The answer is, “Yes, of course. Don’t be ridiculous.” The more interesting question, however, is whether New York is the food capital of the United States. The answer to that one is, “No. It thinks it is. But it ain’t.”

I came to this conclusion after asking a variety of chefs and random hipsters about the latest New York-y food trends. You know what they think is cutting-edge? Cured meats. Locally-sourced vegetables. Mini cupcakes. Duh.

The bottom line is that New Yorkers have no idea what’s going on west of the Hudson River. A woman who runs a catering company in Brooklyn went on and on about how people in “the rest of the country” never eat fresh vegetables. I suddenly saw “the rest of the country” through her eyes: a wasteland of junk-food chains with fat slobs waddling in and out of them. This was so antithetical to the innovative, stimulating food scene in the Twin Cities that all I could do was stammer, “…sustainable …Minnesota …organic …I don’t think you …well, bye.”

Nevertheless, I did come upon a few up-and-coming items I hope we see more of.

1. Water. What? Yes, plain old tap water, no ice. There’s a trendy bar in Brooklyn — so trendy that it was mocked for its trendiness in episode 2 of HBO’s Girls — where as soon as you sit down at the bar, they give you a nice little glass of plain, non-freezing water. Since you’re about to order an ubertrendy cocktail with a variety of alcohols, doesn’t it make sense to start with a salubrious glass of nothingness?

2. Weird, fruity doughnuts. Try a fat raised doughnut with blood orange frosting and a twist of candied orange, or hibiscus frosting with a little glob of toasted flowers on top. 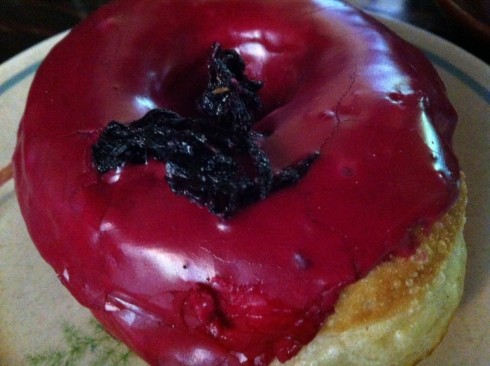 3. Kale is suddenly appearing in salads where formerly it was scorned as too bitter or tough. 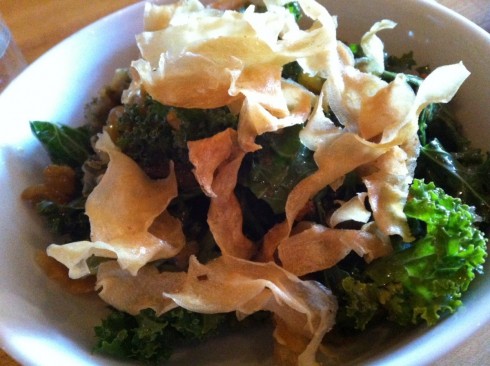 4. Pudding: whole stores full of it! This has to be some kind of regressive trend, because it tastes a lot like Gerber baby food. Good, though. Speaking of shops that sell nothing but one smushy item, I also came across a mayonnaise shop, where they sell literally nothing but mayo. 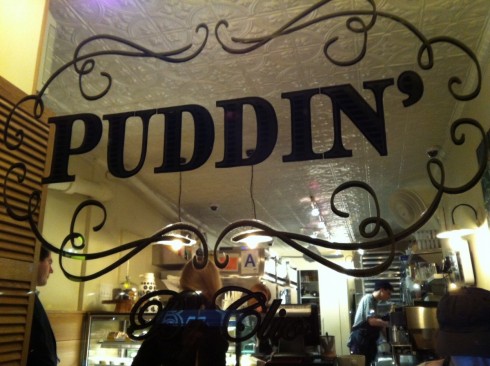 5. Deep-fried hamburgers. I know, this sounds like a gastritis-inducing State Fair food. But there’s a place called Korzo Haus where a Slovak couple invented a way to deep-fry burgers in Hungarian bread, resulting in a light, crispy, flavorful, completely un-greasy sandwich. Yes, it’s a miracle. Village Voice named it the best burger of 2011. 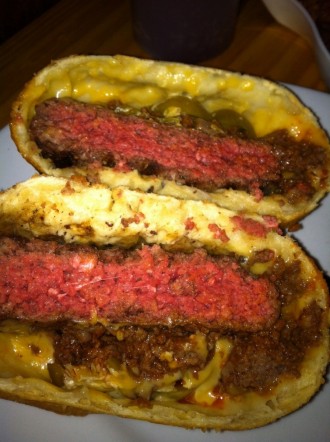 6. Radishes as free bar snacks. They’re surely better for you than peanuts or pretzels, although they don’t taste too great with red wine. I saw some people double-dipping into the salt, which probably isn’t sanitary. But since radishes grow so prolifically in Minnesota gardens, might as well use some of them this way. 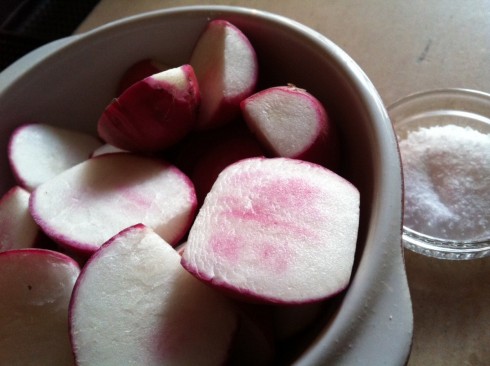 7. Ostentatious store names. Hey, we can do this, Minnesotans! We don’t have to give restaurants boring names like “Five” or “Cafe 128.” 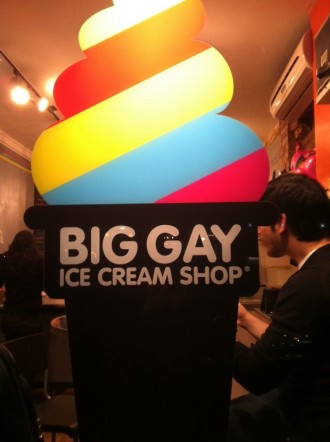 8. Ramen-o-rama. It’s just noodles and stuff in broth, but it’s so much more. There are dozens of restaurants serving nothing but ramen, and it’s astronomically more flavorful and complex than your average noodle soup. 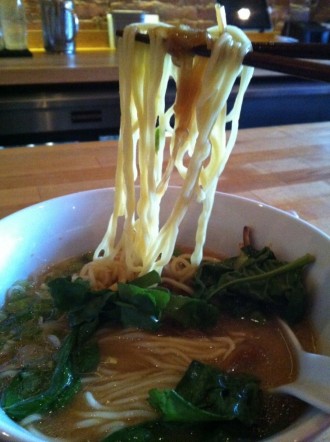 I had all kinds of food vendors telling me about their amazing organic beef hot dogs, or educating me about how important it is to find fresh local ingredients. I felt like saying, “I’m from the Midwest. Where do you think food actually comes from?” But it’s no use. They think that just because New York has better ballet and more art museums than the rest of the country, the rest of the country simply doesn’t exist. Well, my fellow junk-food eating fat slobs, let them wallow in their ignorance. But let’s get busy on those pudding stores, shall we?