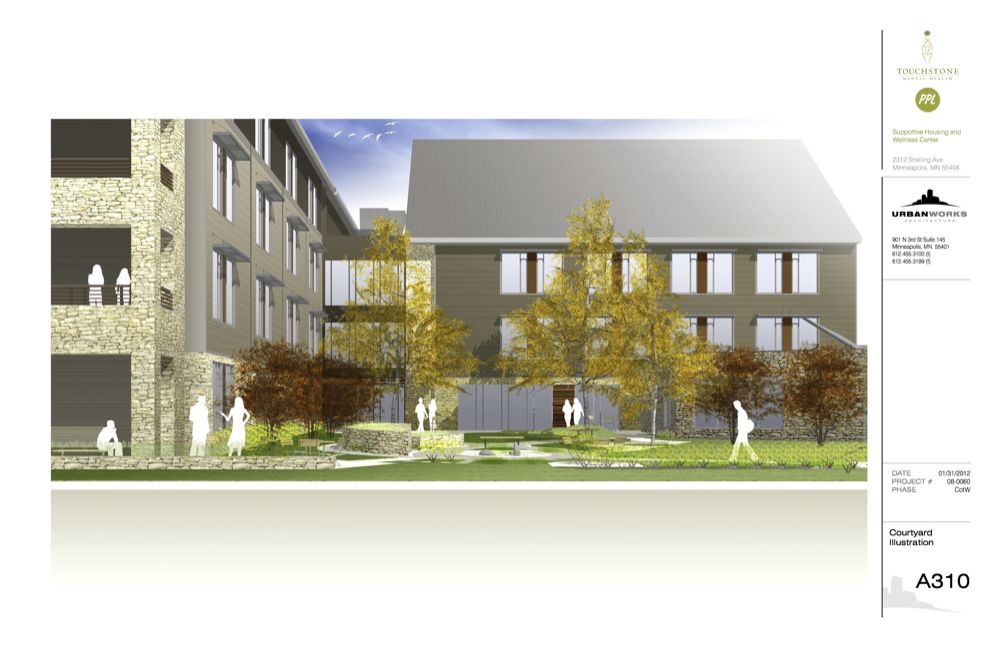 Part of Seward’s industrial western edge will soon get a dramatic facelift. Ground is slated to be broken later this spring for phase one of Seward Commons, a mixed-use, transit-oriented development project, focused on housing.

FULL DISCLOSURE: Bruce Johansen currently serves on the Redesign and SNG boards, though he was not on either board when the project was approved. Sheldon Mains is the chair of the TC Media Alliance Board.

Redesign, Inc., a community development corporation based in Seward, acquired the 3.8 acre site in 2009, and is serving as master developer. Previously known as the Bystrom Bros. site, Seward Commons is located just southeast of the Franklin Avenue light rail station.

Long-time resident Sheldon Mains, a Seward Neighborhood Group (SNG) board member, says he’s “somewhat surprised” at how smoothly the process has gone. A primary reason it has, he says, is that neighborhood residents have been informed of plans, and had their questions answered, each step of the way.

Phase I of the project, Touchstone Rising Cedar, will feature a Health and Wellness Center dedicated to supporting the holistic needs of adults living with mental illness. The first-of-its kind facility in the U.S. will offer an array of services and support for people with medical and mental health challenges. Also on-site will be 40 apartments, around-the-clock staff support, and offices. The complex will be built at Snelling Avenue and East 24th Street, on the southern edge of the site.

Touchstone Mental Health is partnering with nonprofit developers Seward Redesign and Project for Pride in Living (PPL) on this portion of Seward Commons. PPL will own the building and Redesign the land. Touchstone will take care of managing and staffing Rising Cedar. The project promises a minimum of 25 new jobs. Touchstone’s office will move to Seward, bringing an additonal 40 existing jobs to the neighborhood.

As they planned for this project, staff reviewed research and identified environmental factors that can contribute to longer-lasting control of brain illness. Information was then shared with architect Jeffrey Schonecke of UrbanWorks Architecture, who used it to design the apartments and wellness center.

In addition to offering a “healing environment,” says Jennifer Baumgartner, “What’s really nice about the project are some of the community components.” Touchstone’s development director has been meeting with SNG community coordinator, Kerry Cashman, to discuss ways of integrating the neighborhood into Touchstone’s horticulture therapy and training program. The two are also talking about ways to involve clients in Seward events, such as King’s Fair and the annual arts festival.

Baumgartner says Touchstone is excited about helping to “green the space” of Seward Commons by working with neighborhood artists and Growing Lots’ urban farmers Stefan Meyer and Michael Pursell. “We are just glad that we get to be part of an active, vibrant community.” She adds, “Seward residents should be proud that their neighborhood will be the anchor site of programs that can be replicated nationwide.”

Sheldon Mains, who served as SNG’s board president during much of the planning process, reports that there have been numerous public presentations and discussions about Seward Commons, especially its first phase, at neighborhood association and development committee meetings. He says there’s been “general approval,” following “a fair amount of hesitation” initially.

Mains observes that the community’s support came quickly for several reasons. For one, the site is fairly removed from the rest of the neighborhood. For another, Seward has a history of supporting low-income and supportive housing. He notes that SNG took the lead in preserving affordable housing at the two Seward Towers high rise complexes when a previous owner wanted to convert them to market rate. However, Mains gives much of the credit to partners Redesign, Touchstone, and PPL, “for coming to the neighborhood really early and being very honest with the community.”

“This has been a terrific example of how to involve the public,” says Mains. He adds that Redesign’s former associate director, Katya Pilling, “really knew how to work with the community and was committed to transparency and involving the public.” He also emphasizes the importance of Touchstone’s executive director, Martha Lantz, coming to meetings. Lantz answered questions and told about Touchstone’s other programs in the neighborhood. That those attending had to ask about locations, “just proved that Touchstone’s developments are so well managed that neighborhood residents don’t know where they are,” says Mains.

Baumgartner says that the nonprofit operates other assisted living facilities, one of which is in Seward. “Touchstone has been part of Seward for over 30 years, so Rising Cedar is really an expansion of our current presence.”

Rising Cedar is now fully funded, with over $11 million having been raised so far. Funds have come from a variety of sources, the main one being proceeds from low-income housing tax credits. County, state and federal sources will pay operational and program costs. Touchstone plans to raise another $2 million to add furnishings and special features, and to subsidize programming during the first two years.

Phase II of Seward Commons, Snelling Apartments, is a partnership between Redesign and CommonBond Communities, which will provide 60 units of affordable housing to seniors. According to the project overview, “This 100% affordable project will provide safe rental homes for seniors ages 62+ along with serving three households that meet HUD definitions of physically disabled.” A CommonBond Advantage Center with staff and resources for residents is one of the project’s features. 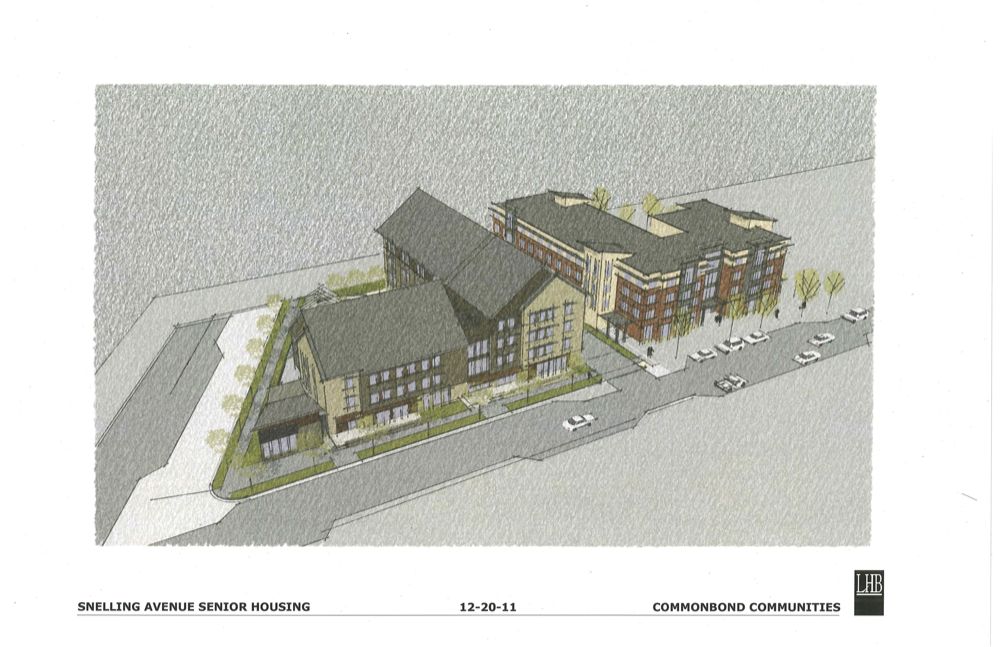 Like Touchstone, CommonBond has a long history in Seward, having developed and managed affordable housing and provided support services in the neighborhood for over 40 years, most prominently at Seward Towers East and West. As with Rising Cedar, attention is being given to ways of integrating Snelling Apartments residents into the surrounding community and encouraging interaction among residents in on-site community rooms and spaces.

This phase of Seward Commons has received a commitment of over $9 million from a federal HUD program and additional commitments for funding to correct environmental contamination at the site. Redesign board president, Tom Burke, says the prospects for raising the additional funding needed are very good. Construction should begin in 2013.

Snelling Apartments will be built to Minnesota Green Communities standards, which means it will feature Energy Star appliances, Water Sense fixtures throughout the building, and CFL or LED lightbulbs. Residents will be educated about green initiatives, energy conservation, recycling and waste reduction.

Long-Range Impact on the Neighborhood

Redesign’s executive director, Brian Miller, has said that housing, in a mix of prices and density, will be the main element of Seward Commons, but that the transit-oriented component will be obvious. “A regional bike path and parkway will be outside the Commons’ back door, and the Franklin Avenue LRT station is less than a block away. ‘People won’t even have to cross the street to get to the train,’ Miller said.”

As the project’s five phases continue to unfold, office and retail elements are expected to be part of the mix. SNG’s Sheldon Mains says he would like to see some market rate housing added, along with office space and “a little bit of retail.” He doesn’t want this to become a retail hub, taking business from Franklin Avenue’s shops, but thinks that “a few stores serving the needs of tenants and light rail users would be useful.”

Attention is also being paid to green space and streetscapes that will aid in managing storm water collection and infiltration, while making the area more attractive. Enhancing safety for pedestrians and bicyclists is another priority. To that end, realignment and repaving of streets will occur.

Since acquiring the Bystrom Bros. site, Redesign has been leasing and managing space to a variety of companies and nonprofits. It has served as ad hoc incubator space for a variety of small profit and nonprofit startups, including Free Geek, Growing Lots, Sisters Camelot, and Fun City Dogs. Keeping buildings occupied has helped Redesign pay taxes on the space and maintain it.

This spring, Growing Lots Urban Garden will begin operations at a more permanent space at Seward Commons. The Seward Bike/Walk Center, or SPOKES, is also scheduled to open. Mains, who is that project’s lead, expects programming to start at the Snelling Avenue location in mid-June, and anticipates holding a grand opening and offering open shop hours beginning in mid-July. Expanding the bike library, he adds, is unlikely to occur until the following spring.

“We hope to have a development that integrates well into the Seward community,” says Carol Carrier, Redesign’s board vice president. “This means, for example, that the Bike Walk Center will be used by many residents of Seward. It means that the connection to walkers and bikers and the LRT Station is well defined, well-lit and safe. We hope to use Seward Commons to beautify this end of Seward, as a great bookend for the neighborhood.” Board president Burke adds, “This is a long-term development site that will influence surrounding properties for years to come.”