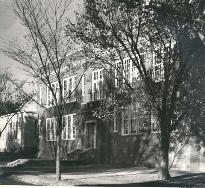 The Northrup building will be home to a school again in 2014 when Hiawatha Academies shifts its elementary grades to the building.

A new school is moving into the neighborhood. Its name may cause some confusion with an existing school.

Currently, the Ericsson building at 4315 31st Ave. S is home to the Northrup School, a magnet school (not a community school) which moved there in 2005. The Ericsson school was closed by the school district because of declining enrollment. It had dropped to less than 200 students, while the Northrup program didn’t have enough room at the Northrup building and had a waiting list. (In 2009, the district also considered moving Northrup into the Folwell building, but then abandoned the plan.)

Fast forward to this year, when enrollment is increasing in south Minneapolis. To meet the need at their school, the Hiawatha Leadership Academy has decided to expand to three campuses, and will be opening its new location at the Northrup building at 1611 E. 46th St. in 2014. The new school will be called Hiawatha Leadership Academy—Northrop (in contrast to the Northrup Urban Environmental Learning Center at the Ericsson building).

The new school will open its doors to 78 kindergarteners in August 2013 at the Hiawatha Leadership Academy – Morris Park location, and will grow by a grade at a time until it serves 390 students in grades K-4. Hiawatha will invest $4 million into the building.

United Properties had also sought to buy the property in order to construct at least 30 units of senior housing, and offered $200,000 more than the school.

Hiawatha Leadership Academy – Northrup is currently accepting applications for its incoming kindergarten class. Interested families can contact the school at 612-987-5688 or www.hiawathaacademies.org.

On March 12, 2013, The Minneapolis Public School Board of Directors agreed to sell the Northrup School building located on 46th Street near Bloomington Avenue, for Hiawatha’s future use. The purchase offer was made by Charter School Development Corporation (CSDC), a non-profit organization that has been a long-term partner of Hiawatha Academies and currently owns its Morris Park building. Hiawatha Academies will lease the Northrop building from CSDC.

Daniela Vasan, a former Teach for America Corps Member in Atlanta, will plan the opening of the new school at the Northrup building.

Hiawatha Academies, with a mission to empower its students with the knowledge, character, and leadership skills to graduate from college, opened its first school, Hiawatha Leadership Academy, in 2007 in the annex classrooms of St. Joan of Arc church in Minneapolis. In 2009, the school moved to the former Morris Park Elementary School building at 3810 E. 56th St. in Minneapolis, where it now serves 400 scholars in grades K-4. In 2011, a second school, Adelante College Prep, was opened in a former Catholic school at 38th and Pleasant Avenue South in Minneapolis. Eventually, Adelante College Prep will serve 320 students in grades 5 through 8. The school eventually plans to serve 2,000 students at five campuses.

Consistently, over 70% of Hiawatha scholars score proficient or advanced on the Minnesota Comprehensive Assessment. Hiawatha Academies currently serves a student population that is 95% free or reduced lunch eligible, 98% students of color, 85% Latino, and 75% English Language Learners.

In May of 2012 Hiawatha Academies was ranked the #1 school for closing the achievement gap in Minnesota.

WHO WAS JOHN ERICSSON?
He was an engineering genius who later developed and improved power transmission. As a young boy he developed and interest in engineering and at the age of thirteen he produced technical drawings for the Gota Canal. He invented the ship propeller and later designed and built the Monitor for the Union Navy during the Civil War.

WHO WAS CYRUS NORTHRUP?
Cyrus Northrop was born on September 30, 1834. He was a leader, teacher, orator and the second President of the University of Minnesota.

His 27 year term was the longest of the presidents. He was a peacemaker and expanded University programs to include Education, dentistry, law, medicine, pharmacy, nursing, and forestry. He won the hearts of students, faculty, and the state.