“In the Shadow of the Great Recession: The State of Working Minnesota 2013” from the Minnesota Budget Project tracks the change in wages of workers at different wage levels. Drawing on data compiled by the Economic Policy Institute, the report notes that the real wages of low-wage workers have grown little since 1979, while high-wage earners have enjoyed a 26 percent increase. From 2007 to 2012—a period which encompasses the Great Recession—wages fell by two percent for low-wage workers, increased by two percent for high wage workers, and stayed flat for median income workers. Minnesota is also experiencing distressing race and gender wage gaps. According to the report:

“Even though the state’s economy is slowly improving, many workers are struggling to climb out of the Great Recession. They are still looking for jobs, working part time, earning less than they did before the recession, or accepting jobs that don’t meet their abilities.”

The Growth & Justice report, “Widening Economic Inequality in Minnesota” (the subject of a recent Hindsight blog post), documents the growth in income inequality in Minnesota and the U.S. Based on three distinct measures—the poverty rate, the share of income concentrated at the top, and the “Gini coefficient” (a statistical measure that takes into account the distribution of income across the entire income spectrum)—inequality in Minnesota has increased since the turn of the century. While acknowledging the impact of technology and globalization on economic inequality, the Growth & Justice report concludes that:

“Public policies could have largely or completely mitigated the effects of technological changes and globalization. Further, we believe that government policies enacted over the last thirty years have not only failed to mitigate the effects, but have independently increased poverty and inequality.” 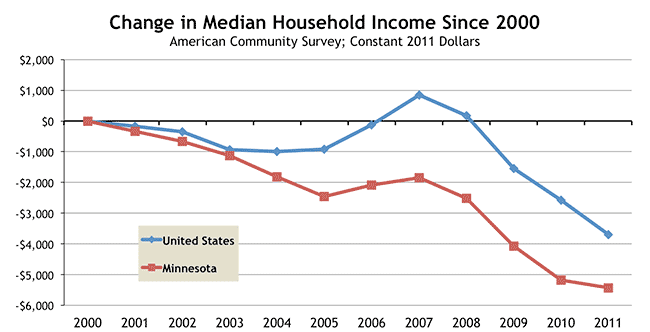 “Our [Minnesota’s] median household income remains higher and our inequality and poverty rates are lower than average, but much of that favorable relative standing has disappeared since 2000. Our income is declining and inequality is rising absolutely and relative to other states. Over the last 10 years, we have fallen from 9th lowest Gini to 13th. Our poverty rate has worsened, from the 3rd lowest to 11th lowest.”

It is worth noting that Minnesota’s deteriorating performance relative to the rest of the nation in terms of median household income, poverty rates, and income disparity largely coincides with a decade during which the “no new tax” agenda largely dominated state fiscal policy. As demonstrated in a recent Minnesota 2020 analysis, these policies were largely successful in reducing public investment in Minnesota, as demonstrated by the 7.2 percent drop in real per capita state and local government spending since 2000—the 4th largest rate of decline among the fifty states. However, these policies appear to have done nothing to improve Minnesota’s relative economic performance.

The growing trend in wage and income inequality is a cause of concern because it undermines the prospects for a robust and sustainable economic recovery. Nobel Prize Economist Joseph Stiglitz explains it this way:

“…the sharp rise in inequality – especially in the United States, which has the greatest inequality gap in the advanced countries – is holding us back. The lack of aggregate demand that has resulted from this inequality is a key factor hindering a return to growth. Simply, those at the top where wealth has concentrated spend much less of their income than those at the bottom or in the middle. So, demand drops. If we want to restore growth, and therefore full employment and greater tax revenues, we need to address the underlying problem of inequality.”

Both reports outline policies for addressing and reversing wage and income inequality. The Budget Project report recommends increasing the minimum wage, improving access to affordable education and job training in order to improve the earning potential for low-wage households, improving access to affordable health care, ensuring that more children have access to early childhood education to improve their chances of succeeding in school while also allowing their parents to work, and a strong unemployment system that will allow workers to make ends meet while they are seeking new work. Growth & Justice recommends preparation of an “Economic Inequality Impact Assessments” for proposed state laws and regulations to assess their impact on income inequality.

To this list, Minnesota 2020 would like to add reducing tax regressivity, which would have the effect of reducing the disparity in after-tax income between low- and moderate- versus high income households. Progress on this front was made during the 2013 legislative session, but Minnesota’s state and local tax system remains significantly regressive. Perhaps the single most important thing that can be done to reduce wage and income inequality is to strengthen the ability of workers to bargain collectively for wages and benefits.

Another Nobel Laureate economist, Paul Krugman, recently observed that “We have a society in which money is increasingly concentrated in the hands of a few people, and in which that concentration of income and wealth threatens to make us a democracy in name only.” The Minnesota Budget Project and Growth & Justice reports provide useful insights into this distressing trend and what can be done about it.

*The 2003 and 2013 editions of ITEP’s “Who Pays: A Distributional Analysis of the Tax Systems in All 50 States” provides information on the distribution of income within Minnesota and the fifty states in 2000 and 2010. Using this information, it is possible to construct measures of the degree of income concentration in Minnesota and the entire nation. Using completely independent data, Minnesota 2020 has confirmed the trends in growing income inequality in Minnesota relative to the rest of the nation reported in the Growth & Justice report.

‡A Minnesota 2020 analysis of data provided by Growth & Justice found the relationship between median household income and income inequality as measured by the Gini coefficient to be statistically significant.