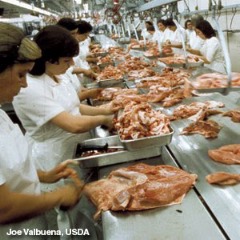 Mohamud Kahin left his war-ravaged country five years ago, promised his siblings in Somalia they would never have to go to bed unfed and rolled up his sleeves for a new life in the United States.

Kahin arrived in Minneapolis in 2007. He has never been to school, and English remains a forever-foreign language to him.

It’s almost impossible to find a job around the Twin Cities, his relatives in Minneapolis told him when he first arrived. They gave him the most common advice given to a new adult immigrant with no English: go to the meat processing companies.

In 2008, he moved to Postville, Iowa, joining hundreds of Somali immigrants with similar stories. The 26-year-old Kahin got his share of large knives and cleavers on the fast-moving animal slaughtering and processing lines of Agri Star Meat & Poultry LLC — formally Agriprocessors. It’s the largest producer of kosher meat in the country and the biggest employer in Postville.

Kahin worked more than 40 hours a week as a meat packer in both frigid and oven-like conditions.

“My feet got really swollen,” Kahin said of the first few weeks of the job, speaking in Somali. “There were blisters on the bottom on my heel. The pain was constant.”

He had to stick with the job so he could send $500 a month to his family in Kismayo — it was a way to keep the promise he had made to his siblings: they would never go to bed hungry.

The plight of workers in the meatpacking industry

The Midwest Coalition for Human Rights released a report in October, revealing that meatpacking remains one of the most dangerous jobs in the United States and also documenting concerns about human rights. With little or no training, the report said, workers are handed sharp knives and saws to put into action in confined, rapidly moving production lines.

“Workers often suffer from serious cuts and crippling repetitive motion injuries such as severe carpal tunnel and tendonitis that can permanently impair the use of their hands, arms, and shoulders,” the 25-page report stated.

We are packed in a small space, there is not enough space, we are shoulder to shoulder, there is no room to move, some cut in one direction, others in the other, the chances to harm a co-worker are high.

I cannot even bend my fingers; I have destroyed my hands and harmed my body.

We have to sharpen our tools at the same time as we are working, then the pieces accumulate, we have less space and we have to rush even more.

I passed out; I was washing the band where the turkeys are killed with gas. I don’t know too much about it, or if it is related to the gas, but if you are cleaning that band and get splashed with that water, it harms you.

These are stories Kahin said he experienced on the production lines, until he became unemployed in October.

Who are the employees at the meat processing industries?

According to the report, 20 to 50 percent of workers at meat processing industries are immigrants and refugees from Africa, Central America, and Mexico.

More than 30 years ago, meatpacking and processing industries were located in the heart of Midwestern cities, including St. Paul, Chicago and Kansas City. New immigrant workers and many Americans in the industries enjoyed “comparable salaries to middle-class workers in the auto and steel industries,” according to the report.

In the early 1980s, however, these jobs were relocated to rural parts of the Midwest and South because “of a much broader reorganization of the industry,” the report said. And a sharp decline in wages has followed.

Today, new immigrant communities, documented or undocumented, are finding themselves in rural areas in search of meatpacking job opportunities.

Like Kahin, Kadar Elmi’s need for a job sent him to Cargill Meat Solutions in Fort Morgan, Colo. just four months after his arrival in Virginia in 2008 as an immigrant from Nairobi, Kenya.

Elmi said he joined the mix of about 2,000 Somalis  he estimated were living in Colorado and who moved there for meatpacking jobs. Now they’re settled in the state where many of them have started families.

Elmi, who left the meatpacking job in June for Minneapolis to find a truck driver opportunity, had spent four years in Colorado. He worked for Cargill Meat Solutions for the first two years, then for JBS Swift & Co. in Greeley for another two years.

He worked either in an extremely hot or cold environment. Many times, Elmi spent more than 40 hours a week in the odorous slaughterhouses with intense heat and poor-ventilation. Other times, he worked under extremely cold conditions, wearing steel-capped shoes, hard hats, aprons and arm-guards.

With large cutting equipment, Elmi sliced beef and lamb into different sizes. Production lines were fast and break time was too short, he said.

“That’s definitely one of the hardest jobs a man can do,” Elmi said.

Many meatpacking immigrant workers are undocumented or don’t speak enough English. Most don’t know their rights as employees or are afraid to complain. Consequently, they fall victims to supervisors.

“Abuse was often based on race, ethnicity, and immigration status,” the report said. “Undocumented immigrants were insulted and singled out for the worst jobs because they were unlikely to complain.”

Two years ago, JBS Swift was alleged to be a hostile work place for the Somali and Muslim workers because of their race, immigration status and religion, according to a 2010 news release from The U.S. Equal Employment Opportunity Commission (EEOC).

“Supervisors and coworkers threw blood, meat, and bones at the Muslim employees and called them offensive names,” according to the EEOC lawsuit. The complaint also called attention to offensive graffiti in the JBS Swift restrooms, which included “Somalis are disgusting” and many profane comments about Muslims and prophet Mohamed. The lawsuit was pending as of July.

Kahin and Elmi also stated that many people were fired because they left for a few minutes for prayer time. Those who asked supervisors to move their break to the prayer time were not accommodated.