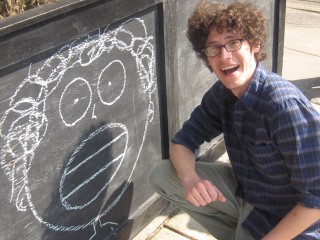 The Nicollet owner, Michael Graca, shows off his drawing skills outside of the shop.  (photo by Paige Elliott)

The Nicollet coffeehouse, with its quaint and modest allure, strikes a contrast to the bustling neighborhood surrounding it. Since reopening under new management in October, The Nicollet has quietly gone about reintroducing itself to the community. The recent expansion of evening hours–the shop is now open every day until 10 pm– is a signal that the The Nicollet is finding its footing along the Eat Street corridor of Nicollet Avenue.

On the day I visited The Nicollet and spoke with new owner Michael Graca, the place hummed with the sound of chatting students, brewing coffee, and the warm notes of jazz piano playing in the background. Here’s the interview, edited for space and clarity:

What is your vision for the new, reopened The Nicollet? How do you see the business expanding over the years?

I think that the problem with this space in the past is there hasn’t been a solid vision. And no one seems to know what this space is supposed to be. Is it a coffee shop? Is it a bar? Is it a venue for music? Is it a venue for theater? Is it a restaurant?… The way I’ve decided to handle the vision for this space, is to treat it as a process of evolution. Starting with the things that I know, which is coffee and being happy and nice… and basic breakfast items. From there, it’s a matter of enlisting the perspective of the community to understand what the space is supposed to be, in terms of a venue or a space for the public to come and engage in the community in a profitable way.

What sets The Nicollet apart from the other coffeehouses, particularly Starbucks across the street? Barista, Sean Lynch, enjoys a chai latte after a long day of work. (Photo by Henry Hendricks for Dreamery Studios)

If we’re specifically talking about Starbucks, my goal is to provide a local independent coffeehouse that is safe and clean and efficient and good in terms of the quality. And if we can provide those, I think people would prefer to come here over other places…That being said, just because we’re a local independent [coffeehouse] doesn’t mean that the business that we get is charity. I want you to come here because you like it, not because you want to give me your business because I’m a mom and pop coffee shop, you know what I mean? So I think if we strive for those standards, people will naturally decide to come here, hopefully.

This particular corner has seen quite a few businesses come and go over the years. What are some of the challenges you face as a business owner in this particular location and how do you see yourself overcoming them?

Right, well, before I got Boiler Room Coffee. I came here when it was Tillie’s Beans. I had dropped out of school and I was managing a coffee shop, and I decided I wanted to start my own. So I came in and I could tell it just wasn’t doing well. And I thought, well, maybe they want to sell it? And I came in…[Editor’s note: Graca also owns Boiler Room Coffee, which is located a few blocks away at 1830 3rd Avenue South, Minneapolis]

So you just came in…you were a customer and just asked if they wanted to sell the place? That’s pretty bold… Yeah, I didn’t even know where I was gonna get the money but yeah…(laughs) I was desperate…But what attracted me to this space was the history for one. And you forget when you’re in a space for so long, it is a beautiful space…I’m sure you’ve heard of Acadia. It seems to me like after Acadia left, it was a difficult space for people to come and spend money. The Nicollet owner, Michael Graca poses for the camera. (Photo by Paige Elliott)

This is a fairly busy intersection–have you encountered any problems with loitering or anything?

No, my staff has a well communicated understanding of what’s acceptable and they’re able to communicate that to the problem people and then they don’t come back. I found that people inherently don’t wanna make fools out of themselves, so if they come in and can tell that this isn’t the right place to be causing problems, they usually naturally will just leave…

Do you see The Nicollet as similar to Boiler Room Coffee? How is it different?

Well what I found out with Boiler Room Coffee and what it’s become is, I only have a certain amount of control over what a place becomes and then from there it’s a very organic process with the customers and the people who choose to come. They create the sense of community. The Nicollet keeps things lively by rotating artwork from artists within the community. Left: Digital prints by Lucas Gluesenkamp (Photo by Paige Elliott)

And you use local artists for the artwork on the walls?

Yeah, every three months we’re changing the artwork and artists, through our art and event manager, Sarah Jordet, who also works a lot in the neighborhood with SSCO, the Stevens Square Community Organization. And she’ll do the curating for Red Hot Art this summer, and will be holding a fundraiser here called ART SQUARED, which is a fundraiser for SSCO…So she helps me curate the walls and we’re booked a year out already, and she’s also gonna help me with the events and entertainment. She’s awesome. I’m very lucky! The battered crates of old funk and soul records may be gone, but The Nicollet is not without its random charms: an old typewriter rests on a stage with an invitation for patrons to share their thoughts. (Photo by Paige Elliott)

You’ve recently expanded your hours…What other changes or happenings can patrons expect in the coming months? Will there be an expansion of the menu? What do you want everyone to know?

One thing I want everyone to know is that we’re new, and under new ownership, and you should just come in and try it, darn it! (laughs) As for what to expect, I always hate answering this question…I’d rather under promise and over deliver. You will see an increase in options for food and beverages, with the hopes of adding beer and wine. It’s a long process so I can’t estimate when. And we will begin to introduce entertainment…we won’t right away have a nightly act or program, but you’ll start seeing more activity on the stage.

Food offerings at The Nicollet (below) range from truffles to waffles, soup to sandwiches. (Photos by Henry Hendricks for Dreamery Studios)