UPDATED 3/15/2010—As Minneapolis and St. Paul continue to confront cuts in funding to cities currently being made in state and federal budgets, taxpayers are bearing much of the brunt, both through higher property taxes and diminished services. This is confirmed in a report recently issued by State Auditor Rebecca Otto. Responding to complaints from some vocal tax payers, Minneapolis’s mayor and council have found themselves pressured to scale back on previously proposed property tax increases. Diminished dollars from that primary source have forced deeper cuts to the adopted 2011 city budget, with widespread implications for the level of services and investment in infrastructure that residents of that city can now expect. While the situation in St. Paul has been calmer so far, the mayor has expressed his nervousness, as everyone waits to see how federal and state budget cuts will impact levels of funding to cities.

At the federal level, President Obama released a budget plan in February that would trim $300 million, or 7.5 percent, from the 30-year-old Community Development Block Grant (CDBG) program. CDBG provides $4 billion to cities annually, largely to help with affordable housing and job training for lower income people. Republicans in Congress would like to cut CDBG by over 60-percent in 2011, and eliminate it entirely in 2012. Mayors from across the country and both political parties have become vocal in their dissent. Tom Link, community development director for Inver Grove Heights, has said of CDBG, “Basically, it’s one of the few federal programs available to local governments to address housing needs.” Philadelphia Mayor Michael Nutter compared the proposed cuts to a “bazooka pointed at cities,” saying, “There are cuts, and there’s insanity, and this is insanity.” And that’s just CDBG. VISTA, AmeriCorps, and Head Start are among the federally-funded programs that benefit cities, and are currently on the Congressional chopping block.

Minnesota Governor Mark Dayton has proposed a state budget with no additional cuts to county and city governments. The League of Minnesota Cities notes that appropriations to cities were already reduced in a supplemental budget bill during the 2010 session. Still, Republican legislators are pushing for deeper cuts. They propose eliminating up to 18 percent of the state’s current level of funding to cities. According to Minnesota Public Radio, “Some city officials have argued that more state cuts will be too painful. But many also acknowledge that some kind of ‘new normal’ has emerged. Bumpier roads and less policing may be inevitable; so might higher property taxes.”

Judith Martin, a professor at the University of Minnesota, who served as president of the Minneapolis City Planning Commission for eight years, and a member for 15, is among those troubled by declining investment in even the most basic public services that cities are called to provide. This includes street repairs, snow removal, and keeping schools in reasonable condition. “When basic caretaking is not getting done, then you’ve got problems,” said Martin. 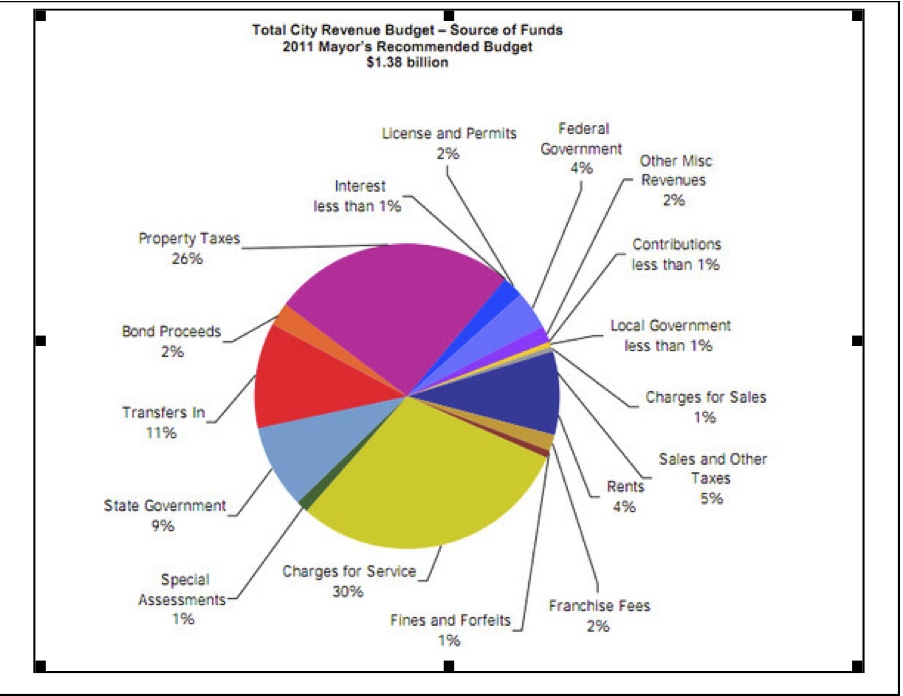 Minneapolis, sources of revenue. Illustrates how little funding the City of Minneapolis currently receives from federal and state governments, especially relative to the amount of money that now comes from property taxes and charges for services.

Police, potholes, paychecks and pensions were major components of the 2011 budget proposed by Minneapolis Mayor R.T. Rybak in August. Additional priorities were transit-oriented development and other projects designed to “grow the City’s tax base.” That was before sufficient numbers of constituents voiced their opposition to a proposed 7.5 percent property tax increase, intended to help cover the costs of programs and services. The mayor and council members took notice, and in the end, a budget was approved with a reduced 4.7 percent property tax increase. Adjusted for inflation, this year’s budget has the City of Minneapolis spending less in 2011 than it did 10 years ago.

With shrinking revenues have come cuts. According to its website, the City of Minneapolis will eliminate approximately 80 jobs in 2011, reduce funding for affordable housing, and cut back spending on projects at the city-owned Target Center. The Minneapolis Park and Recreation Board and the Municipal Building Commission will also see reductions in funding. In anticipation of possible cuts in state aid to cities from federal and state governments, the budget was delivered with a “plan B” attached. Further cuts would affect the road repair budget and force layoffs at the fire department. 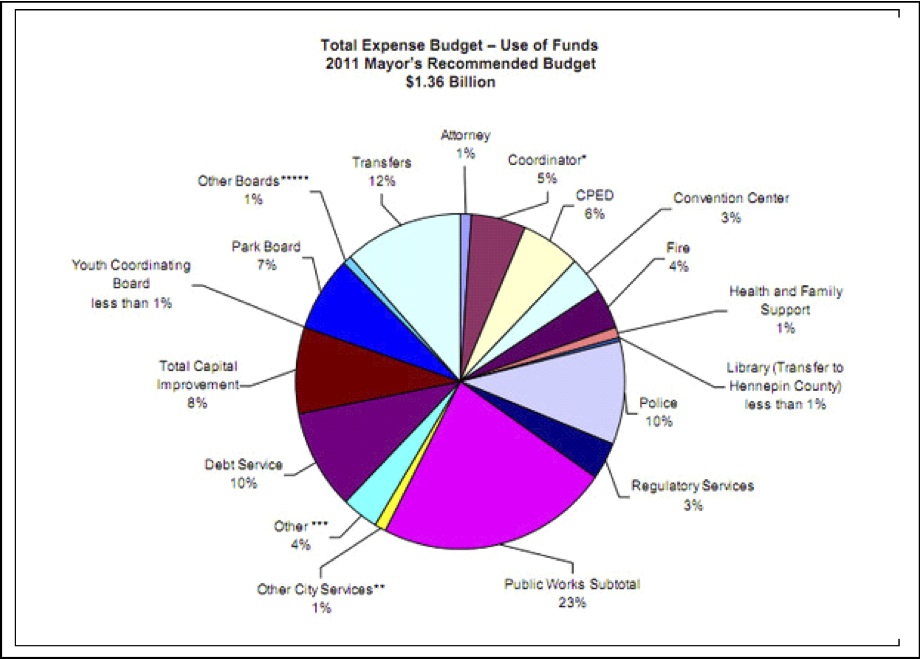 Minneapolis, uses of funds. Reveals that public works and safety comprise a major portion of the budget. Investment in capital improvements (roads, bridges, sewers, etc.) is now at 8-percent and shrinking.

Emotions have run high, both among property owners who have protested hikes to their tax rates, and those whose neighborhood-based organizations face cutbacks in funding. In Minneapolis, the freezing of Neighborhood Revitalization Program (NRP) funds, a consequence of the reduced hike in property taxes, has stirred particular anxiety. Some neighborhoods and neighborhood-based organizations stand to lose tens, if not hundreds of thousands of dollars, funds that had been allocated, but not yet designated for specific projects. 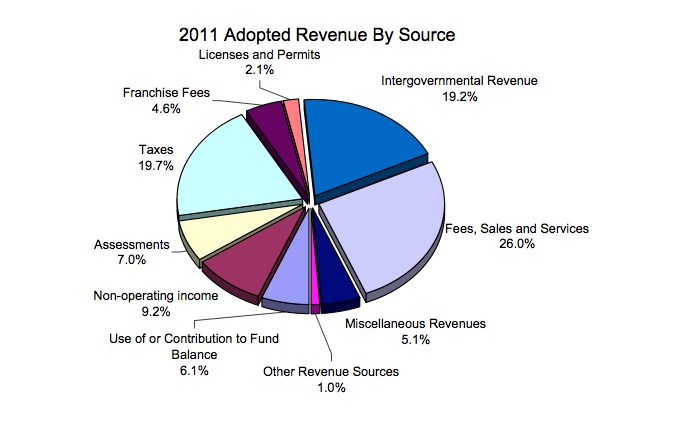 The City of St. Paul is confronting similar challenges, but adjustments there have not provoked the same level of controversy. One reason: in December the City Council passed a budget that included no increase in the property tax levy, the first time that had happened since Mayor Chris Coleman took office in 2006. Another reason for the relative calm, at least for now, is that the District Council system, St. Paul’s counterpart to NRP in many ways, remains intact. Kris Nelson of the Center for Urban and Regional Affairs at the University of Minnesota’s Humphrey Institute, has observed that the District Council system has lent more stability to St. Paul’s neighborhoods because it is hardlined into the city’s annual budget. Even so, increases in levies for the St. Paul Public Schools and Ramsey County mean that more than half of the city’s residents could see their tax bills rise in 2011. Furthermore, the city may not receive the $62.5 million in local government aid from the state that its budget is based on. 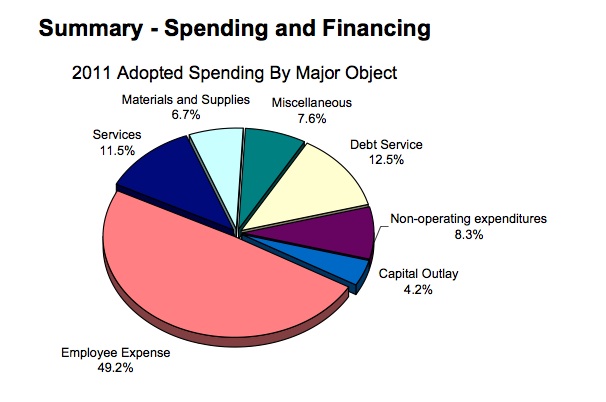 St. Paul, uses of funds. Public safety, through investment in police and fire protection, comprises the largest component of spending.

Now, the City of St. Paul-like Minneapolis-waits to see what the Legislature will do to solve a $5 billion budget deficit at the state level, an improvement over the $6.2 billion hole previously reported. Mayor Chris Coleman, in an interview for the Star Tribune described the tricky balance that he and other public officials face: “As we head into the new year, we are eager to work with Gov. Dayton and the Legislature on a budget solution for the state that allows local governments the resources necessary to do what we’ve done in St. Paul — to craft a budget that invests in public safety and other critical services without increasing the burden on property tax payers.”

Keeping property taxes in check, doing more with less, maintaining a focus on public safety, and responding to cuts coming from other levels of government, appear to be fundamental ingredients of the “New Normal” that cities must face these days.