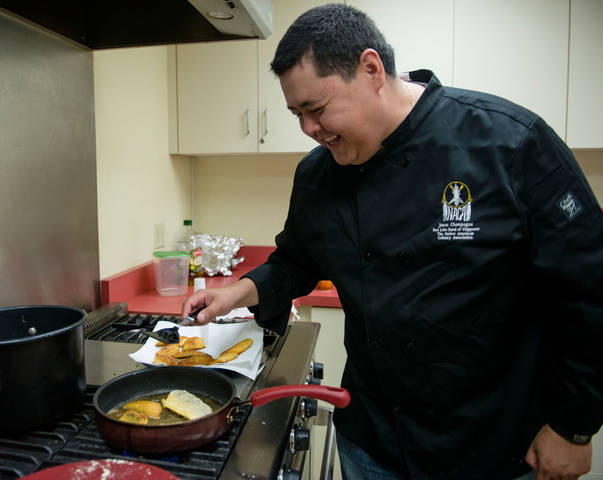 Chef and instructor for the School of Public Health Jason Champagne prepares Red Lake walleye for friends at the Department of Indian Work on Monday, July 15, 2013, at the St. Paul Area Council of Churches in St. Paul. (Photo by Emily Dunker)

Although Jason Champagne didn’t grow up on a Native American reservation, he visited relatives on them growing up and saw nutrition was a major issue.

Now, the 37-year-old University of Minnesota graduate student wants to change that.

Like many Native American students in Minnesota, Champagne relied on tribal-funded scholarships to help pay for his college degree.

The fall of 2009 marked the first year University students were awarded the Shakopee Mdewakanton Sioux Community Endowed Scholarship, which aims to increase Native American students at the University and is offered in part on students’ intent to serve native societies when they graduate.

Now, many University students, like Champagne, are graduating and plan on improving their communities.

After working as a chef for several years, Champagne decided to use his knowledge of traditional Native American dishes to improve the health of tribal communities.

As a result of increasing rates of diabetes, heart disease and other diet-related complications, he said, one of his biggest fears is that Native American communities will cease to exist.

“It is a huge concern,” Champagne said. “That’s what drives me when I wake up [in the morning].”

He’s finishing up his master’s degree in Public Health Nutrition, as well as establishing his own catering business.

Eventually, he plans to buy a food truck and travel to reservations and urban communities throughout the state to teach Native American youth how to cook nutritious meals.

“Now I’d like to take that investment [the SMSC] put into me and do some really great things for native people,” Champagne said, “because I don’t think that I could’ve done it without their assistance.”

Students with the SMSC scholarship come from 18 different states and 48 different tribal nations, said Jillian Rowan, associate to the director and senior of the University’s Circle of Indigenous Nations, which helps inform Native American students about scholarships.

Students attending any University campus are eligible for the scholarship, which pays up to $10,000 per academic year, depending on financial need.

Although the number of American Indian University students has increased since 2009, they made up fewer than 2 percent of the University’s total student population in spring 2013. The six-year graduation rate for undergraduate Native American students was 41 percent in 2011, compared to an average of 70 percent for all undergraduates.

Rowan said students are able to connect with each other through the Circle of Indigenous Nations center, as well as through the scholarships they receive.

“Students are searching for a connection to other native students,” she said. “And that’s a big goal of our office: to connect students.”

Bringing the native voice to Washington

Tiger Brown Bull, a University of Minnesota Duluth graduate, grew up on the Pine Ridge Indian Reservation, located in South Dakota in some of the poorest counties in the country.

He relied on scholarships, including the SMSC scholarship, to make it through college and graduate school.

Although his family made education a priority, many people in the community told Brown Bull that college wasn’t an option and he should accept living on the reservation for the rest of his life.

“I just didn’t want to be another statistic on Pine Ridge,” he said.

Brown Bull is one of the first students to receive a Master of Tribal Administration and Governance. Established in 2011, the degree was the first of its kind in the nation.

“I wouldn’t have my master’s without the [SMSC] scholarship,” he said.

After finishing law school at Michigan State University, where he will begin this fall with a full-ride scholarship, Brown Bull hopes to work in Washington, D.C., lobbying for or representing tribes. This summer, he’s interning with the House Subcommittee on Indian and Alaska Native Affairs.

Because the native voice in Washington, D.C. is very limited, he said, he wants to bring his own unique experience and knowledge to the table as a future lobbyist or politician.

“It’s been a trying journey for myself,” Brown Bull said. “I know I have a long way to go.”