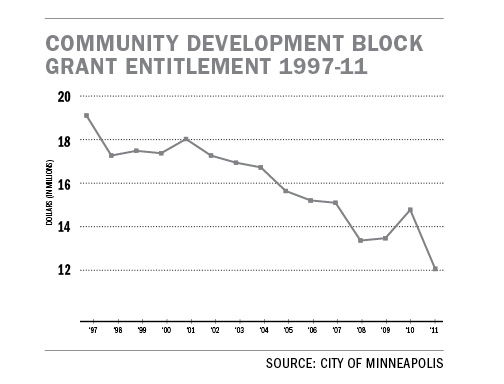 Nick Juarez wondered for more than a month whether he was going to start the new year unemployed.

After three years working as a crime prevention specialist for the Minneapolis Police Department, Juarez received his 60-day layoff notice in early November. But last week, he got some good news.

Thanks to $2 million in unexpected funds, his position and a handful of others had likely been saved.

The City Council’s Ways and Means Budget Committee decided Dec. 7 to use the money to bolster other strained city departments like the Internal Audit Department and the Department of Community Planning and Economic Development, and allow the city to continue financial support to programs like the Domestic Abuse Project.

The extra money came from retirements and cuts to overtime pay in MPD, and a larger grant from the federal government than the city had expected.

After more than four months of discussion, the city’s budget will be finalized Wednesday. Several City Council members and Mayor R.T. Rybak said the changes will likely hold, but Juarez was careful about his optimism.

“Things are looking good, but a lot can change between now and [Wednesday’s] meeting,” Juarez said. “Just cross your fingers, and hope for the best.”

For the first time in nearly a decade, Mayor Rybak’s budget for 2012 didn’t include a property tax increase.  Instead, almost every city department’s budget was cut, resulting in the elimination of roughly 100 city positions.

For many city officials the extra funds came as a pleasant surprise. Approximately $1.6 million came from the Minneapolis Police Department, through a combination of cuts to overtime pay and an increase in retirements. On top of that, the city received $400,000 more than expected from the federal Community Development Block Grant.

“It’s very unfortunate when an employee gets a layoff notice and then is called back,” Rybak said. “The only thing worse is if that person wouldn’t have been called back at all.”

The Domestic Abuse Project also got a welcome surprise with the budget committee’s adjustments.

Based on Rybak’s budget recommendations, DAP was set to receive no city funding, the program’s executive director Carol Arthur said.

DAP will receive $60,000 from the Community Development Block Grant to be spent on advocate training and helping aid victims’ immediate needs — from feeding abuse victims to finding them a safe place to stay.

MPD will transfer $317,000 of its unused funds to the City Attorney for the Domestic Assault Prosecution Partnership, which DAP partners with on prosecution in domestic abuse cases.

Last year, DAP worked with 4,300 men, women and children, and Arthur said she is hopeful that that will increase next year. The program started in 1979.

For each case of domestic abuse that it prevents, Arthur said DAP saves the city at least $3,000.

The program works closely with the Aurora Center and the University of Minnesota Police Department in training advocates and officers on how to deal with domestic abuse situations.

Arthur said she’s optimistic that the new money funneled to her program will go through Wednesday.

“There’s such great need,” she said. 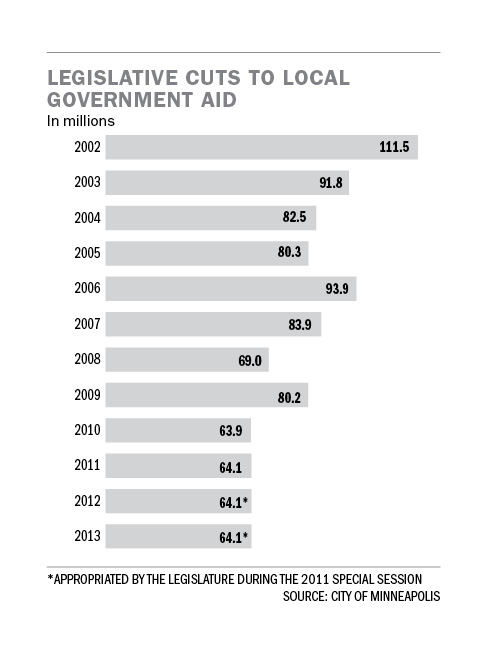 Less than half the cut back

The Internal Audit Department was created in 2009 to watch over the city’s finances, evaluate departments for risks of fraud and maximize efficiency.

This year, its budget was set to be cut in half to generate $130,000 in savings — one of the three auditor positions would have been eliminated.

The department will now get back about $60,000 of that projected cut. Internal auditor Magdy Mossaad said that money likely isn’t enough to fill the third position.

“It’s not as good as we wanted, but it’s still good news,” he said.

The city’s Department of Community Planning and Economic Development —focused on creating jobs, affordable housing and transit development — faced another round of cuts in this year’s budget.

Despite that funding increase, CPED plans to cut 12 people next year, bringing its staff down to 116 — nearly half of its level in 2003.

Four percent, or $3.6 million, of CPED’s budget will come from the city’s General Fund. That’s down 19 percent from last year, and Christenson expects that decline to continue.

CPED spends months planning before their budget is decided upon each year, but things can change quickly, Christenson said. He wasn’t sure whether the markups would go through. Even if they do, his department is still facing an uncertain future, much like the rest of the city.

With the latest city budget news, Juarez’s position appears to be safe — at least for another year.

In fact, the city is looking to use the new money to fill another crime prevention specialist position in Juarez’s second precinct, which includes Southeast Como and Marcy-Holmes.

Since the summer, Juarez has been the specialist for all 19 neighborhoods in the precinct. In the past, it had been split between two people.

The latest budget plans will fill the other position, allowing Juarez to focus more of his efforts on the University of Minnesota area.

But Juarez still doesn’t feel his job is safe.

“With city budgets now-a-days, it kind of goes year-to-year,” Juarez said. “Is this going to happen again fall of 2012?”

Juarez said his employment status is something that will constantly be at the “back of your mind.” He pointed to shrinking Local Government Aid  as a factor.

Local Government Aid, which the state provides to municipal governments, has steadily diminished over the years, forcing city officials to find funds elsewhere.

Councilman Gary Schiff said that planning the budget will always be unpredictable because so many factors are uncertain.

“It wasn’t new money that we discovered hiding under a rock,” Schiff said of the funds allocated last week. “Managing overtime and projecting retirements is always going to be a volatile element of city budgeting.”

City officials said that passing a budget this year has been easier than in the past.

“Usually at this time in the budget, there are some issues where we have a disagreement. But at this stage, there certainly aren’t any major disagreements,” said Rybak. “At this point there doesn’t seem to be any minor ones either.”

The City Council will meet Wednesday night to discuss the budget one last time before officially adopting it.