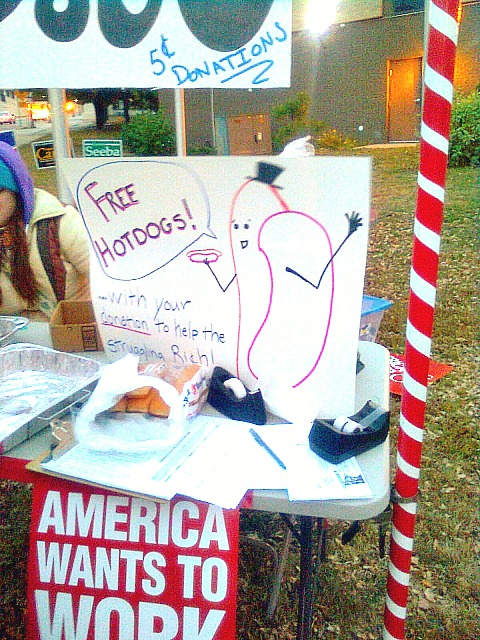 Minnesota Wants to Work (MNWW) held a tailgating hot dog giveaway before the Minnesota Wild game in downtown St. Paul October 15, saying that the event was held in the hopes of raising money to help struggling rich people who are unwilling to pay their fair share. The event was the culminating action in a week of action coordinated across the nation.

According to their website, MNWW is a campaign to organize workers who are unemployed, underemployed or experiencing unstable or temporary employment to call for good jobs, employment opportunity and economic justice throughout Minnesota. The week of Take Action events varied from rallies, protests, and roundtable discussions with various union and MNWW members calling for the passage of the American jobs act.

American Federation of Labor and Congress of Industrial Organizations (AFL-CIO) member, Bree Halverson, said that the tailgate was a fun way to end the week of action, but that the reality still stands with the need for jobs in America, and especially in Minnesota.

“People have been unemployed for awhile,” Halverson said. “We need to get people back to work.”

Workers set up a stand with signs for the event, along with posters for the organization, America Wants to Work. MNWW gave away hot dogs to all visitors with a five-cent donation while AFL-CIO worker, Kelsey Eide, spoke about the difficulties the 1% face during these times, “Some rich people can’t even afford a third house,” Eide said over the amplified microphone.

“It’s just a tongue-in-cheek way to show the ridiculousness of claiming that the wealthiest 1% is struggling in any way or any definition of the word,” Brandau said.

Communication Workers of America staff representative, Laurence Sandoval, had been at other events that day in an attempt to get the message out against corporate greed in America.

“This last week has been pretty dynamic,” Sandoval said. “We’ve seen folks from all backgrounds coming together trying to address what’s happening in America.”