I couldn’t get to the 5 a.m. news opportunity on Saturday, so I have no video of the busloads of Minnesotans embarking from El Colegio in South Minneapolis to take part in the March for America on Sunday, March 21. The march for comprehensive immigration reform came on the same day that the House of Representatives voted on health care reform, and the day after anti-war protests in Minneapolis and in DC marked the anniversary of the U.S. invasion of Iraq.

Today’s new media made it virtually possible to be “there” at all of these events. Here’s an account of just a few ways that the news came in across my (computer) desk.

Before the March for America began, I heard via text message that three busloads of Minnesotans had gone to Washington – one from Centro Campesino, one sponsored by SEIU, and one by the Minnesota Immigrant Freedom Network. Before the march had even ended, Patrick Ness had posted a photo of the crowds on Facebook (above.). Almost as soon as the march ended, I saw a blog post from Leora Maccabee, with video of a Minnesotan speaking at the immigration reform rally. Rabbi Morris Allen (in YouTube video below) was one of the three clergy – Jewish, Christian and Muslim – who opened the event. 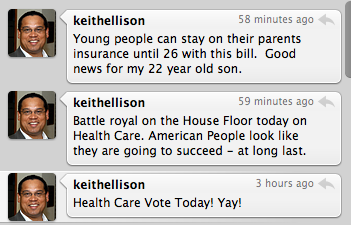 The health care vote was also easy to follow – with Twitter feeds from opponents and supporters collecting at #hcr, and with Minnesota Representative Keith Ellison’s enthusiasm at this historic vote coming through loud and clear on his Twitter account.

Even the august New York Times was live-blogging the vote on health care reform.

People have been marching on Washington for well over a century now, but the immediacy of coverage and the variety of sources from which we can get information makes it easier today to follow the history-making on Capitol Hill – and to participate in it as well.