New Assistant Superintendent for Planning, Bruce Chamberlain at right, assists CAC chair George Puzak. Below, one of the charrette drawings shows how it’s helpful to think of the park in terms of zones where certain themes prevail, like “quiet” or “learning.” (Photos by Margo Ashmore)

Getting beaned by an errant golf ball while walking or biking in the park can hurt your head…so can thinking about fair solutions to having those functions and others close to each other. That’s what members of the Theodore Wirth Regional Park Citizens Advisory Committee (CAC) and park board planners have been doing for two months going on two years.

A recent charrette process was an attempt to look globally at what had become a showdown between golfers and the City of Lakes Nordic Ski Foundation. Nordic Ski has been growing its year-round programming at the park—cross country skiing in winter, mountain biking in summer.

The CAC started its work with a promise from those who appointed them, that it would be brief, according to one member. Now, with different planners and processes in place and with several opportunities for public input, those involved in the charrette came up with seven key findings (see box). By the time everything is resolved, the CAC’s service will have approached two years, but there will be a plan for making the entire park work better for more uses.

Park planning chief Bruce Chamberlain said he expects the staff to have refined their recommendations and be ready to present again to the CAC in February. The CAC will pass its recommendations to the Minneapolis Park & Recreation Board, which can accept or modify them.

The CAC met Nov. 8 and Nov. 15, working through all but “finding Number 7.” Rather than meet again to hash that out, Chamberlain suggested that his staff could present alternatives in February that might become clearer after the recommendations tied to findings 1-6 had been dealt with.

This is similar to how the CAC was able to decide regarding options for a new “welcome center.” Currently, the Chalet hosts some winter recreation functions but quickly fills to capacity. Other functions take place at the Par 3 clubhouse, “confusing” to the public. It’s generally accepted that a new building should be added that can handle everything, repurpose historic buildings and take down the current Par 3 clubhouse. Given three alternatives, the CAC voted to pursue the “Outcrop” model in which visitors in the welcome center could look out over the “stadium” (the stadium, in this context, is not another building, but a flat area where ski or trail events would start and end).

The Outcrop integrates the building into the landscape, perpendicular to the road with its smallest side facing the road. Par 3’s Hole #1 is relocated, as well as golf holes 17 and 18, with a potential driving range in the former 17th fairway. Parking is located across the parkway near the 19th hole. The tool shed is restored, possibly as a base for tubing. Maintenance is relocated uphill from the existing tool shed.

At the Nov. 15 meeting, two groups of advocates passed out position papers. They are the Minneapolis Off-Road Cycling Advocates, and the Friends of Theodore Wirth Par 3. Looking at their responses to what’s being proposed helps to explain some of the proposals as well as the underlying friction and how it may be coming to resolution.

In the Par 3 paper, the Friends said they consulted with representative 18-hole golfers and would agree to giving over the 17th and 18th holes to new uses provided that a committee of golfers in involved in the course redesign to place the holes elsewhere, and that a driving range and improved teaching facilities for First Tee and other youth programs be placed in the old 17th hole area. (The CAC’s directives also call for improving the playability of hole 12 in this redesign, and possibly reversing direction of play on some holes.) Chamberlain said planners forecast that a small 12-stall driving range would be possible. Other driving ranges in the park system have 22 to 40 stalls, they’re considered complementary to other golf activities so even a small range would be seen as positive. 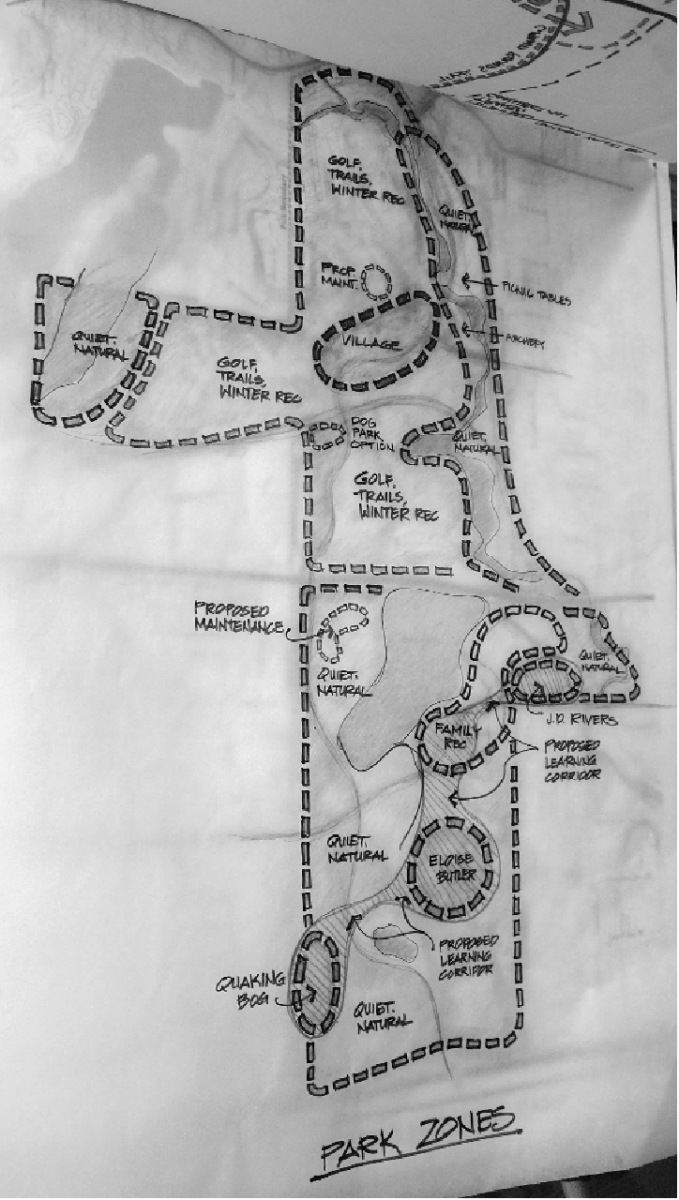 The Par 3 Friends said they would be willing to share the driving range and teaching facility areas during the summer “and close down for scheduled non-golf events and activities, as long as an impartial MPRB Wirth Park management staff is responsible for balancing the schedule between revenue, non-revenue, and teaching activities.” They would also like MPRB staff to run the new welcome center, and flat-out stated that “no user group be tasked to run the center since recent history unfortunately shows that serious feelings exist between members of these groups.” They also asked for an ongoing joint committee to address future problems, under “the even handed chairmanship of the MPRB Wirth Park management staff.”

John Munger, Executive Director of City of Lakes Nordic Ski Foundation, told NorthNews he thinks the meetings have been going very well, plans are workable, “all things we can not only live with but be really excited about.” He said he likes the Outcrop model, but challenges the idea of a driving range in the middle of an area that would otherwise be a “silent sports center” (trail-based endurance sports like running and mountain biking). He also said he believes an entrepreneurial model would be better for managing the welcome center, rather than government staff.

The Par 3 Friends had specific ideas for the Par 3 course, favoring the Outcrop version and preserving the “loop back” to the clubhouse every few holes (a design that appeals to youth, older and handicapped golfers) and commented on new golf populations coming up.

The Minneapolis Off Road Cycling Advocates also conditionally favored the Outcrop model and with the Par 3 group, opposed two golf design proposals that replace prairie area in the “Back 40” with golf holes and destroy single track trails.

They also discouraged any connection between recreational single track trails and event loops (event loops are wider to accommodate passing). MOCA wants to see event trails exist “on the perimeter of the existing golf course—where the required equipment to build and maintain these trails will not disrupt the careful design and environmental considerations of the recreational trail system.”

They point out that racing events can be very hard on the trails because they have to be conducted even when the course is wet (that’s part of the challenge). There are sustainable design standards established by the US Forest Service and adopted by the International Mountain Biking Association; MOCA urged the CAC to recommend that these be followed (the CAC agreed).

MOCA has provided lots of volunteer labor, tools and materials to design and maintain the current bike trail system with park staff, “closed off and re-vegetated sections of existing trail that were prone to erosion, are environmentally sensitive, or were identified as unsustainable tracts.” And, they point out, “anyone can use these public trails for free—there is no permit or other payment required.”

City of Lakes Nordic Ski Foundation has put about $300,000 and more than 1,000 volunteer hours annually into the park, which has 22 miles of cross-country ski trails, Munger said.

Selected additional directives from the CAC to park board staff, not already mentioned above, within the seven charrette findings, include: