“How many people will be at this happy hour?” I asked Shana. It was my first week of work at the Minneapolis Jewish Federation, and in between turning down food every ten minutes (working at Federation is like working with 30 Jewish mothers) I was invited to attend a Jewish happy hour by Shana, the coordinator of Young Leadership.

My mouth dropped. Forty young people willing to self-identify as Jews on a random Thursday night? Where I come from, I’m too busy explaining what Jewish is to drop everything and spend time with the handful of Jewish young adults in the area – the ones who haven’t decided life is easier by giving up and slapping a Jesus fish bumper sticker on their car. 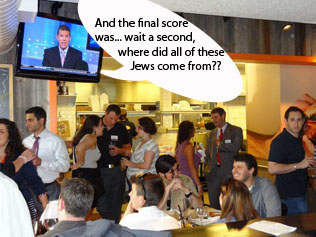 I had heard some vicious rumors about Jews in Minneapolis, namely that it was impossible to break into their circle. They grew up together, bonded by participating in one of the many options for Jewish life in this area; they moved away for college; they came back and reunited with their childhood friends. The thought of walking into a bar full of 40 people who presumably already knew each other filled me with terror.

I imagined a horrific scene from a teen movie; at one table would be the football players (err…doctors and lawyers) and cheerleaders (song leaders and former NFTY spirit chairs); at another table would sit the popular girls (which, if this were anything like my summer camp, would be the lucky few without frizzy hair); the class clowns would occupy a corner table wishing they had a chance with the girls present but knowing that life is not a Judd Apatow movie.

When I walked into Loring Kitchen and Bar I was half correct. The crowd had divided itself into groups, but no one seemed standoffish. Just comfortable. No one minded when I popped up in their circle and introduced myself, and I talked about everything from sports to food to travel to Minnesota drivers (WHY WON’T THEY LET ME CHANGE LANES?!).

As I was taking a second to fuel up with a drink and complimentary sweet potato fries and quesadillas, I realized that this could be the first time I had ever been in the presence of so many Jews with no obligation to actually discuss our Judaism. No gentle prodding to carry the Torah next Shabbat. No customary sniffing of the special scent of a spice box (even though anyone who has made apple pie knows that it’s just allspice). We knew we had these things in common, but no one needed to say anything. We were just a group of people having a good time at happy hour – and we all happened to be Jewish. 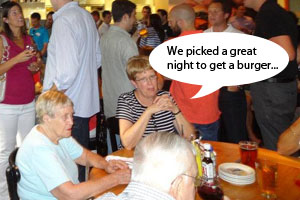 I left with several new Facebook friends, which everyone knows is the true test of successful socialization. I don’t think it was my charming Southern accent – everyone tells me I don’t have an accent, let alone a charming one – so it must be that young Minneapolis Jews have a PR problem and, in fact, are willing to welcome newcomers.

About a month later, I walked into Burger Jones for the next Young Leadership Happy Hour. I hadn’t bothered to ask Shana how many people she was expecting this time – like I mentioned, eight would have impressed me. But I did not expect the crowd to double in size from the month before. Nearly 80 young Jewish adults swarmed the restaurant (which, thankfully, was able to make its famous maple bacon sweet potato fries sans bacon). 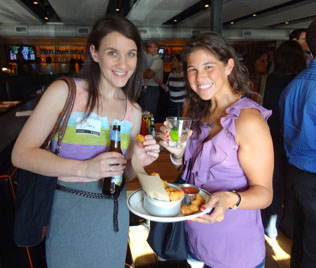 Right: Me, with another New Jew in Town

After saying hello to a few friendly faces from the previous happy hour, I – normally a little shy and a lot awkward– took a deep breath and walked up to a girl I saw standing by herself. It turns out, we’re both new in town. Suddenly, I was introducing a new person to the friends I had made at the last happy hour.

From friendless to frenta (which is a word I just made up that obviously means friend yenta) in just a month? This place is definitely not living up to its scary reputation.

Young leadership’s next event is this Thursday – if you are going to see Matisyahu at First Ave, come to the Depot Tavern anytime after 5 p.m. for a happy hour before the concert!