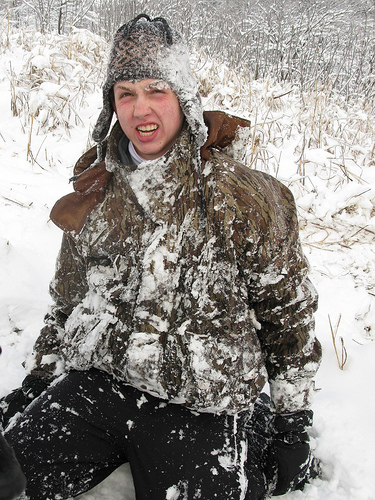 It’s officially gotten colder than it ever gets in Louisiana.

I’m becoming a little nervous, mainly about clothing. What is a base layer? Do I need one? Every day? Why is Target selling boots that look like giant marshmallows? Can I live without a jacket that generates its own heat?

Don’t get me wrong, I knew what I was getting myself into when I moved here. People in Louisiana made sure to tell me how crazy I was for moving out of the humid, swampy climate I’d called home for most of my life. In fact, I got so annoyed at people reminding me how cold it would be that I passive-aggressively made a video about it, around the time of those “Stuff Girls Say” videos. I called it, “Stuff People Say to People Moving to Minneapolis.”

I heard each of these things at least twice, usually accompanied by a horrible look of disgust. People were incredibly concerned that I was moving to a colder climate, as if I had secret plans to hold them hostage in my luggage and drop them off naked in an igloo somewhere.

So far, I’m surviving. Although, I have learned that being late for work due to texting IT’S SNOWING!!!! to every single person you know is frowned upon.

I feel lucky to have a warm coat and a heater while so many on the East Coast lost everything after Hurricane Sandy. As a Louisianan, I will always feel a solidarity with hurricane victims, and as a Jew I will always have a soft spot for anyone in need of tzedakah. That’s why I feel proud to work for an organization like the Minneapolis Jewish Federation, which has established an Emergency Relief Fund, joining a national effort to provide immediate, nonsectarian aid where it is needed most. Just because Minnesota is in the middle of the country doesn’t mean that we avoided the pain of Hurricane Sandy. Even if we personally don’t know someone affected by the storm, as Jews we all try to engage in tikkun olam, repairing the world. With your support, our Jewish community can offer some comfort to those who are struggling. Click here to donate – all proceeds will be distributed to those in need through the Jewish Federations of North America.