Last week when I read a few articles in the Strib about a new city ordinance codifying feral cat colonies, my gut reaction was based on the last several encounters I and other neighbors have had with the crazy cat ladies. They were not pleasant. The photo above is from 2909 3rd Street North, a home I had actually looked into purchasing (quite literally, as it was continually open to trespass) prior to buying my house at 26th and Penn. The 3rd Street property had been taken over by feral cats, and later (or which came first, the feral cats or the crazy cat ladies? That is our existential question of the day.) by presumably well-intentioned people who put out both dry cat food and tins of Fancy Feast. I made repeated calls to 311. The house was broken open numerous times, and the cat food was replaced.

The interior of this property was, at one time, full of dozens of cats, most of them alive. Feces and urine made the floor a minefield of sorts. The stench was overwhelming, and the only thing that’s harder than crazy cat ladies to remove from a property is the smell of cat urine. These supposedly goodhearted people will not acknowledge that they are damaging a home, and will not leave even when owners and neighbors confront them. And the odiferous after-effects of their presence lingers on well after they leave.

Complicating matters further is Minneapolis’ trespassing ordinance, which in essence states that the only way someone can be cited for trespassing at a vacant property is if there is a “No Trespassing” sign posted AND written notice from the owner to the city to that effect. (This statement based on a reliable source, and may be subject to correction as needed.) It is, in essence, almost impossible to keep a crazy cat lady away from a boarded and vacant property that is in some stage of foreclosure/tax forfeiture limbo.

So the first thing I looked for in the city’s newly-proposed ordinance is whether it would be a carte blanche to anyone with a soft spot for kitties and a willingness to inflict that soft spot on others. It turns out that in order to establish a feral cat colony, one needs written permission from the property owner.

In order to be a feral cat colony caretaker, said caretakers shall reasonably complete the following…Obtain written approval of the owner of any property, or any authorized representative of the owner, to which the caretaker requires access to provide colony care. 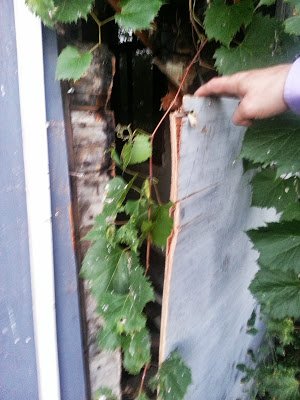 There’s also a nice bit in the ordinance about how food shall not be provided for more than three hours per day.

So the beginnings of property owner protection are there. And if crazy cat ladies want to establish cat colonies at their own properties in conformity with the new rules, more power to ’em. But what happens if they show up at one of the vacant homes around the corner from me, claiming that they are even more immune from trespassing rules? The language, as it’s proposed, is unclear. Likely, they would lose the ability to operate feral cat colonies for a period of time. But they didn’t have that legal protection before, so the threat of losing it would be essentially meaningless.

In order for this ordinance to do all that it ought to do, the city needs to be willing to step up enforcement when the crazy cat club comes around uninvited.