On the heels of a severe drought across the Midwest; summer storms that caused record power outages in the Twin Cities; the third largest wildfire in California history and devastating, record-breaking floods in Colorado, the Obama administration proposed a major new rule last week to curb carbon pollution spewing from power plants. Scientists warn that without major reductions in carbon pollution, climate change will cause extreme weather to become even more frequent and severe. 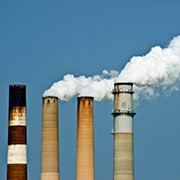 If we want a safer climate and future for our kids, we cannot keep letting dirty power plants pollute. Fortunately, President Obama has put his foot down in the fight against global warming and effectively said: ‘No new dirty power plants.’

The proposed rule represents the first major benchmark in the implementation of President Obama’s climate plan unveiled in June. The President’s action enjoys broad support – Americans submitted more than 3.2 million comments in support of carbon limits on power plants in the last 18 months, including nearly 50,000 from Minnesota. Hundreds of elected officials, business leaders, and public health organizations have joined the call for limiting carbon pollution from the power sector.

A recent report from the Environment Minnesota Research & Policy Center found that a large portion of America’s carbon pollution comes from a small number of the dirtiest plants. For example, if the nation’s 50 most carbon-polluting power plants were a sovereign nation, they would emit more carbon than all but 6 other nations on Earth. Minnesota’s biggest carbon polluter – Xcel Energy’s Sherburne County or “Sherco” plant – emits as much global warming pollution as 2.7 million passenger vehicles.

This new rule is a kiss goodbye to any more power plants like Sherco – the dirtiest of Minnesota’s power plants – that wreak havoc on our weather patterns and threaten our children’s future. This new rule will mean more renewable energy, more energy efficiency, and less global warming pollution.

The Obama administration is expected to propose a rule to limit carbon from existing power plants by June 2014, and to finalize that rule the following year.