Some Greater Minnesota workers have adopted one such strategy, the worker center.

A statement from Representative Ryan Winkler’s office pointed out:

This kind of innovative approach to worker relations was recommended in a recent report by the Select Committee on Living Wage Jobs, chaired by Rep. Ryan Winkler (DFL – Golden Valley). The report mentions the Greater Minnesota Worker Center in St. Cloud that was able to come together and push for improved working conditions outside of traditional labor relationships (on page 14 of the report found here.) It was support by the Star Tribune editorial board, which argued that the report “offers several dashes of postrecession reality that challenge conventional campaign rhetoric from both the left and the right.”

The report, embedded below, notes:

Temporary and contingent workers in Minnesota and around the country are pursuing innovative organizing techniques to achieve greater employment security. In one example, the Greater Minnesota Worker Center in St. Cloud approached the Jenny-O Turkey Company and asked them to go to direct hiring. After some reﬂection, the company agreed. Reported Philion:

The impact on workers and the company has been real and dramatic. Workers are less likely to be ﬁred. When a problem happens on the line, it is dealt with directly by the manager, who previously would have sent it to the temp agency who would often ﬁre the worker rather than deal with it. More motivated workers and a better communication system between management and workers at Jenny-O has proven better for the employer as well as workers. 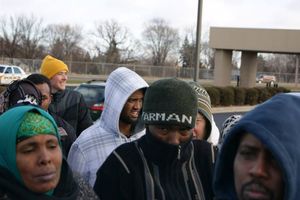 Community-based worker centers like the one in St. Cloud appear to be the most effective intervention into the temporary worker market according to Abel, Teodore and Meléndez (2006). Worker centers help workers monitor the actions of employers, increase transparency in hiring, and provide a foundation for holding employers responsible for workplace abuses. The St. Cloud center does what social service agencies do not: trains people in workers’ rights, helps immigrant workers ﬁll out job application forms, bargains with employers to bring up wage standards and working conditions. For employers, they help normalize the hiring of day laborers, monitor workers quality, and provide opportunities for incorporation into the mainstream economy through employment assistance and, in some cases, skills training. The Center aspires to keep educated immigrant young people in the St. Cloud labor market and helping their communities rather than leaving for Minneapolis or Chicago. However, in 2013, a new industry group, the Center for Union Facts, based in Washington, DC, began lobbying Congress to investigate whether worker centers should be subject to regulation and unveiled a new website that calls on employees to report worker centers for harassment (Krisberg, 2013).

The anti-labor Center of Union Facts is operated by industry flack Richard Berman.