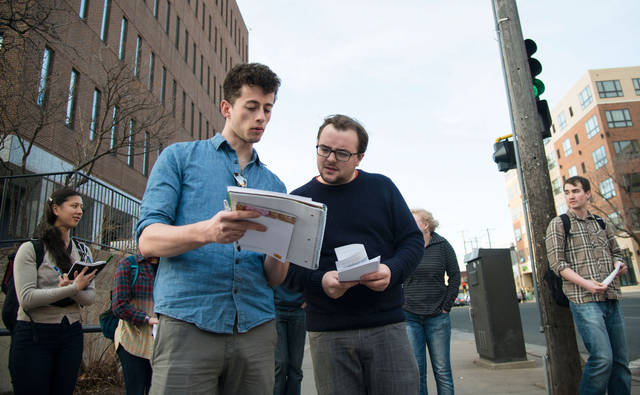 From improving existing bike lanes to giving city officials suggestions on upcoming projects, a new advocacy group at the University of Minnesota is working to address cyclists’ concerns.

The group is a collaboration between members of the Minneapolis Bicycle Coalition and the Minneapolis Public Interest Research Group. It aims to formulate plans for improving campus-area infrastructure and raise people’s awareness of bicyclists’ issues.

“Our goal is to have bike infrastructure that works for students and connects them to the rest of the city,” said Daniel Lubben, an urban studies junior and co-leader of the group.

He said the group is focusing on several bike projects that city officials are pushing forward in the coming years, including the Oak Street Southeast Bikeway — a city-funded project that will begin construction this year. The project will create a bike path along the west side of the street. According to a city report, the road carries more than 1,100 bicyclists a day.

The group met earlier this month to discuss the new bikeway and examine its potential problems.

“It is important to get the earliest generations of bike lanes correct,” said Steve Sanders, the University’s alternative transportation manager.

Sanders suggested the group discuss challenges the new bike lane could pose at the busy intersection of Washington Avenue and Oak Street.

Lubben said members of the bike coalition asked him and Bailey Shatz-Akin, an environmental science policy and management junior, to lead the bike advocacy group.

Shatz-Akin said the group will also focus on proposing updates to the Minneapolis Bicycle Master Plan, a plan aimed at improving bicyclists’ safety and increasing the amount of them in the city.

She said the group will analyze the plan and offer suggestions to city officials.

About 30 students and bike advocates showed up for the group’s first meeting on March 12. Laura Kling, Minneapolis Bicycle Coalition’s community organizer, said the turnout represents the high amount of involvement people have in cyclists’ issues on campus.

Among those who attended the meeting was Rob DeHoff, owner of Varsity Bike and Transit in Dinkytown.

DeHoff said he hopes the group can expand on existing bike projects in the University’s area, like the 15th Avenue Southeast bike lane.

Chris Stanley, a neuroscience sophomore and member of the group, said the group’s goals will ultimately benefit everyone traveling in the campus area.

“We’re a community of people who want to improve the way our street systems work by making it friendly for both cars and bikes,” he said.