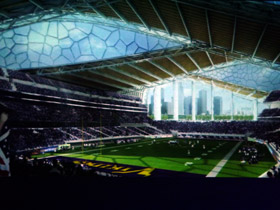 An artist rendering of what the inside of a new Vikings stadium could look like. HKS Inc. won the right to design the new stadium. HKS officials say they will farm out eight percent of the design work to minority-owned companies. (Photo credit: Harry Colbert, Jr.)

With the selection of the architectural firm for the new Vikings stadium, one question still to be answered is how much work will be subcontracted to African American firms.

HKS Inc., the architectural design firm that designed Cowboy Stadium in Dallas, Lucas Oil Stadium (home of the Indianapolis Colts), the Olympic stadium in Brazil and architects of the new Vikings stadium promise the new stadium will have a uniquely hometown appeal. According to the design firm, in addition to keeping with the hometown tradition, eight percent of the design work will be farmed out to minority firms. It has not been made clear what portion of minority contracts will go to African American firms. In addition to the eight percent minority participation, HKS said it will commit to 11 percent of its total $34 million contract to women-owned firms.

Michele Kelm-Helgen, chair of the Minnesota Sports Facility Authority (MSFA), said the authority is committed to minority participation in every aspect of the new stadium.

“We have acquired the services of Wanda Kirkpatrick who has done the target business recruiting for Metropolitan Council and she and her staff are going to assist in identifying minority partners to work on the new stadium,” said Kelm-Helgen. “We also have a very specialized process to include minority and women workers.”

MSFA was established by the legislature in 2012 and charged with the design, construction and operation of the new multi-purpose stadium. Kelm-Helgen was appointed the chair by Gov. Mark Dayton.

Kelm-Helgen said the MSFA’s goal is to have a 32 percent minority and female workforce on the stadium project. She said MSFA is working with Summit Academy and other community organizations to identify and train minority workers. Kelm-Helgen said the Vikings looked at the constriction of Target Field, home of the Twins, and the construction of the central corridor as models for minority inclusion.

“Both had a very systematic way to go about the number of jobs and ways to recruit those with skills for specific jobs,” said Kelm-Helgen. “One of the reasons we chose HKS as architect for this project is they were proactive in how they would work with the public and listen to what the people want.”

MSFA, the Vikings and HKS recently held an open forum to get citizens input into the design of the new stadium. Many of the comments came from those with disabilities voicing concerns about greater access in all levels of the facility and better sightlines for those in wheelchairs.

Several ardent fans voiced their hopes for an open-air or retractable roof stadium. Mark Williams of HKS said his firm is looking into ways to create an open-air feel with the new stadium, which when all is said and done will come with a price tag of $975 million.