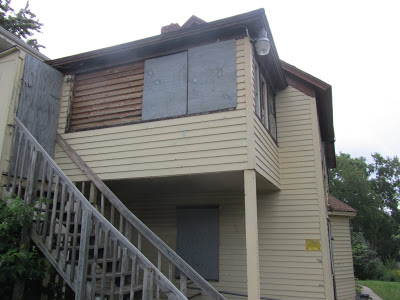 The previous post outlined the problem of tax-forfeited properties in north Minneapolis being scooped up by slumlords. A good discussion happened on the North Talk Facebook page that helped shape a few ideas for a solution. What follows is based on my current understanding of the issue, and may change as things develop.

But as it stands now, the first concern is that the resale of tax forfeitures is heavily skewed towards the expansion of problem properties in our community. The houses are sold as-is, they are not listed on the MLS (because apparently the County cannot or will not contract with a Realtor to list them), open houses are held, but attended almost exclusively by landlords, flippers, and fools. Out of those prospective buyers, bids are placed at the auction, and the financing mechanism of 10% down and ten yearly payments makes it too easy for bad actors to add to their inventory.

The City of Minneapolis and approved development partners do often pick up some homes, but the majority are left to the auction process. Changing that process seems daunting at first, because at least some of the disposition process is governed by state law. At this early stage, I am not clear whether those laws would need to be rewritten entirely, whether a non-legislative governing body could adjust them somehow, or whether the statutes could simply be reinterpreted in a different fashion. For the time being, I’m going to leave that potential solution alone and explore options that could be more nimbly implemented. After all, this is likely not an issue for the pricier tier of tax forfeitures in other parts of Minnesota.

So the first step would be to define either the area or the price point at which the new process could be applied. I’ll propose zip codes, as they’re easier to understand than neighborhood boundaries or census tracts. Based on statistics like foreclosures, boarded/vacant properties, or median income, we can define a few zip codes as “impacted areas.” In those impacted areas, every tax forfeiture would be sifted through multiple parties as a new owner and end use is sought.

The City of Minneapolis and approved private and non-profit developers would have a chance to add properties to their inventory, as they do now. But currently most tax forfeitures are passed up by these partners. Instead, most properties should wind up in the hands of trusted parties. That likely would mean designating one or more entities as an intermediary owner while an end use is found. The Twin Cities Community Land Bank could be one such partner, or the City or another developer could take on more properties.

Because I don’t want to inadvertently confuse people into thinking an organization has decided to take this on, or that I have a preference for who should do so, I’m going to refer to that partner as simply “the middle man.”

The middle man would then hold the bulk of the properties after development partners pass on them. The middle man could look for other approved private or non-profit buyers, or place the properties on the MLS as purchase/rehab candidates, or simply hold them for a while as a new use is determined. Some houses may need demolition, and others that are borderline could wind up in a landfill if no feasible use is found. Even then, the immediacy of feeling like we need to demolish a house to keep it out of the hands of a slumlord will be removed from the decision-making process.

Presumably, the middle man would not do much rehab work themselves; they would just hold the property while a new owner is sought. But they would be able to weed out the known bad landlords and simply not entertain their offers.

A plan with this framework would accomplish several things; it would allow Hennepin County to dispose of tax forfeitures in a way that complies with existing state law. Problem property owners would have a harder time acquiring new houses. We might see fewer demolitions, and we almost certainly would see a more level-headed process for how demolitions are determined. We would have more owner-occupants, more good renters, and with more rehab work, more local jobs.

This is just an early proposal. If there are ways these ideas could be improved upon, please share. We’ve got the attention of our elected officials and public servants, and change is in the air.