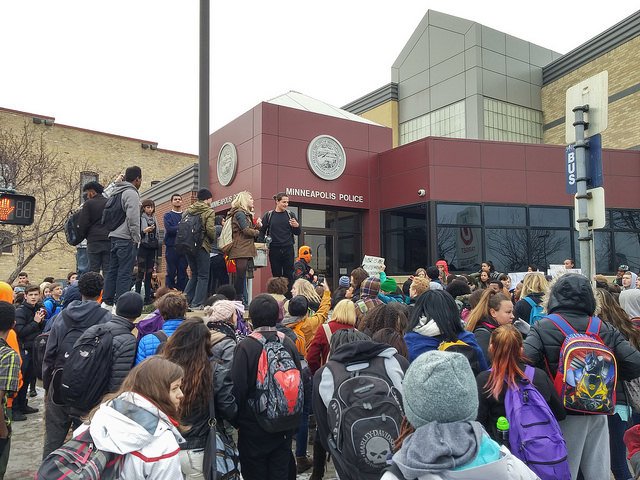 What can any one person do in the face of #Ferguson and grief over a child’s death and despair over a country’s continuing racism and failure? What can any white person say, in the face of so much white failure, white racism, white guilt?

“Never give up. No matter what is going on, never give up. Develop the heart … be compassionate, work for peace, in your heart and in the world. … Never give up.” These words from the Dalai Lama XIV, passed on by poet and elder Louis Alemayehu on this day after #Ferguson’s failure to indict a police officer, point a way to go forward.

The day after is a time to keep on learning and teaching. Too many people, especially white people, do not know our history and do not know basic facts about our present, especially about the continuing existence and effects of institutional racism.

For our history, read James Baldwin’s personal and political story, A Report from Occupied Territory, published in The Nation in 1966. Sadly, the stories of police abuse and brutality toward young black men in Harlem in his day are not only history and not only Harlem, but the present day reality across the United States.

For more about this present, review the stories of Henry Davis or Levar Jones or Henry Walsh or the FBI data showing that cops kill black people at a higher rate than white people. Or read Ta-Nehisi Coates on The Secret Lives of Inner-City Black Males and some of the hundreds of analyses of racial disparities and discrimination in hiring, in housing, in the criminal justice system.

Michael Brown’s story is all over the news, and yet it’s possible to miss essentials in the tsunami of explanation and accusation. Vox has a whole set of short articles explaining 11 things you should know about the Michael Brown shooting. If you are familiar with legal procedure and grand juries in particular, Mark Sumner poses important questions that the “professional reporters” missed in the brief Q&A with St. Louis County prosecutor Bob McCulloch. The Nation has a more basic explanation of how the criminal justice system works and why it’s impossible to indict a cop, as well as the “sick joke of self-regulation” by police internal investigations.

Today and tomorrow and the day after are the days to post these stories on your Facebook feeds and talk about them at your Thanksgiving tables. Back in August, Janee Woods wrote 12 things white people can do now because Ferguson. The basic message still holds: everybody, not just the activists, needs to speak up. When family members and friends and people who just don’t know any better continue to believe and repeat ignorant or racist tropes, it’s time to speak. Silence gives consent.

Way back in the day, African-American poet Langston Hughes wrote about patriotism, demanding that America become “the dream that dreamers dreamed.” In his words:

America never was America to me,

And yet I swear this oath —

We can and we must continue to march, speak, write, protest, argue and demand that America become

The land that never has been yet —

And yet must be — the land where every man is free.

At top: In the morning, South High School students held a sit in for four and half hours (the length of time Michael Brown’s body was on the street after he was killed). Then they walked out and marched to the Minneapolis police 3rd precinct. Police cars blocked traffic for the march. 2014-11-25 This photo and text is licensed under a Creative Commons Attribution License by Fibonacci Blue