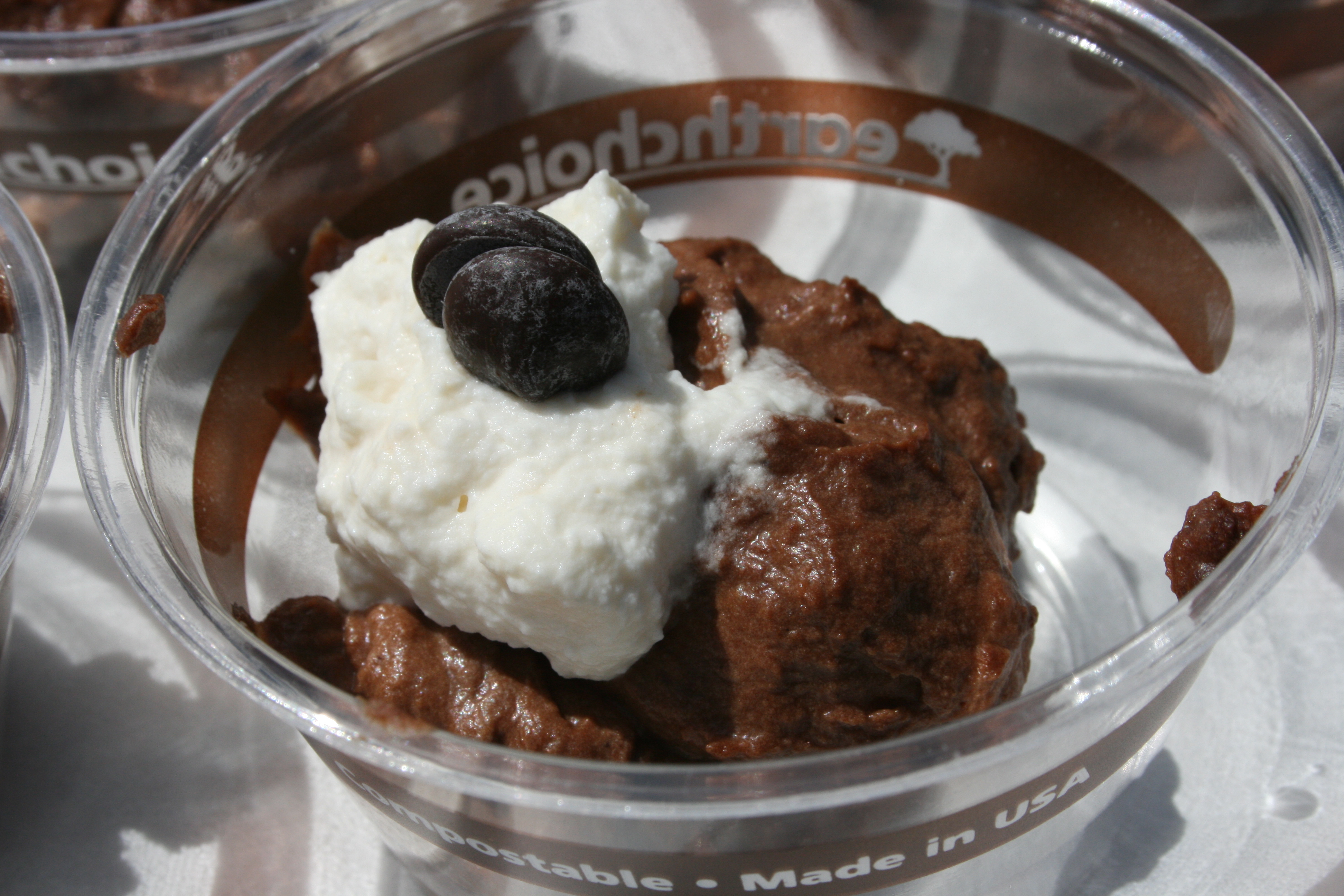 How long is too long to drive for “local” food? Gas is expensive, cars pollute, you already spend two pointless hours commuting every weekday, why can’t we have train travel like other civilized countries?, etc. Forget it. But Google Maps says it’s only 36 minutes from St. Paul to Nesbitt’s Nursery & Oasis Eatery, and in the grand scheme of things, is that really too far? Anyway, I went. 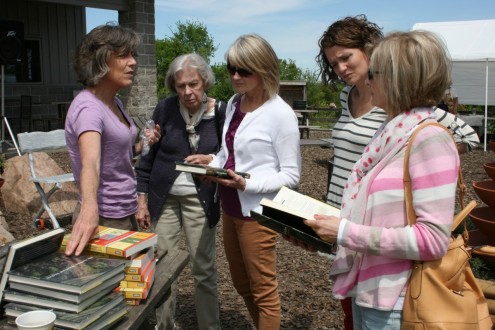 The occasion on Saturday at Nesbitt’s was a Mother’s Day local food event and book signing: Beth Dooley (above left), author of the new cookbook The Northern Heartland Kitchen, drove all that way to meet the not-very-many people who came to buy the book, listen to music by a remarkable local singer named Yata, eat delicious free snacks, and admire the local vendors displaying their wares. It was a spectacularly beautiful day. Nesbitt’s is in the middle of a huge expanse of farmland, up the hill from the river at Prescott, Wisconsin, and the drive on the Great River Road is nothing like the annoying commute on 94. I expect you’re sorry you didn’t go, now aren’t you?

Leah Nesbitt-Miller, one of the several Nesbitts who own and run the place, is tremendously enthusiastic — about everything, it seems, but especially about local foods; hence the signage: 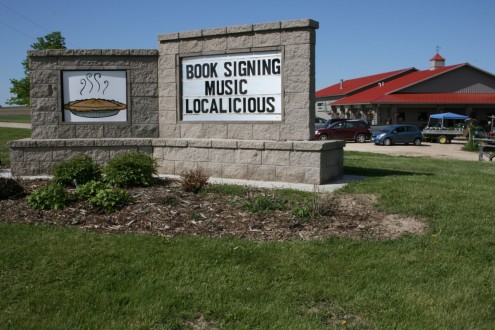 She’s been a foodie all her life, coming from a family with a clear strain of culinary talent (grandfather a chef, mother a talented and instructive cook) and entrepreneurialism. Her parents — and here I must tell you that Leah’s grandma’s name is Leone, her father is Leon, her mother is Donna Lee, her brother is Lee, and so on; just shout, “Hey, Lee” when you enter and several people will reply — bought the property in 1995. They weren’t sure exactly what they were going to do with it. 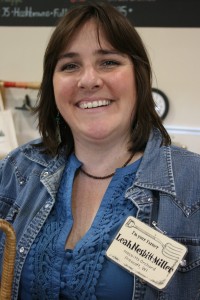 “When people asked my mom what she was planning to do out here, she’d go, ‘I’m pretty sure we’re going to be the local entertainment for a few years,’” Leah says. “The neighbors just watched them to see what would happen. They started developing the spruce tree farm, and it grew from there.” The Nesbitts went on to plant apple trees and make cider, and in 2004 they expanded the building that now houses a gift shop and the Oasis Eatery.

Leah had racked up some years in the food business, working at Barbette and The Local among other forward-thinking restaurants. When her family decided to open a coffee shop in what was now a successful nursery/orchard/garden center, Leah saw the chance to give full vent to her passion for local food-ism.

“It’s so funny that ‘local’ is trendy now, because we grew up eating local and seasonal foods, just as a matter of common sense,” says Leah. She finds it amusing that what used to be a sort of back-door operation is now a must for restaurants: buying seasonal items from local foragers. 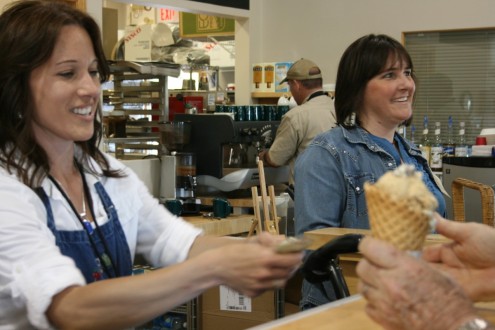 “Old guys used to show up at the back doors of restaurants with a box of ramps or morels,” says Leah. “I don’t know if it was totally legal, but that’s how we got some amazing stuff. Once a guy came by with a huge ‘chicken of the woods’ mushroom and I used it to make a pasta sauce for a vegetarian customer. She didn’t believe it wasn’t actual chicken so I had to show her the leftover mushroom to prove it.” This kind of locavore inventiveness is a point of pride.

Now Leah is a “local” evangelist. She and her family started a CSA — shares are sold out for this year, but let her know if you want to get on the list for next year — and her mission is to help people figure out how to use all the produce they’ve bought. She makes it a personal challenge as well.

“I’m addicted to this!” says Leah, although I’m not sure the word “addicted” should apply to something that’s 100% virtuous and healthful. “I no longer look at a cookbook and then go out and buy the ingredients. I look at what local foods I have in the fridge and then Google for ideas. It doesn’t take any kind of advanced knowledge to eat local stuff. Everybody can do it!”

Leah’s quest for ideas on how to use her CSA produce led her to invite Beth Dooley to Saturday’s event. The Northern Heartland Cookbook is full of simple, creative recipes using seasonal and/or local foods. (Stay tuned for an interview with the irrepressible Dooley in an upcoming post.) In honor of Beth’s presence, Leah made a couple things from the cookbook: 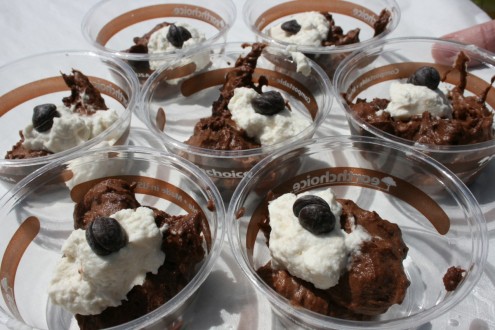 Chocolate mousse with maple cream: the only non-local thing was the chocolate, and that was Fair Trade, of course. 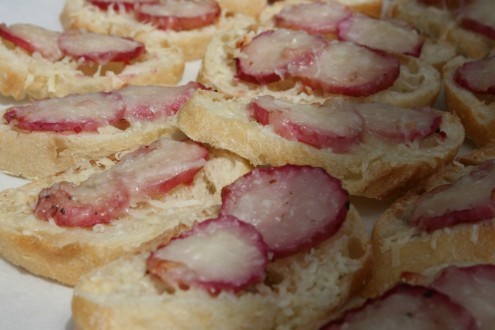 Roasted radishes with garlic, topped with Parmesan from the Sartori family cheesemakers in eastern Wisconsin. 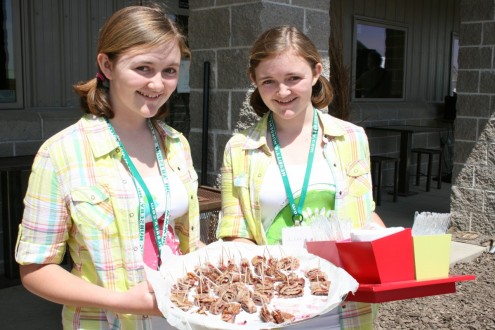 Aubrey and Hannah (or vice versa, sorry) Killen helped hand out the snacks at the Saturday event.

It’s strange being a progressive locavore in a place that city folks presume to be uninformed. “We get a lot of backhanded compliments,” says Leah. “Like, ‘Hey, this coffee is actually good!’ People think they’re in the middle of nowhere so they’re going to get Folger’s in a styrofoam cup.” But Leah gets her coffee from a “global-local” family coffee company called MorningStar, owned by a third generation Brazilian coffee grower who roasts his coffee in St. Paul. The coffee is certified organic, shade-grown, kosher, and designated “Fair Trade” by the Rainforest Alliance. 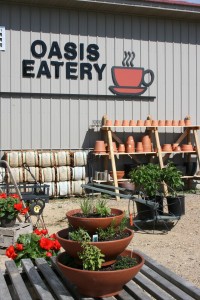 Leah is a member of the Food Alliance — throw in all the virtuous buzzwords you know and you’ll get the picture — and she could not be more serious about promoting sustainable eating. She serves breakfast and lunch at the Oasis Eatery, where everything is as fresh and seasonal as you could possibly imagine. On the menu, you’ll see that you can order a sandwich or a calzone with “meat/cheese/vegetable,” otherwise unspecified: that’s because you’re going to get whatever meat/cheese/vegetable is in season and locally available. In my experience, you can’t go wrong with any of the options. Some of them may be a little weird or unexpected, but that’s what you should expect when you’re on the cutting edge.

The lovely pre-Mother’s Day festivities wore on; people ate snacks and bought copious supplies of potted flowers, vegetables, and herbs in the Nesbitt greenhouse (plants sustainably grown at the nearby Rush Creek Growers). A few reckless souls got up and sang along with Yata, karaoke-style. When the Nesbitts open their doors for the annual “Happ-E Hill” fall event, featuring pumpkins and mazes and wagon rides and cider, thousands of people turn out and swarm over the grounds. 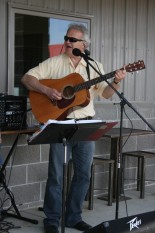 I don’t know why the Mother’s Day event wasn’t swarming, but if there’s any justice in this world, next year masses of people will carpool to revel in the peaceful, down-home, culinarily adventurous Nesbitt scene. Until then, eat local, cook Northern Heartland, and say hi to Leah/Lee/Leon whenever you’re in the neighborhood.