Seven BNSF and Minnesota Commercial Railroad officials and their environmental consultants met June 27 with residents of the St. Anthony Park neighborhood in St. Paul to discuss the impact of increasing amounts of sand being transported through the neighborhood by train and truck.

The sand comes by truck from western Wisconsin quarries and is dumped on to asphalt where it is picked up by a front-end loader and dumped into train cars that sit on the track until a they get a full train to go to Texas for processing, said Brian Sweeney, assistant vice president for public affairs for Burlington Northern Santa Fe Railway.

“This is not frac sand,” Sweeney said. “The sand cars go to Texas where the sand is processed into frac sand. This is raw, unprocessed sand. It presents no health risk.”

In Texas, the sand is processed into frac sand that is then shipped all over the nation for use in hydraulic fracking, a controversial method of forcing natural gas from shale. Frac sand is shipped in covered cars, he said.

The St. Anthony Park Community Council’s environment committee called meeting after neighborhood residents saw open train cars filled with the sand and grew alarmed about the possibilities of increased dust and the hazards of frac sand.

Railroad officials could not say how much sand travels through the neighborhood on a daily basis, despite questions submitted to them in advance. Sweeney said that only 0.5%-1% of the material transmitted is anything other than normal sand found anywhere.

In response to a question from a trucker who said all his loads were covered, Sweeney said he could not say how much it would cost to cover the railroad cars, but he insisted the moisture in the sand made covers unnecessary.

Two representatives of the Minnesota Pollution Control Agency said they had little information on any potential dangers from the transportation or storage of the fine sand and that, even if they did, they have no authority over the federally regulated railroad yards. They can regulate truck traffic, however.

“People are contacting us almost every day wanting to know about the processing of frac said,” said MPCA public information officer Ralph Pribble. “We’ve been studying sand and gravel for decades, but we have relatively little experience with the fine sand.”

The state has no data on the amount of silicon sand in the air and the federal government has no standards for silicon, he said

The MPCA has no studies on “ambient dust” to determine how much a new sand-handling facility changes air quality once it’s started, Pribble said. Such a general environmental impact statement would require a special state appropriation from the Legislature, but it would helpful for studying other changes involving forestry and feedlots.

Regulatory interest has grown in the particulates being transported and the state can regulate trucks. The state’s interest is in preventing particulate matter from becoming air borne and preventing dust from going beyond lot lines, Pribble said. He said people with complaints can contact the MPCA.

Sweeney said the railroad is a common carrier could not refuse to transport legal materials without facing a lawsuit, and he said he could not release environmental studies without consulting with the clients whose studies could contain proprietary information.

After consultants said they used standard OSHA and other federal methods to study the air quality, Sweeney agreed to seek permission to release the environmental studies.

Industrial hygienist Dave Gutterud, a consultant for Minnesota Commercial Railway, said he relies on standards set for indoor air quality because none have been established for outdoor dust levels.

He passed out a diagram showing that a grain of this sand is much smaller than a human hair. “It’s very small stuff that we’re dealing with when we do this testing.” 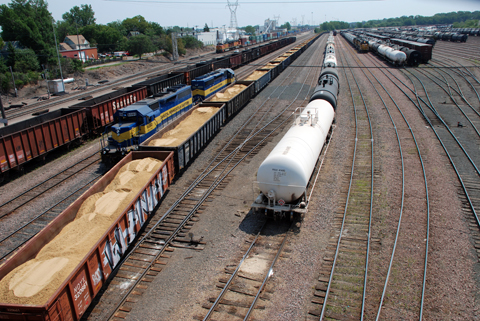 His firm has tested the air quality three times in four locations—including “ground zero,” up wind and down wind—on three separate days to determine the amount of dust in the air when sand is being moved.

“All samples were below detectable levels for respirable dust and no respirable silica was detected in any sample,” he said.

Steve Yetter, co-chair of the environment committee, conducted the meeting and restricted the discussion to the sand issues in the neighborhood rather than the larger issues of sand mining in western Wisconsin and the use of fracking to drill for oil and gas.

Nonetheless, one resident suggested the residents help those hurt by the negative impact of fracking by trying to stop the transportation of the sand. Another speaker raised questions about the railroads withholding their studies and expecting the public to trust them.

Suzanne Hattenberger, BNSF manager of environmental operations, released an executive summary of the loading facility, saying that no risk of silicosis was posed because levels of concentration were well within federal OSHA requirements and those of the National Institute for Occupational Safety and Health.

Yetter and community organizer Lauren Fulner-Erickson asked the more than 40 people to raise their hands if they had a question. Each person asked one question in turn and then they asked for another round of questions. This was repeated a third time followed by an opportunity for statements.

Yetter said the environment committee will discuss the topic at its next meeting at 7 p.m. July 25 at the council’s headquarters at 890 Cromwell Ave. in St. Paul and documents supplied will be posted on the council’s website.

Wayne Hall, director of operations for the Minnesota Commercial Railway, provided additional detail after the meeting. He said the trains travel about eight miles per hour while on their property and about 14 mph on the BNSF line in the city.

The facility operates Mondays through Fridays, not 24/7 as in some other cities. The full train contains between 70 and 100 cars of sand.

The Minnesota Commercial Railway was formed in 1987 to replace a cooperative Twin Cities rail operation among the many railroads that traversed the Twin Cities. About 90 employees work on its 120 miles of track and 30 people do some work on the sand operations.