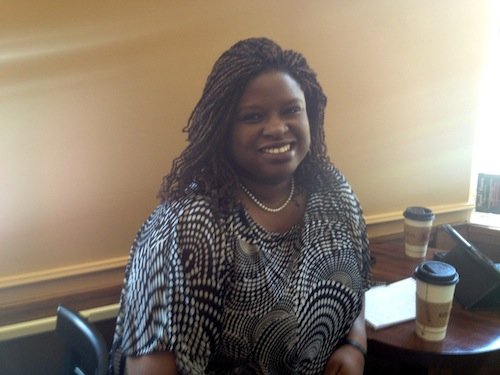 Lawyer, professor, scholar-activist, preacher, mom, volunteer and blogger, Nekima Levy-Pounds has a lot on her plate. The recent Star Tribune blogger (in addition to her writing for MinnPost and TC Daily Planet) is being thrown accolades left and right, but she takes it all in stride.

From humble beginnings, Levy-Pounds has risen high in her career. She feels a responsibility to give back, “to try and be a driving force for change and to teach my law students that they can also be a driving force for change and thinking about the greater good instead of just oneself,” she said. “My life would be unfulfilling if I only focused on my only aspirations instead of what’s in the best interest of the broader community.”

Levy-Pounds considers herself a scholar-activist, which she’s been throughout her career, but it came into focus when she launched the Community Justice Project –—officially in 2007 though the work started in 2006. The program began as a partnership between the University of St. Thomas School of Law and the St. Paul branch of the NAACP. Levy-Pounds and a colleague named Artika Tyner, who had been one of Levy Pounds’ students, worked together to develop the program.

As founder and Director of CJP, Levy-Pounds works with students who learn to use the law “as a tool to advance the cause of justice in our society,” Levy-Pounds said. The students engage in legal research and writing, advocacy, negotiations with government stakeholders, and hold town hall forums and produce reports, making them a partial think-tank.

Recently, CJP has been doing a lot of work around the school to prison pipeline, “trying to raise awareness about some of the systemic patterns and practices of discrimination that are impacting kids of color and kids with disabilities,” Levy-Pounds said.  Other issues CJP has been involved with include juvenile justice initiatives with Ramsey County and Hennepin County as well as economic justice work.

Jazz Hampton, a law student at St. Thomas, says the students all refer to her as PLP (Professor Levy-Pounds). Hampton says his professor has gone above and beyond — helping with a particularly difficult paper or just being there for students. As an African American man who grew up in the Twin Cities, he says Levy-Pounds is an inspiration to him. “She has so much knowledge,” he said. “She’s so well versed and so well spoken.”

Through CJP, Hampton has become involved with Brotherhood Inc., a nonprofit organization that CJP helped found and supports. Based in the Rondo neighborhood in St. Paul, the organization helps young African American men ages 16-24 who have been involved or are at risk of being involved in the criminal justice system or gangs. Hampton said he has worked with Brotherhood Inc. on legal issues, helping, for example, with a trademark issue for the coffee that the young men sell.

Sidiq Abdullah, who is part of the Brotherhood Inc. program, joined as a favor for a friend, coming only once a week at first. Discovering that “they actually cared about us,” Abdullah found himself gaining a whole new mindset on life. “I have more hope and motivation to do better,” he said.

Abdullah strives to be like Levy-Pounds. “All the stuff that she’s done — she’s awesome,” he said. “She’s the one person I know I can count on if I needed help.”

Abdullah credits Levy-Pounds for pushing him to graduate from high school, as she sat in the office with him as he finished his last packet. Now, he said, she’s pushing him to get back into college. “She has such a big heart,” he said. “Any time I need extra motivation, I can give her a call.”

Levy-Pounds says that her colleagues at St. Thomas have been extremely supportive of CJP. “They know I’m venturing into dangerous territory, particularly when talking about racial justice and equity,” she said. “However they allow me to be myself and to speak truth to power and to speak in my own unique voice based on my knowledge, experiences and expertise. That’s refreshing to be in a place where I can openly talk about civil rights issues and faith and justice and have that be supported.”

Born in Jackson, Mississippi, Levy-Pounds moved to Los Angeles when she was eight years old. When she was nine, she decided to become a lawyer, in response to the inequitable conditions she saw in her community in Los Angeles. “What I saw were high rates of unemployment, low rates of educational attainment, high rates of poverty, gang violence and just general hopelessness and limited access to upward mobility and economic opportunity,” she said. “And I just thought that there has to be something that can be done about the conditions in the community. I saw lawyers on televisions on shows and I thought — I want to do that.”

Though she was living in a poor neighborhood, she felt nourished and supported by the adults in her community, particularly her teachers. “I had very strong African American female teachers who provided me with access to opportunity and who pushed me to be the best that I could be,” she said. When she was 14, her teachers nominated her to be in the Better Chance program, a scholarship program that gave her the opportunity to go to boarding school in Massachusetts. Her teachers “recognized my circumstances being surrounded in poverty, but they didn’t see that as a limiting factor in terms of what I could accomplish,” she said. “That’s the problem that I see today within our public school system. Too often we use poverty as an excuse for why children are not able to gain access to high quality education. I think that is a false barrier that has been put into place because some of our most brilliant children are growing up in poverty.”

Eventually, Levy-Pounds went to the University of Southern California, becoming the first in her family to earn a bachelor’s degree. Then she went to law school at University of Illinois. “I didn’t realize all the hurdles I would have to overcome, but this is definitely my destiny and my calling, and it’s a way for me to give back to the community,” she said.

A mother of five children (two of whom are adopted), Levy-Pounds takes their education very seriously. Two of her daughters attend the same boarding school she attended, and her two sons attend Harvest Prep and Best Academy. Her eldest daughter just graduated from Park Center High School, and will attend North Hennepin Community College next year. Having five kids on top of all the community and professional work she does wouldn’t be possible, she said, without her husband, who’s an integral part of the work she does and raising the kids.

As if all of the above weren’t enough, Levy-Pounds also serves as chair of the board for both Everybody In — whose goal is to help close the gaps in unemployment between Blacks and Whites and Native Americans and Whites in the region by 2020, — and the African American Museum and Cultural Center. “It’s a lot to handle,” she said, but she never feels like it’s too much. “I draw strength and inspiration from my ancestors and freedom fighters from the past who had to work under even more challenging circumstances,” she said.

Every other month, Levy-Pounds preaches at First Covenant Church of Minneapolis. She calls her faith the driving force for what she does. “I believe that faith without works is dead,” she said. “So if I say I’m a person of faith that should mean something.” In addition to preaching, she’s also the chair of a group she formed at the church that addresses racial and economic justice. “The goal is to get the faith community more involved on social justice issues because right now I feel that there’s a disconnect,” she said. “Most of the time we’re in a charity based mode. And we need to move towards a justice-based mode of thinking and doing.”

Recently, Levy- Pounds has won awards from the Hennepin County Bar Association, as well as the 50 Under 50 Most Influential Lawyers of Color. In 2012, she won the Profiles in Courage Award from the MN Association of Black Lawyers. “I’m constantly amazed and humbled when I receive an award because I don’t think about the work that I do from that angle,” Levy-Pounds said. “I just think that I’m walking out my calling. So I’m always surprised when people are taking notice and paying attention and it gives me hope in the sense that these issues are being elevated by a group of people that I didn’t know were focused on that.”

In addition, Levy-Pounds has blogged for TC Daily Planet, MinnPost, and most recently the Star Tribune. She sees her writing as “a platform to engage a broader audience on racial justice and social justice issues and to contextualize current events and issues that impact communities of color, because I feel that there’s a dearth of focus in the public arena on issues that impact the poorest, most underserved communities and putting those issues in a broader context.” As someone who grew up in poverty, Levy-Pounds feels it’s important to “be a voice who’s helping shed light on those issues but also offering solutions.”

Seeing most problems that face underrepresented communities as solvable, she finds it’s a matter of a lack of political will that these problems aren’t addressed. “We demonize and place blame on those who don’t run the systems that impact their lives and who have very little political representation, so it’s no wonder that they are constantly facing marginalization and oppression,” she said. “So I want to see poor people in power to lead and to use their voices and to contribute ideas on how to address the issues that actually impact them.”

She also loves to laugh. “I have an interesting sense of humor and I find humor in the strangest things,” she said. “So my students will find me laughing until I cry.” She loves poetry and spoken word, and through CJP engages young people through poetry and spoken word, starting a forum called Uncaged Voices, which is a poetry slam on youth justice. They’ve held two events so far at Intermedia Arts.

Finally, Levy-Pounds strongly believes in the power of entrepreneurship to address issues of economic injustice. “We have so many entrepreneurs in inner city communities, but they are rarely given the chance to legitimatize their trades and to gain access to type of capitol that’s needed in order for them to build a strong business that helps them to support their families and also create jobs for others in the community,” she said. “So I want to see us focus more on entrepreneurship and building a stronger economic infrastructure in our poorest communities. I know charity is important, but our focus on charity right now is too heavy. We need to focus on economic justice and teaching people how to build wealth and venture into the business arena.”

Read articles by Nekima Levy-Pounds in the Daily Planet.