It’s a shame that we lost Neil Armstrong over the weekend, but I’m grateful that he was the one chosen to be the first to set foot on the moon. Imagine if, instead of the quiet, private Armstrong, a shameless braggart like Donald Trump had been first off the LEM. There’d have been no tranquility at Tranquility Base. Or should I say Trump Crater?

But Trump wouldn’t have had the patience to do the necessary training, nor the calm judgement to properly command that mission – “Aldrin, you’re fired! I mean, help us blast off here and get back to Earth, but then … you’re fired!” And of course the famous first quote would have been quite different.

“That’s one small step for man, but one giant leap for me, Donald Trump! No one else can ever be the first man on the moon. I Win! I’ll buy and sell hotels and casinos and make and lose fortunes, but this, I will own forever, and you’ll never stop hearing me talk about it!” 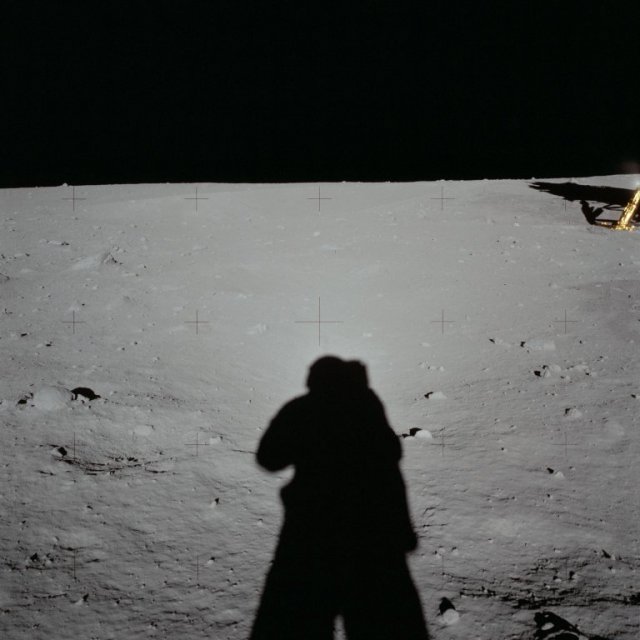 Neil Armstrong’s self portrait on the Moon, 1969. (Image courtesy of NASA)

But then the statement we heard from Neil Armstrong was not exactly what he meant to say. Of all the gloves, nuts and bolts and bits of debris and flotsam that Americans have left in space in the course of our efforts to reach the moon, the particular item that interests me most is Neil Armstrong’s dropped “a”. When he stepped off the LEM an on to the moon’s dusty surface, people all around the world heard him say “That’s one small step for man, one giant leap for mankind.”

Later, Armstrong would insist that he actually said “That’s one small step for A man, one giant leap for mankind.” He acknowledged when listening to recordings made of his first moments on the moon that he didn’t hear the “a”, but confirmed that he said it. Or at least that he intended to say it.

I believe him, because adding an “a” before “man” is the only way his historic statement can make sense. Without it, he and mankind are essentially the same. And it suits this humble fellow that he would want to make a point of it – he is simply A man taking a step. The lasting achievement belongs to everyone.

Analysts have suggested the technology of the time may not have been good enough to capture a sound (35 milliseconds!) as brief as that singular “a”, but I prefer to believe that Armstrong’s indefinite article bounced off Earth’s invisible humility filter, and it is still drifting in space.

On a clear night you can still see it up there, tumbling.

When have you had a crucial part of an important message lost in transmission?