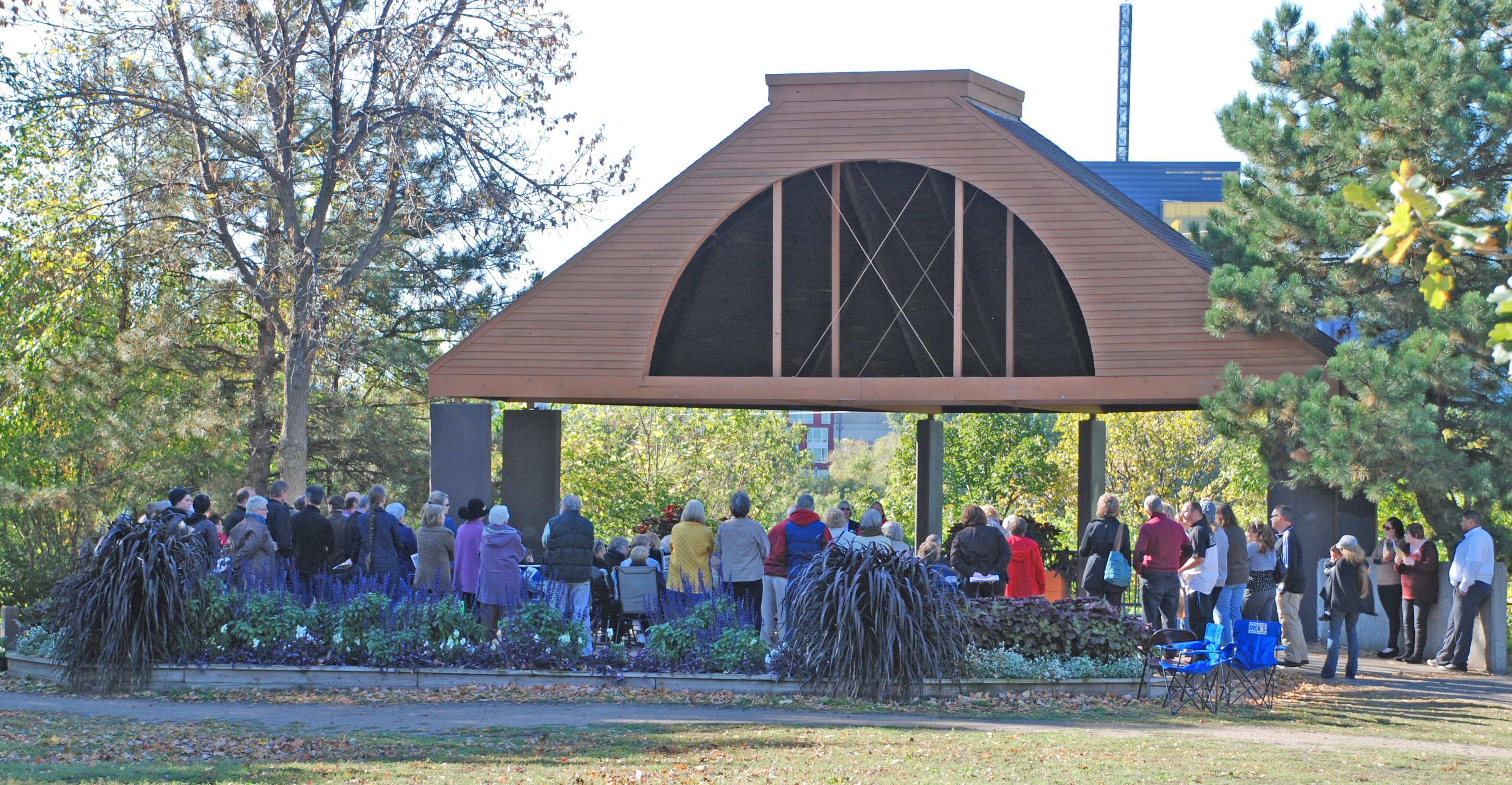 Anderson had created and maintained a garden at the east end of the Stone Arch Bridge in memory of her late partner Joan Leigh, who helped convert the bridge to a pedestrian and bicycle path after the railroad abandoned it.

“If she were here today, Joyce wouldn’t be sitting here; she’d be over there weeding and tending the garden,” said Mugs Enstad, a crew leader for the Minneapolis Park and Recreation Board.

Anderson recruited park staff to think of the park as their own as well as hers, Enstad said. She and Rochelle Rau shared memories from the park staff.

The garden surrounds a bench purchased by the Marcy-Holmes Neighborhood Association to honor Leigh’s role in getting the state to purchase the bridge and convert it into a pedestrian and bicycle trail.

The converted bridge opened in 1994 and the Joan Leigh bench was dedicated in 2002. Leigh had been MHNA president for several terms at different times.

Anderson possessively guarded the garden during riverfront festivities, including fireworks displays, when people would trample the plants. On some occasions, she put up signs and yellow crime-scene tape in her effort to keep people off the plants.

Jean Olson, a ministerial intern at the First Unitarian Society of Minneapolis, conducted the service, which included shared memories and a “hootenanny for Joyce Anderson” with the group singing “This Land Is Your Land,” “The Happy Wanderer,” and “Vive L’Amour.”

Wald had come from her home in Ramsey on weekends to help Anderson tend the garden.

“I will keep up the garden as you’ve asked me,” Wald pledged on the Legacy site, adding, “such an amazing woman who cared for so many.”

Some proposed that Anderson’s name be added to Leigh’s on the bench.

Enstad said the Father Hennepin Park where the service was held was largely undeveloped when she began working with Anderson.

Anderson was born June 7, 1923, in Becker, Minnesota. She taught at the Marcy Open School in the early 1970s and later at the school associated with the Children’s Theater Company in Minneapolis.

In late September, she fell in her home and, after a time, lost consciousness and died a couple of days later in Regions Hospital in St. Paul.

She had asked that memorials be sent to Minneapolis School District 1 or the Minneapolis Park Board.

Someone put a rose on one of her signs warning people out of the memorial garden.