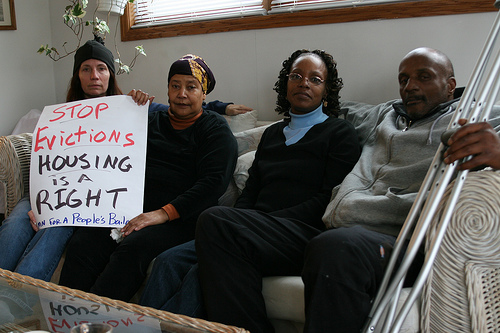 All photos by Dave Underhill

Poverty rights activists broke into at least a dozen vacant Minneapolis buildings this week and helped homeless families move in.

This week’s actions are part of a growing national movement to illegally open up thousands of vacant, foreclosed homes to provide housing for the growing number of homeless people. Over 3,000 Minneapolis homes went into foreclosure in 2008. Advocates estimate that over 7,000 Minnesotans are homeless. Most Twin Cities’ homeless shelters have been filled to capacity for months.

On a recent afternoon, organizers planned their next takeover while eating cabbage, rice, sausage, and corn bread prepared by Rosemary, a 59-year-old African American woman facing eviction from her home. Rosemary, who asked that her last name not be used, plans to remain in her house illegally after the March 31 eviction date. In the meantime, she spends her time organizing for tenant’s rights. 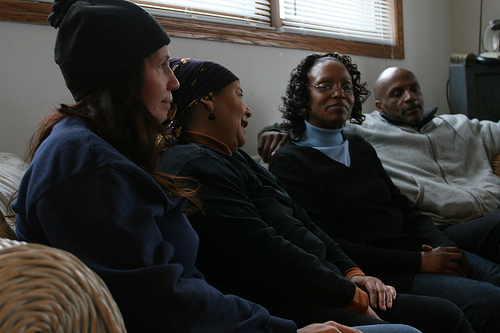 “Welcome to the revolution,” Rosemary said, greeting a homeless couple looking for housing.

Lonnetta and Dwayne took a seat on Rosemary’s couch. Dwayne, 52, walking on crutches from a series of recent foot surgeries, explained that he lost his janitorial job in June when he broke his foot. The married couple asked that their last name not be used.

Forced to survive on Lonnetta’s $637 a month Social Security check, the couple soon became homeless. Social service providers told them to stay at Harbor Light, a homeless shelter in downtown Minneapolis, where the couple would be housed on different floors. Lonnetta, 48, feared being separated from her sick husband who she said needs frequent reminders to take his medication. Instead, the couple started living out of their truck.

A relative put Lonnetta and Dwayne in contact with the Poor People’s Economic Human Rights Campaign, a national anti-poverty organization based in Minneapolis. 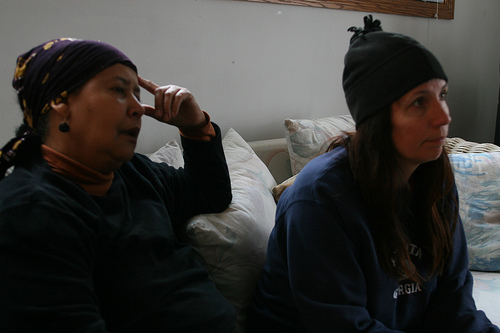 Honkala, the group’s National Organizer, became an activist in her teenage years when she and her young son lived in her car after becoming homeless. When a drunk driver hit the car one night, Honkala said she got fed up, and moved into a vacant Minneapolis HUD property for several months.

After years of anti-poverty work, Honkala rose to national prominence in the 1990s by founding the Kensington Welfare Rights Union in an impoverished Philadelphia neighborhood. The activist group helped move homeless families into vacant properties, and used the publicity from those occupations to force the city to issue housing vouchers.

Honkala moved back to Minneapolis two years ago and started matching homeless families with vacant buildings. She estimates that about forty families have been housed since her return, including twelve this week.

Honkala met Dwayne and Lonnetta last week. She offered to find them housing in a vacant home. The couple readily agreed.

The plan turned out to be more difficult than the couple anticipated. Activists first attempted to house the couple in a vacant South Minneapolis home. A city inspector and the police soon arrived and demanded they leave. The police issued trespassing citations to Lonnetta, Dwayne, Honkala, and Manuel Levinsholden, a 19-year-old organizer. Honkala said that a pro bono attorney will provide legal assistance.

Activists then led the couple to Rosemary’s house, where they hoped to house the couple in one of the block’s five vacant homes. While chatting in Rosemary’s living room, Honkala received a phone call. “Well, that’s not going to work,” she said. “Burglar alarms.”

However, with no shortage of properties to choose from, it only took a few phone calls to find a new location several blocks away. Within a few minutes, Honkala, Levinsholden, Lonnetta, and Dwayne were inside a large, empty yellow duplex. 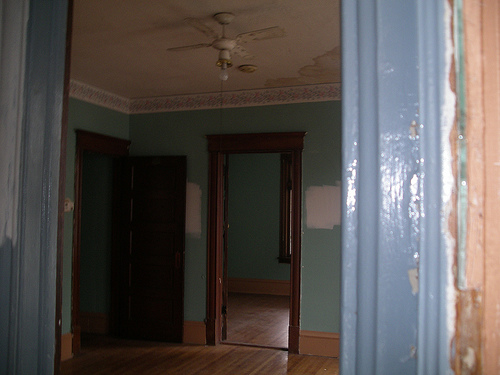 Dwayne cautiously walked around broken glass on the kitchen floor and made his way into the dining room, surveying the hardwood floors and large windows. “I want it,” he said.

“Look at that bathroom,” said Lonnetta, turning on what appeared to be a brand new light fixture. “That’s pretty.” She then made her way into the living room, painted blue, but marked with dozens of white splotches to cover up graffiti.

When asked how the activists will get the heat and hot water turned on, Honkala grinned and said, “God turns on the utilities.”

Rosemary, who came by to inspect the couple’s new home, stumbled while walking up the steep staircase to the second floor. After dusting herself off, she looked around the upstairs kitchen: a row of old wooden cabinets and an empty space where a dishwasher might have been. “Not bad,” she said. 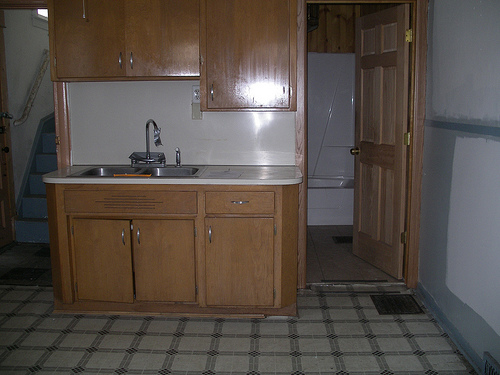 Meanwhile, Honkala grabbed several documents left on the downstairs kitchen counter, including paperwork stating that HUD owns the house. One document indicated that the home was last inspected on February 3rd.

“This is just a waste,” she said. “It’s a waste to have thousands of empty homes like this and people with no place to live.” Organizers plan to provide furniture and help the families with basic renovations.

Honkala said that the Poor People’s Economic Human Rights Campaign will continue to house the homeless in vacant buildings until the government can provide a safe, affordable alternative. More takeovers are planned for this weekend.

Meanwhile, Rosemary faces eviction in a few weeks, but has no plans to leave. “We’ll pack my house with people,” she said. “It’ll be a showdown.”

“Wait,” Dwayne said, looking surprised. “You’re going to lose your home, too?” He shook his head. “No man, we ain’t gonna let them do that, no way. We’re neighbors.”

Madeleine Baran is a freelance journalist, specializing in labor and poverty issues. Her articles have appeared in The New York Daily News, Dollars & Sense, Clamor, The New Standard, and other publications.