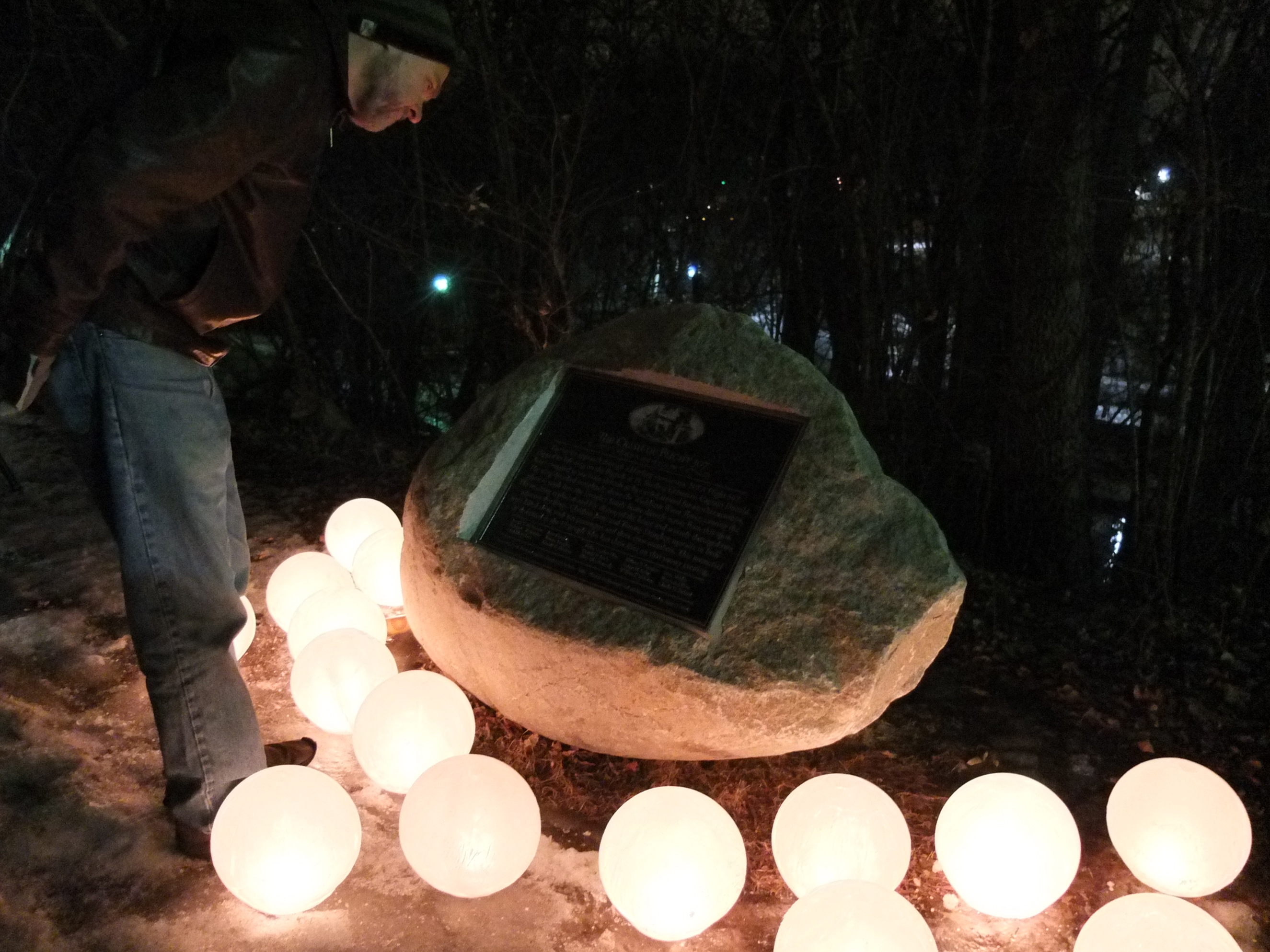 The boulder memorial describing the March 7, 1950 crash of Northwest flight 307 surrounded by 15 ice globe luminaria, one for each of the fifteen people who died.

Neighbors and friends gathered around Diane Doughty-Madsen providing a sense of warmth on a cold evening. They stood near fifteen ice globes illuminated  by candles. The group assembled to remember the  anniversary of the crash of Northwest flight 307 near Minnehaha Creek. It was on March 7, 1950 that a twin-prop passenger plane, disoriented in a snowstorm, damaged a wing as it flew too low and crashed into Doughty-Madsen’s house.

It was about 9 p.m. and Doughty-Madsen’s younger brother Tommy (8) and sister Janet (10) had been tucked into bed upstairs. When the plane hit the two-story house, the children were killed instantly as were the 13 passengers and crew on the plane. Doughty-Madsen (age 15 at the time) and her parents who had been downstairs watching TV escaped by quickly jumping out a window. The house burned furiously, fueled by the plane wreck.

Doughty-Madsen’s high school friend Laurie Gustafson was on hand at the memorial to remember the events of 62 years ago. Doughty-Madsen expressed how glad she was to have her there, “She was such a part of my life then.” The two were “around the corner” neighbors and classmates at Washburn High School. After the family lost their home, they moved to a hotel in downtown Minneapolis for a time. Doughty-Madsen was glad to have a friend who provided her with a second home at a time of upheaval. Doughty-Madsen said, “If it hadn’t been for [Laurie’s mother]…she was just wonderful to me. I think about that–taking me in–she didn’t know how I was going to be or react or anything; she took me in and took such good care of me.”

The event was front page news. Over time, it faded from public memory. Diane Doughty put the newspaper clippings away in a box and focused on other things including her education, marriage and raising a family. A new house was built on the site of the house that was demolished at 1116 West Minnehaha Parkway.

However, some 60 years later, neighborhood resident and a former Minneapolis City Council member Mark Kaplan became interested in the story of the plane crash and was moved to raise money for a memorial. Over $3500 was raised to put a 2 1/2-ton boulder with a cast aluminum plaque along Minnehaha Parkway across the street from the former Doughty home. The plaque briefly describes the events of the evening of March 7 and lists the names of the victims.

Kaplan contacted the surviving family members of those who perished in the plane crash as he made plans for the memorial events. Many of them, including Grace Jones, the 100-year-old wife of Flight 307’s pilot Donald Jones, joined Doughty-Madsen at the August 27 dedication of the memorial boulder.

It was a much smaller group who braved the cold and darkness on the recent March evening to stand at the spot where 62 years ago the plane had crashed. Some were friends, some were Lynnhurst neighbors like Jenny Hedberg who made the ice globes and Mark Kaplan who organized the event. At 9:02 p.m. the group of 20 people shared a moment of silence.