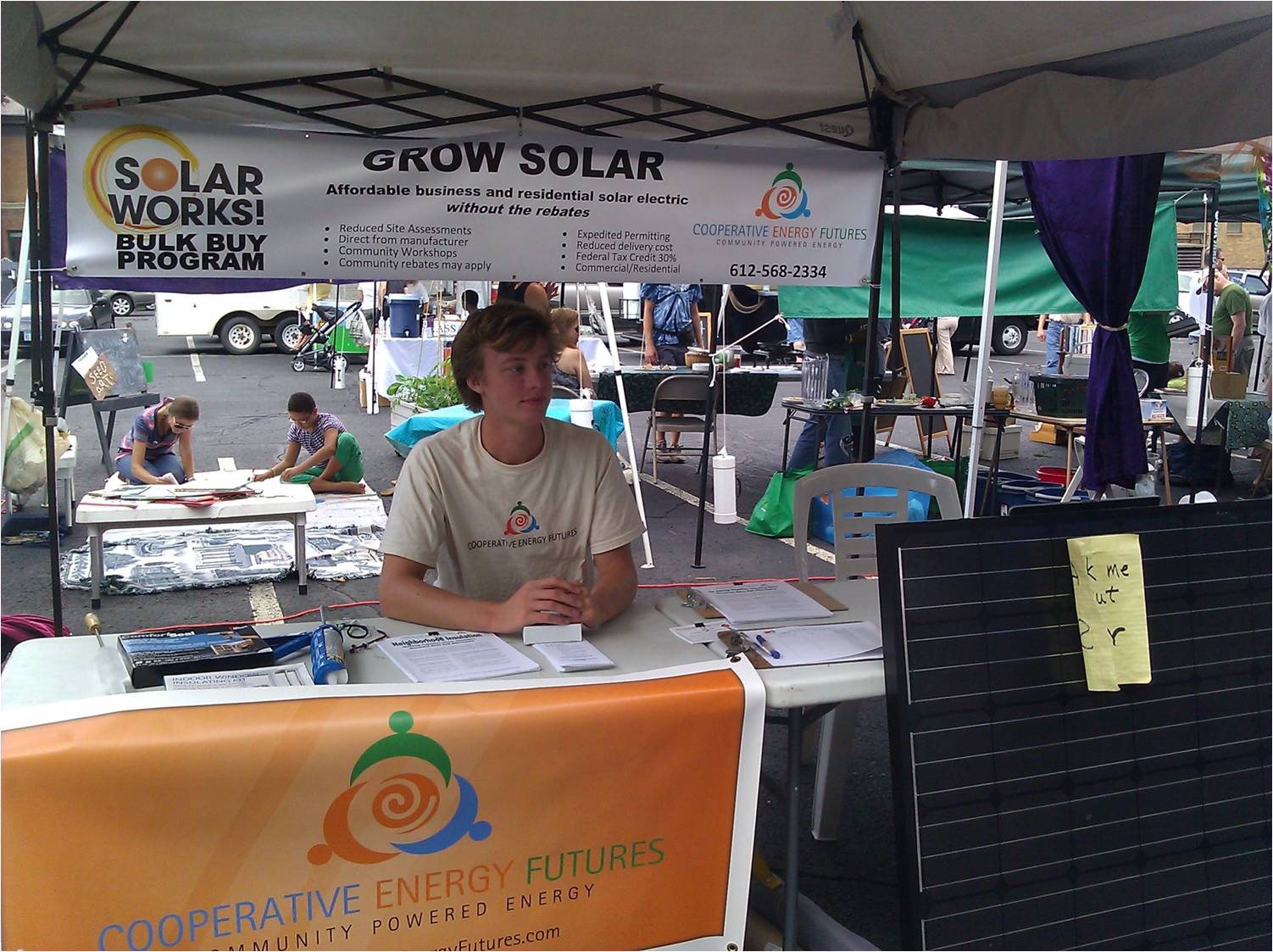 A quiet revolution is taking place across the rooftops, attics and walls, and community meeting rooms of a number of Twin Cities neighborhoods. Groups of residents are coming together to make the transition to a clean, efficient, and community-based energy future, working together to tighten up their homes’ energy use and generate clean energy in the neighborhood. Cooperative Energy Futures (CEF), a co-op of community members, has emerged to help residents work together to cut costs and simplify the process of contracting home efficiency and clean energy improvements. As the first results of its projects emerge, several neighborhoods and nearby cities are adopting the model. In May 2013, Cooperative Energy Futures is launching four community energy programs across the Twin Cities.

In early 2012, the CEF launched a neighborhood insulation group-contracting program, helping a group of South Minneapolis residents in the Phillips, Powderhorn Park, Corcoran, and Longfellow neighborhoods work with a qualified home efficiency contractor, SustainMax, to insulate and air seal their homes, cutting winter heating costs and summer cooling costs by up to 50% and creating a noticeable improvement in home comfort.

“We already had an energy audit and knew we needed insulation, but we procrastinated: the CEF neighborhood insulation project helped us act. We’re happy we participated – our home is super tight and now it’s warm upstairs in the winter” said Joe Hesla, a participant from Corcoran neighborhood.

This program has since expanded, with over 30 residents currently participating in the second round of the program in Falcon Heights, Northeast Minneapolis, and South Minneapolis.

In summer 2012, Cooperative Energy Futures began a partnership with Applied Energy Innovations (AEI), a Minneapolis based solar installer, to launch the Grow Solar program, the first effort to coordinate a residential bulk-buy program for solar electric panels in Minneapolis. 42 households participated in the Grow Solar program including ten households organized through Solarize Kingfield, a project of the Kingfield Neighborhood Association. A total of 133kW of solar arrays were submitted to the Xcel Energy rebate process on March 11th and were still awaiting confirmation as of April 15th. Individual household arrays ranged in size from 1.3kW to 10.6kW, with an average size of 3.17kW. By using TenK Solar panels manufactured in Bloomington, Minnesota and layering the federal tax credit and the Xcel Solar Rewards and Minnesota Made bonus rebates, the Grow Solar program was able to lower the cost of solar (after the incentives) to $3,000-$8,000 for a 4kW array (depending on the tax treatment of the rebates).

Costs of solar, usually measured in dollars per watt installed capacity, have declined precipitously over the past decades. Residential systems that would have cost $80/W in the 1970s and $7.50/W as recently as 2010 can now be installed on residential properties for $5/W, with larger commercial systems coming in as low as $3/W or less. These prices means that over the 25-year warranted life of the solar array, getting electricity from solar is now cheaper than buying it form the grid at today’s rates (which are also rising, with a 10.7% proposed rate increase from Xcel Energy in 2013 alone).

Upfront costs are still a barrier for many. While the $1,000 or more that most households pay for electricity each year adds up quickly, many have trouble accessing the $15,000-$20,000 needed to install a full-home array, which is essentially buying 20-30 years of electricity up front. While several banks now offer solar loan programs, they often rely on good credit ratings, a challenge for an increasing number of people in a tight job market with many houses underwater. Recent rebate programs can drop the cost by up to 60%, but demand for these rebates is so high that the rebate money available has been rapidly exhausted. In fact, Dustin Denison, owner of Grow Solar installer Applied Energy Innovations estimates that when the 2013 rebate application window opened on March 11, 2013, the rebate funds available were used up through 2013 and into 2014 by the end of the day. The dependency on limited rebates has created boom and bust cycles in the solar industry, making it hard to develop projects and drive down solar costs.

The 2013 Minnesota legislative session is weighing some proposals that could stabilize the solar industry and enable many more people to join the clean energy future. These changes include a “value of solar” rate that would require utilities to pay any solar owner the value that solar provides to the grid, which includes concentrated generation during peak usage times and reduced distribution losses. Coupled with other provisions that would raise the size limit for distributed clean energy projects and provisions that could enable community ownership of neighborhood clean energy systems, these legislative changes could make it easier and more affordable to go solar.

The second phase of Cooperative Energy Future’s bulk buying programs is launching May-August, with deadlines for residents and groups of neighbors to sign up by August 15th 2013 and to commit to projects by September 15th, 2013. The four programs currently offered include:

Details about these programs can be found at http://cooperativeenergyfutures.com/bulk-buying/, where dates and locations of educational workshops and events where interested residents can learn more will also be posted. While still focused in Minneapolis, the program is expanding to nearby cities including Bloomington, Edina, Falcon Heights, and parts of St. Paul. Interested residents, neighborhood groups, and local governments wishing to bring Cooperative Energy Future’s bulk buying programs to their community should contact contact@cooperativeenergyfutures.com, or call (612) 568-2334.