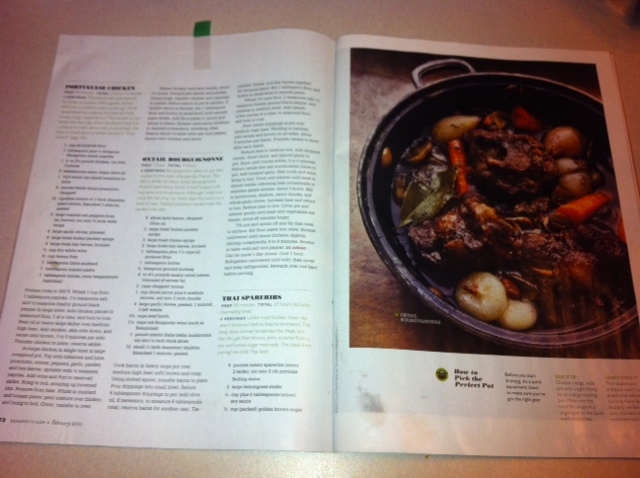 Why during the start of a snow storm I decide to venture out and buy all the ingredients to make the Oxtail Bourguignonne from the February Bon Apetit Magazine and the Poached Chicken with Chocolate Mole from the Women’s Health Magazine (WH Mag) is beyond me.

The Bro reminded me that I should spend more dollars at Shuang Hur Oriental Market because after all, one of his best friends’ parents’ own the place. I thought this would be a good place to start gathering the ingredients because the magazine noted that it’s hard to find oxtail these days. BUT…most of the time Asian grocery stores carry this item. I was right! I was able to get exactly 4.5 pounds – what the recipe called for. Summary of my experience:

1) Shallots for the Oxtail Bourguignonne- I got a whole bag instead of picking each one out one by one. In the future, I’ll probably defer to the latter because a couple of the shallots in my bag were rotting and I would have been short a few if it weren’t for the fact that there were a few more in there than the recipe called for

3) For the Chicken Mole, I was unable to find tomatillos or baking chocolate

So I ventured over to the Wedge for the other ingredients. Success! A little bit pricier, but everything was organic and I didn’t have to deal with driving too far away in the snow. $25 later, I was out the door and on my way to merry cooking.

After 4 hours of cooking, I am sad to report, I did not like either of the recipes.

The Oxtail Bourguignonne was not as flavorful as I had hoped for all the work that I put into driving around to find all the ingredients and the 3 hours I put in front of the stove. (Not to mention the almost $40 I spent!) I might as well have tried a slow cooker recipe as that is much less paintful. I’m so disappointed because it’s from Bon Apetit. This is the first recipe I’ve tried, but I always thought Bon Apetit was “the” magazine. Now I’m going to be more wary about which recipe I pick out to test.

The Chicken Mole was disgraceful. Do the people at WH Mag even test their recipes? I don’t know what went wrong – they said one can of tomatillos or 8-10 fresh ones. Maybe there were too many tomatillos or maybe they just didn’t include enough spices…it was just so bland.

Sigh, but at least it got me out on a snowy morning….and home safe enough to complain.