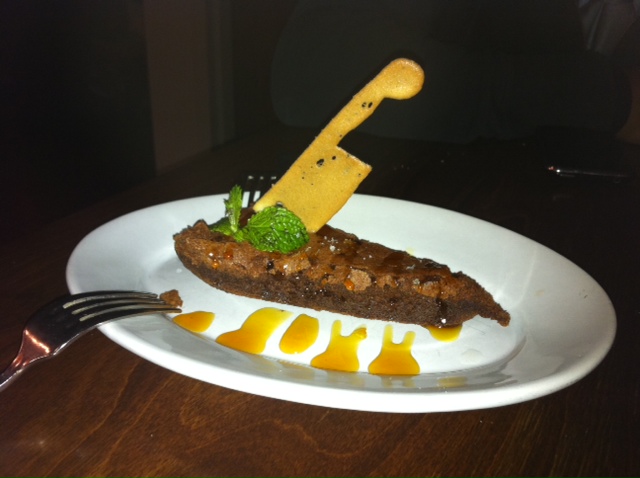 I should have seen it as a bad sign when O and I walked in and saw the big white piece of paper reminding all Groupon users that they can’t use their iphone app to pull up their Groupon certificate. (Note, that they are sorry for all inconvenience caused.) I was planning to accept my dining disaster when the hostess told me that I could just physically fill out a form instead of coming back another night. Phew. Then I’ll stay.

We got seated in the back, by the kitchen. Our waitress (who, btw, had great earrings on) comforted us by saying that it was the most “private” space available at the restaurant. In reality it was hard to hear because it was so loud and every few minutes someone walked by to use the door behind O’s chair which lead to the restrooms.

The food? The bread was bland. The olive oil left a bitter aftertaste. The calamari appetizer also didn’t have as much zing as I thought it should. O’s ribeye steak topped with blue cheese was probably the best made item we had that night. My beef carpaccio, over arugula, was also tasty. I would’ve liked to add some pepper to it, but there wasn’t any available on the table. We chose the chocolate torte which wasn’t very chocolatey, but I did like the butcher knife wafer that murderously sunk into the cake.

Parking was a bit of a nightmare as we were circling the streets for a metered spot. We, then, noticed the ramp by Kramarczuck’s so that is a good option for future patrons.