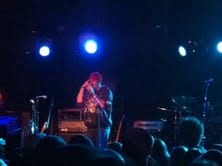 Does getting older mean that I have to make an extra effort not to become one of those people who complain that they never go out anymore? Is the challenge to cut back on sleep to prove myself worthy of being one of those “not so boring” adults?

On a shivering Tuesday night, the Bro, O and I decided that despite the weather and parking conditions that we were going to be among those crowded into the Cabooze to see George Clinton and the Parliament Funkadelics. Prior to the show, O instructed me to read about this classic opportunity on Wikipedia to familiarize myself with who these folks are given my seeming lack of appreciation of all things pop culture. “It’s funk and soul,” O explains.

As usual, I wish I would have done more research prior to entering the scene. I didn’t realize it was an opportunity to whip out all my Halloween accessories. I saw a woman with a blinking light hula hoop and another hippie girl who wrapped this sparkling tube light accessory into her dreads. Then there was the other girl with her butterfly wings and the guy with the peace sign sunglasses as shades. Okay. Why did I package myself up in my cords and U of M sweatshirt? My attire totally gave me away.

Then, in between gasping for oxygen in the pot filled air and jumping up every other second to see the stage, the Heatbox started performing. Suddenly, all the forces of the universe it took to get me standing there seemed to make sense. Wow. This guy is pretty amazing. It was a blend of rhythmic beat boxing, flow and performance art. Different than anything I’ve been exposed to before. Personally, I thought the Heatbox was better than the Parliament Funkadelics which seemed to be a bunch of people randomly screaming and dancing to punk psychedelic music on stage. To be fair, everyone there (from the older folks that were out beyond their bedtime to the young kids that had to pay the $3 surcharge if under 21) loved it. There was hardly any “dancing room” available at the Cabooze that night.

Good Tuesday night adventure? Yes, but it would have been cooler if it was a weekend night and I didn’t need to work the next day.