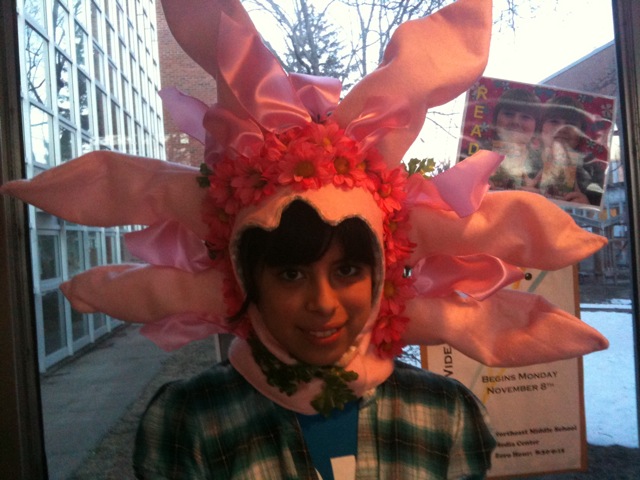 Deborah Martinez models one of the flowers made by her Grandmother Nancy Lindsay.

In today’s world of nonexistent budgets for arts programming in the public schools, it is exciting and a little surprising when you hear about a theater program that is steadily gaining momentum among those who participate and the public who supports them.

Northeast Middle School has had a renaissance lately in their theater program.  The school has performed three annual musicals, with interest rising steadily each year. Last year students performed Seussical Jr. to an enthusiastic public and the anticipation towards this year’s production of Disney’s Alice in Wonderland Jr.is even greater.

According to their Facebook page,  “20% of the student body is participating both onstage and backstage. In just a few years this theater program has become one of the most popular extracurricular activities at Northeast Middle School, eclipsing even Athletics.”

Deborah, one theater participant said of the program, “It’s hard work, but it is worth it. I think all of us in the play feel successful.”

Dudley Voigt, director, has been involved in the after school musical since it began in 2008.

She said that currently 63 students are involved in the production, which is a significant jump from last year.  They are also at a record number of adults helping. In addition to adults who organized their Winter Warm Up Fundraiser, they have had nearly 30 parents working on sets and costumes, marketing and promotions, selling tickets and concessions, and organizing food and transportation for the performers. That doesn’t count the number of NEMS staff who give their time to support the students and program.

“Since January they have been at the theater with their kids helping pull this together,” she said.

The program has to be a self-supporting program and they raise that through the Winter Warm Up Fundraiser, ticket sales, student fees and other efforts.  They are fortunate to be part of the BEACONS program, which along with the school provides some assistance.

Dudley said that as the program grows, they have been able to build their infrastructure while attracting help from parents, staff and community members.

“All our costumes and sets are created by volunteers, and now we’re seeing alumni who had performed return to be involved with the program as highschoolers.  They are coming in with high investment and high expectations!”

Disney’s Alice in Wonderland Jr. is based on the classic Disney movie, not directly on the Lewis Carroll books. The story is only 75 minutes long and can be enjoyed by all ages.

Dudley said that this production promises to be as enjoyable as last year’s Seussical.

“The kids are fabulous! I guarantee the audience will have to remind themselves they are watching 6th, 7th & 8th graders. If you liked Seussical, Jr., you’re going to love the costumes for this show. We have some incredible talent in our community. Plus, don’t you want to see how Alice “falls” into wonderland? Or how she keeps changing size, growing as big as a house, or a tiny 3 inches tall? You’ll have to come see for yourself!”