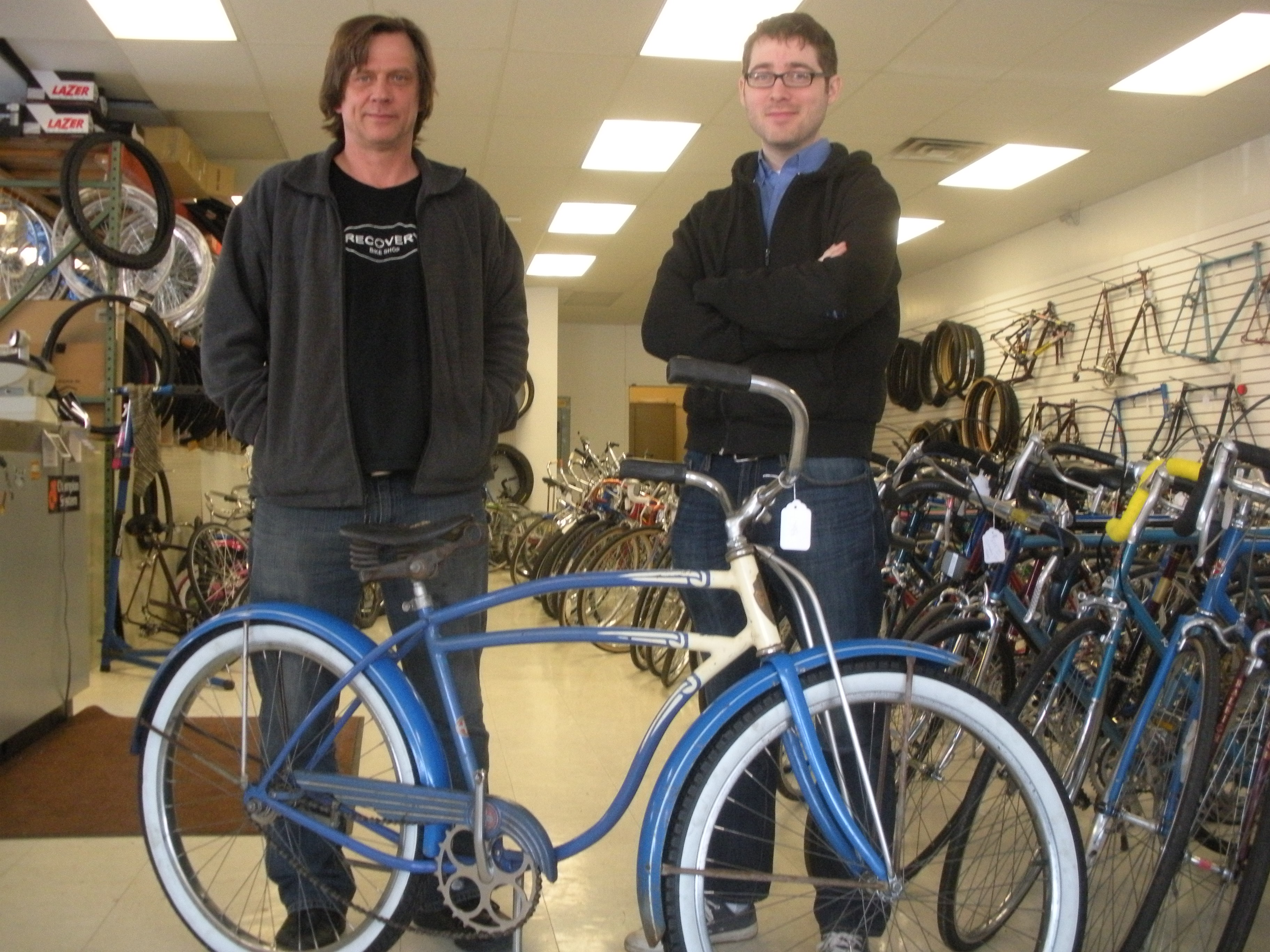 Brent Fuqua and Seth Stattmiller with a 1952 Schwinn Majestic

Gas prices may be back up again but spring has finally arrived.  What better time to look at alternative ways to get around.  And that could be easier than you think if you visit a new bike shop that opened in the neighborhood.  Recovery Bike Shop opened in January at 2555 Central Ave NE, right next to the Eastside Food Co-op, and promises to deliver sales, service and advice to all looking at bicycles as a transportation option.

Founder Brent Fuqua started small almost three years ago when a friend gave him a bike named Sweetie Pie, an old Schwinn cruiser. He looked at it as his “vehicle” for defeating addiction.  After he learned how to work on his own bike, he helped many of his friends who were in recovery, maintain their bikes. His garage became the place where he worked, fixing more and more bikes until it became clear to Brent that it was time to look at this as more than a hobby.

With the help of Windom Park board member, Mike Smieja, Brent created a business plan and located a place to operate his business next to the Eastside Food Co-op.

Brent said the co-op was also instrumental in helping him get his business up and running.

Co-owner, Seth Stattmiller, also teamed up with Brent bringing with him a solid business sense and previous experience working at Re-cycle Bikes.

“We’re really about recycling, ” Brent said. They focus on the urban commuter who uses bikes as transportation.

And as Seth points out, buying a used bike is the best way to reduce your carbon footprint.

In addition to selling used bikes, Recovery Bike Shop can assist you in repairs, tune-ups, parts and even advice on how to fix and maintain your bike.  They hope to offer classes in the future for those wanting to do it themselves.

You can also donate your old bike at any time.

Recovery Bikes receives many of their bikes through donations from the community. But only about one in ten bikes meet their standards and end up for sale at the store. The majority of the bikes are re-donated to other bicycle programs. Damaged frames are scrapped and recycled.

“We do it everyday, anytime, any condition,” Seth said.

Even though it’s a commercial venture for Brent and Seth, their success really comes from the community support that they receive.

Brent is grateful to the Audubon neighborhood for the support they have given him these past few months and since he’s moved in, the feeling has been mutual.  He has heard from several people, “I’m glad you guys are here.”

Seth added that during their Grand Opening, someone went to Holy Land to buy more food to contribute to their celebration.

Recovery Bike Shop has expanded to a full service bike shop but their mission still remains true to their name. They still help those in recovery from alcoholism and addiction get “back on the road one bike at a time.”

“It’s always a joy in finding a right home for a bike. It’s a fun job,” Brent said.

“No other reason to do it,” Seth added.