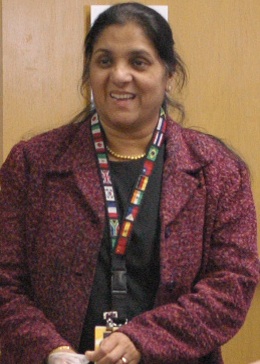 Because of changes at Northeast Middle School made over the years by dedicated teachers, staff. and community members, the school  appears to be moving in the right direction.  You may not have heard about what is happening at the school, but we hope to change that with this column   In each issue, we will highlight some of the people working at NEMS and will run stories by and about students and information about programs and community events.

The Northeast Middle School leader is Dr.  Padmini Udupa. She has served as Principal for four years and held the position of Assistant Principal for several years before that.  Dr. Udupa described some of the positive things happening at NEMS and changes over the years.

Communication – Improvements in communication can be attributed to Joe  Bloedoorn, Jr.,  Community Liaison. He gets the word out to the parents and community on everything from the winter fundraiser to the Spring Wingding.  The website now has photos and events listed regularly, and a weekly e-newsletter goes out to parents and others in the community.  A print newsletter is also published three times a year.

International Baccalaureate Program  (IB)- NEMS is an IB School. The program is dedicated to meeting not only the academic needs of its students but also their social, emotional, physical, and creative-development needs. Students participate in community and service activities and must take three years of a foreign language.

Although the program prepares students for college, it also supports the development of the whole child.  Balance is fundamental.

For the first time this year, NEMS offered a full day of track and field for the whole school.  Students went to Edison field  for the day and received medals and ribbons  “Some kids didn’t take the ribbons off for days. They were so proud.” Udupa said.

The Social Studies department also held a Model U.N. Day.  150 seventh graders participated and represented 43 different countries. Their focus was on food aid. “All students do something unique to their grade,” Udupa explained.

Staff stability has been another asset for NEMS.   “We have been able to keep the momentum going and move forward,” she said.  Staff have been trained in the IB curriculum and are very dedicated. Teachers take it to the next level through such activities as track and field and the Model UN Day.

NEMS has built up its arts program over the past five years. The program started by producing a musical and now has added a fall play. Last year’s Alice in Wonderland drew a record number of 600 people to the performance.  One-fifth of the student body participated in the production, either as performers or backstage. The number of community and parent volunteers who built props, made costumes, and participated in their January fundraiser also set records.

Many of the fifth graders in Pillsbury and Waite Park (NEMS feeder schools) also were able to attend the productions. This provided more opportunities for the community to grow through enhanced relationships.

Udupa said that next year’s musical, Charley & the Chocolate Factory, has already been chosen.

The NEMS band has been more present in the community, as well. They have performed at Waite Park Carnival, Windom Carnival, and the Audubon Spring WingDing. Charles Preis, director of music, is leading this effort.

This past school year, fifth graders from other Northeast schools had the opportunity to shadow a sixth grader at NEMS to learn more about the school.

Now in its third year, the FIG has been instrumental in organizing events and opportunities for NEMS families to help them learn more about the school and their child’s education. FIG wants families to be an active part of the NEMS community.   Before the group’s formation, there had not been a parent group in NEMS for 15 years.

“We need support. We’re all in this together,” Udupa said.

The Beacons, a free after-school program, is the largest site in the city. Half of the NEMS students stay afterschool for programs ranging from debate to leadership.

Udupa said that many of the students want to be part of the school environment and enjoy the programs. This speaks highly for both the school and the community around it.

Udupa thanked the community for supporting the school this past school year, adding, “We have wonderful staff, students, and parents. We can all be partners together to make this a great place.”

“If students are in the hall with smiles on their faces, you got them,” she said.