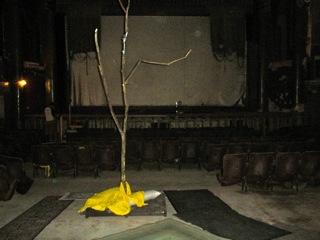 Looking for something different to do this month?  Why not spend a July evening at the Hollywood Theater, viewing Theatre Pro Rata’s production of Waiting for Godot?  The Hollywood Theater, once a vibrant art deco movie theater in Northeast Minneapolis that operated from 1935 to 1987, will once again open its doors temporarily for the production.

Each year, Theatre Pro Rata, (celebrating its 10th season) takes one of its productions on the road. Last year’s production, Traveling Light , was performed in Layman’s Cemetery.

Director, Ryan Ripley, began searching for possible venues for the play, he was looking at forgotten and broken down places.  Several options came to mind like an abandoned warehouse, and an old shopping center. But it was the Hollywood Theater that made the top of his list.  When he approached the city of Minneapolis (who owns the building) with his idea, they were all for it.

“They said let’s make it happen. Let’s do it,” Ripley said.

“There has been a lot of interest in the play.  We have a really good cast. There’s also a lot of intrigue about how we are using the theater,” he said.

Ripley said that staging a play in a vacant theater has been a challenge. The play is set in a timeless and strange world.  It calls for a very simple set design requiring only a tree and a mound. He wanted the audience to be close enough to the stage yet to also feel the space and emptiness of the theater around them.

The audience will be seated in a mishmash of chairs circling around a thrust-like stage stationed in the middle of the theater.  Some of the original Hollywood seats may also be used.

Other challenges they’ve had to face include having no access to running water, electricity, and bathrooms.

Ripley said they are operating everything on two different outlet boxes. Clip lights have been strung along the walls.  Portable toilets will also be available across the street.

The city has worked with Theatre Pro Rata from the beginning to make it successful including ensuring safety. Because the theater does not have an operating sprinkler system, an off duty firefighter will be present during all performances.  Emergency exit signs have also been installed.

But what minimal amenities there are in the theater also lend itself quite well to the aesthetics of the production.

Samuel Beckett ‘s first professionally produced play, Waiting for Godot opened in Paris in 1953. The simple story evolves around two homeless men, Vladimir and Estragon, who wait near a tree on a barren road for someone named Godot.  The play’s meaning goes far beyond its simplistic plot. It has been described as minimalism capturing the existentialism of post-World War II Europe.

Although the play is often referred to as a tragic comedy, Ripley said he will highlight the comedy.

“There is a lot of vaudeville influence in it,” he said.

‘Many people have a lot of notions and perceptions that the play is dense,” he said. He hopes that people will not feel this is a dark play and will come with an open mind.

“There are moments that get really dark and then it gets really funny,” he said.

It’s an intimate play, emphasizing the humanity. He hopes the audience will recognize the struggle the characters are going through.

Although there will be no concessions during the performance, Ripley hopes that people will spend time afterwards in the neighborhood discussing the play.

“It doesn’t have to be that complex. Everyone is going to have a theory about what is going on.,“ and adds,  “Northeast is such a great artistic community anyway.”