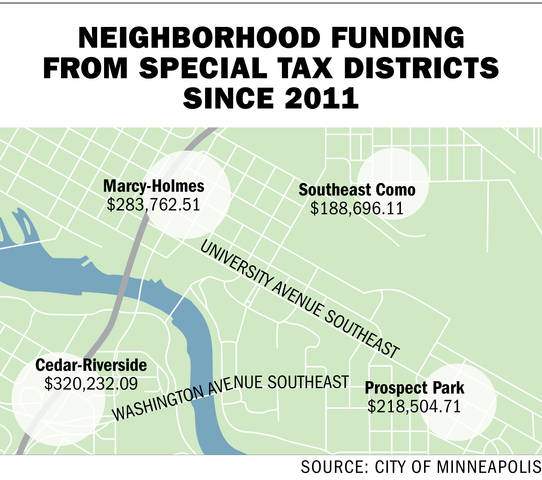 Neighborhood groups in the University of Minnesota community are up in arms over Minneapolis Mayor Betsy Hodges’ proposal to put a traditional source of their funding to different uses.

For years, revenue from special taxing districts in downtown Minneapolis has been split between the Target Center debt and the city’s 70 neighborhoods. But Hodges’ proposed budget sets aside some of the funds for new endeavors, like redeveloping a barge terminal in north Minneapolis and hiring a neighborhood specialist and two communications specialists.

City leaders say the new projects would draw on funding from an increase in taxing district revenue — finance officials expect an additional $1 million in each of the next few years because of increasing property values downtown. Neighborhood groups already have about $16 million that hasn’t been allocated to projects, and city officials expect this pool to grow as more money from neighborhood investments pours in.

The Marcy-Holmes Neighborhood Association, which has received about $284,000 in special district revenue since 2011, sent a letter of protest on Tuesday stating the organization’s opposition to the mayor’s plan. The group sent the note to a member of the city’s Neighborhood and Community Engagement Commission, a group of elected and appointed neighborhood representatives that advise Hodges and the City Council.

“We hope they change their mind,” said Melissa Bean, executive director of the Marcy-Holmes Neighborhood Association.

The tax districts’ revenue that has traditionally gone to neighborhood groups is designed to cover “neighborhood revitalization” — the definition of which is vague to some, said Sandy Christensen, Minneapolis’ deputy chief financial officer.

But some elected officials said the change wouldn’t take money from neighborhood groups.

“Neighborhood associations are not — with a capital ‘N’ — being defunded,” said Ward 3 City Councilman Jacob Frey, who represents neighborhoods near the University.

Funding that the budget proposal doesn’t allocate to neighborhood groups could be used for essential city services, Frey said, like road repair and affordable
housing.

The proposed budget would increase neighborhood funding to cover inflation but do little more, said Phill Kelly, interim executive director of the West Bank Community Coalition, the local organization for the Cedar-Riverside neighborhood.

Kelly said his neighborhood’s association, which has received about $320,000 since 2011, is well-funded, but only from an administrative point of view.

The group can pay for staff members and office supplies but doesn’t have enough to support youth programs and activities, he said.

Southeast Como’s neighborhood organization, which has received about $189,000 in the last three years, is watching the city’s funding discussion with bated breath, said Stephanie Hankerson, a community organizer for the Southeast Como Improvement Association.

“We’re operating with near shortfalls, whether it’s programs or our office,” she said. “We’re concerned.”

The University of Minnesota area has received about $139,000 since 2011, but the area doesn’t have a neighborhood association. The City Council’s Ways and Means Committee approved a plan earlier this month that would reallocate unused money for the area to another neighborhood.

Although there are no official plans for millions of neighborhood group dollars, it doesn’t mean those funds will go unused, Neighborhood and Community Relations Director David Rubedor said at a city commission meeting Tuesday.

Several neighborhood organizations are planning to use their unallocated funds, Rubedor said, pointing to Southeast Como’s proposal to apply about $20,000 to homebuyer assistance.

A City Council committee will discuss Hodges’ plan for neighborhood funding at a meeting Nov. 3.