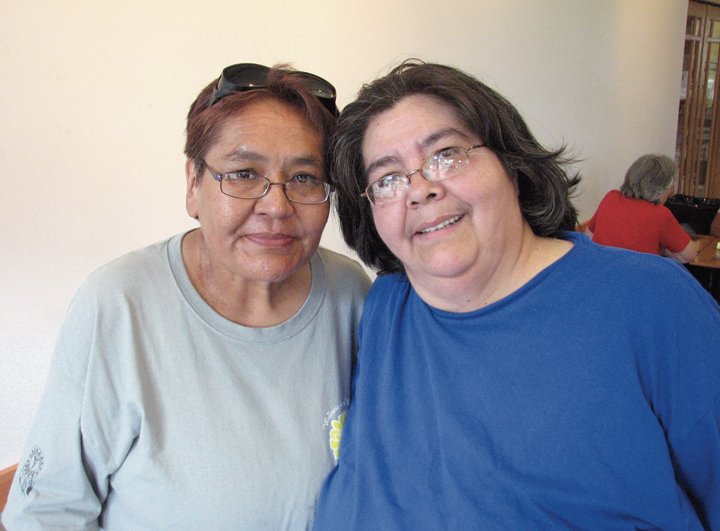 Members of the Minneapolis Two Spirit Society are celebrating along with other LGBT (Lesbian/ Gay/Bisexual/Transgender) Minnesotans and preparing for the state’s Freedom To Marry law which takes effect August 1st.

Sue GoodStar and her soon-to-be wife, Cherilyn Johns, were overwhelmed when news first broke in May that the legislature had passed the marriage equality bill. “I was crying. We were going to go down to Des Moines to get married but something told me to wait,” GoodStar said. The two have been together for 13 years and have always been out to their families.

GoodStar, who is Dakota from Sisseton-Wahpeton, said her tribe and family are generally supportive when she is confronted with any kind of discrimination. “People would try to make comments while I was home, but my cousin Chuck would say, ‘This one’s special, leave her alone.’ I asked him what he meant by that and he said, ‘I say that because you’re winkte, they’re powerful people.’” In Dakota and Lakota, the term “winkte” is a contracted form of the word “Winyanktehca” meaning “to be as a woman” and previously applied – disparagingly – to gay men or transgender women in Dakota and Lakota society. Activists and allies have recently reclaimed it to reflect its traditional roots on the larger LGBT Dakota and Lakota community.

But for many, the term Two Spirit is a recent addition to bring LGBT Natives into a larger community. It was adopted in 1990 during the International Two Spirit Gathering. It was adopted from the Ojibwe term, “Niizh manidoowag” meaning Two Spirit. For those in the community, it’s also a holistic term that may not follow mainstream LGBT roles where sexuality and gender may be separate or highly compartmentalized.

In Zuni tradition, it is known as “Lhamana,” wherein a person lives as both genders at the same time. Their role in society was also a place of esteem, serving as mediators, priests and artists; while practicing pottery, crafts, or hunting.

Similarly in Navajo culture, “Nadleehi” refers to that culture’s biologically male-born person with both masculine and feminine attributes. For female-born persons with a more masculine spirit, the term applied is “Dibaa.” Both are thought to encompass both genders in one person.

Unfortunately, for some LGBT Native people, their cultures have not always been as traditional or welcoming as they once were. In June of 2001, Fred Martinez – a 16-year-old Navajo high school student who self-identified as nadleehi – was killed in Cortez, CO. He was killed by Shaun Murphy, a Farmington, NM resident who bragged he had, “beat up a fag.” The murder brought to light the traditional roles of LGBT Natives in their societies and cultures and launched a 2009 PBS documentary about the incident and identity called, “Two Spirits.”

Since then, both Johns and GoodStar have noted a more accepting atmosphere of the Two Spirit identity. “Everyone has Two Spirit recognition. Back home, my family accepts me and my partner. As long as I’m happy, they’re happy,” Johns said. “We’re going to be more recognized as a legal couple.”

Through the struggle for marriage equality across the country, there have only been a handful of tribal nations that have even broached the subject. In 2004, the first to address the issue was the Cherokee Nation Tribal Council. On June 14, the council voted to officially ban marriage for gays and lesbians by defining its statutes as a union between a woman and a man. The vote was a response to a lesbian couple who had applied for a marriage license. At the time, tribal attorneys cited the tribe’s marriage reciprocal recognition with the state of Oklahoma – where marriage equality was banned.

In addition, the Iowa Tribe of Oklahoma and Muskogee Creek Nation outlawed marriage for gays and lesbians the same year.

Another blow to the marriage equality movement for the Two Spirit community came in 2005 by the Navajo Nation. Despite their culture’s traditional recognition of LGBT couples, the council of the country’s largest reservation – covering Arizona, Colorado, New Mexico and Utah – voted to ban marriage for its Two Spirit citizens in 2005, with an amendment to its tribal constitution. Then President Joe Shirley, Jr. vetoed the legislation but the council overrode his objection.

The tide began to turn for Two Spirit couples on the reservations beginning in 2008 when the Coquille Tribe in Oregon legalized marriage for all its citizens, regardless of sexual orientation. At the time Ken Tanner, Chief of the Coquille (not the Chairperson), said to the reporters that Native Americans are, “sensitive to discrimination of any kind. For our tribe, we want people to walk in the shoes of other people and learn to respect differences. Through that, we think we build a stronger community.”

Again, in 2011, the Suquamish Tribe in Washington state joined the Coquille in welcoming its Two Spirit citizens by legalizing marriage for them. Both tribes’ statutes require that at least one partner is a tribal citizen.

This year, three tribes also enacted similar marriage laws. The Little Traverse Bay Bands of Odawa Indians, the Pokagon Band of Potawatomi Indians, both in Michigan, and the Santa Ysabel Tribe in California, brought the national number of tribes to adopt marriage equality to five. A handful of tribes in South Dakota have also had statutes known as domestic ordinances that do not specify those who cohabit based on sex, but are geared toward domestic violence protections and are not specific to marriage law.

When it comes to marriage equality for the Sisseton-Wahpeton Oyate (SWO), GoodStar’s home reservation, she is unsure if any LGBT advocates are working to improve the law, but holds out hope. “If they did recognize it that would be wonderful because I know a lot of Two Spirits from back home. Some are out and others are still in the closet.” If SWO were to legalize marriage, she said she would be willing to return home. “I might want to go back and renew our vows for those who can’t make it here in October.”