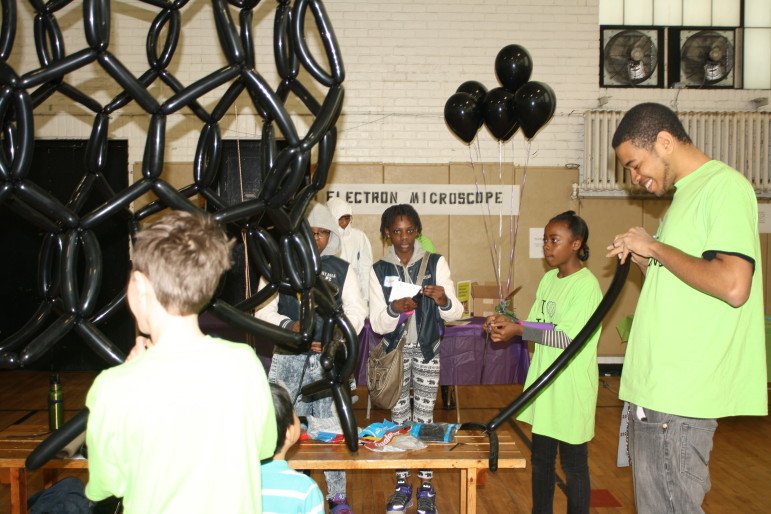 On Saturday, April 4, 2015, the Sabathani Community Center, in collaboration with the Bakken Museum, the Science Museum, the University of Minnesota, and S.E.L.F. International, Inc., hosted the fourth annual Nano Days. By definition, a nano is one one-billionth of something.

For example, a nano meter is one-billionth of a meter and is so small that it can’t be seen on a macro scale. It requires a nanoscale to be seen. Scientists must use special tools when working with atoms and molecules at the nanoscale. Nano research is leading to new technologies that are dramatically changing and improving modern medicine, computers, cell phones, energy production and manufacturing. In fact, one demonstration during the Nano Days event showcased a waterproof, stain-resistant material used to make khaki pants and rain coats. The material actually repels ink, water, food, or whatever else you throw on it.

The volunteers giving the demonstration were asked about the washing instructions and if sweat was on the list of liquids the material repels, as well as if this means the clothing is free from having odor build-up. The answer was “most likely,” but they declared immunity under the guise of being volunteers, not scientists.

Close to 200 people attended the event this year, the majority of them school-age students. Sabathani Community Center provided free food and drinks, and there were about 14 different stations offering a variety of demonstrations.

Nyels Carpenter was one of the volunteers leading a demonstration with thin black balloons. The balloons were twisted together in the form of a hexagon shape. The MSR spoke with Carpenter (NC), a 21-year-old student, about his presentation.

MSR: What can you tell me about your demonstration?

NC: Diamonds have this strong hexagonal shape, which means their atoms cause a six-sided shape. Scientists have figured out how to make graphite and cut that down to grapheme, which is one atom — think of that — then form it into this hexagonal shape so that it’s really strong.

NC: It creates nano tubes. Now what they can do with nano tubes is create small, thin, and very strong objects. It’s also good at conducting electricit,y and it’s stronger than steel. So there are a lot of uses for it.

MSR: So what do you do besides volunteer at Nano Days?

NC: I’m a student at the University of Minnesota and I help out downstairs at the childcare center.

MSR: How did you learn so much about nano science?

NC: Well, I study about it at college and [I did] some study on my own so I would be prepared for today.

Earlier, before anyone attended the Nano Days event, Bonnie Everts, who is the executive director and founder of S.E.L.F., which stands for Science, Education, Literacy and Fine Arts, conducted volunteer training and later worked a demonstration table. According to Everts, she refers to the Nano Days events as a mobile science lab.

“Those are the people that don’t go to the Science Museum. We are trying to equalize the playing field and close the achievement gap by bringing the materials to the people,” says Everts.

Everts says that the ultimate goal is to see some of the young people from the underserved populations find careers in STEM. Everts shares a final thought, a quote from a nano scientist: “‘Nano will change the 21st century as much as the computer changed the 20th century.’”

If you are interested in learning more about Nano Days or nano science and technology, go towww.whatisnano.org.