UPDATED 11/24/2010—Standing atop the I-394 bridge which leads to Ramp C in downtown Minneapolis, one thing is chillingly obvious about this 70-foot drop: If you jump over the concrete barrier, you will die.

Although there is no path for pedestrians, this area of the ramp is flooded with good lighting and plenty of safety barriers to prevent an accidental fall.

Yet, this is the exact location where police say 29-year-old Jason Yang “jumped to his death” in the early morning hours of Saturday, November 13 while trying to elude police who were chasing him on foot for three city blocks in downtown Minneapolis and into Ramp C.

“During the foot chase [suspect] jumped from a bridge and was pronounced DOA by paramedics,” the two-sentence official police report said of Jason’s death.

Minneapolis police spokesperson, Sgt. William Palmer told KSTP-TV news that, “As soon as he got past that cyclone fencing, he vaulted the barrier and fell about 70 feet. We had 5 officers in close proximity to the suspect when he jumped. We had not yet caught up to him. Nobody had even touched him.”

For those who know Jason, however, the version of Jason’s death documented by police does not sit well, especially when considering the full extent of Jason’s life accomplishments and his larger-than-life personality. 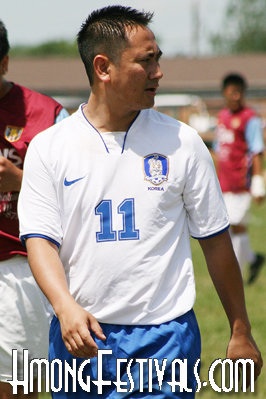 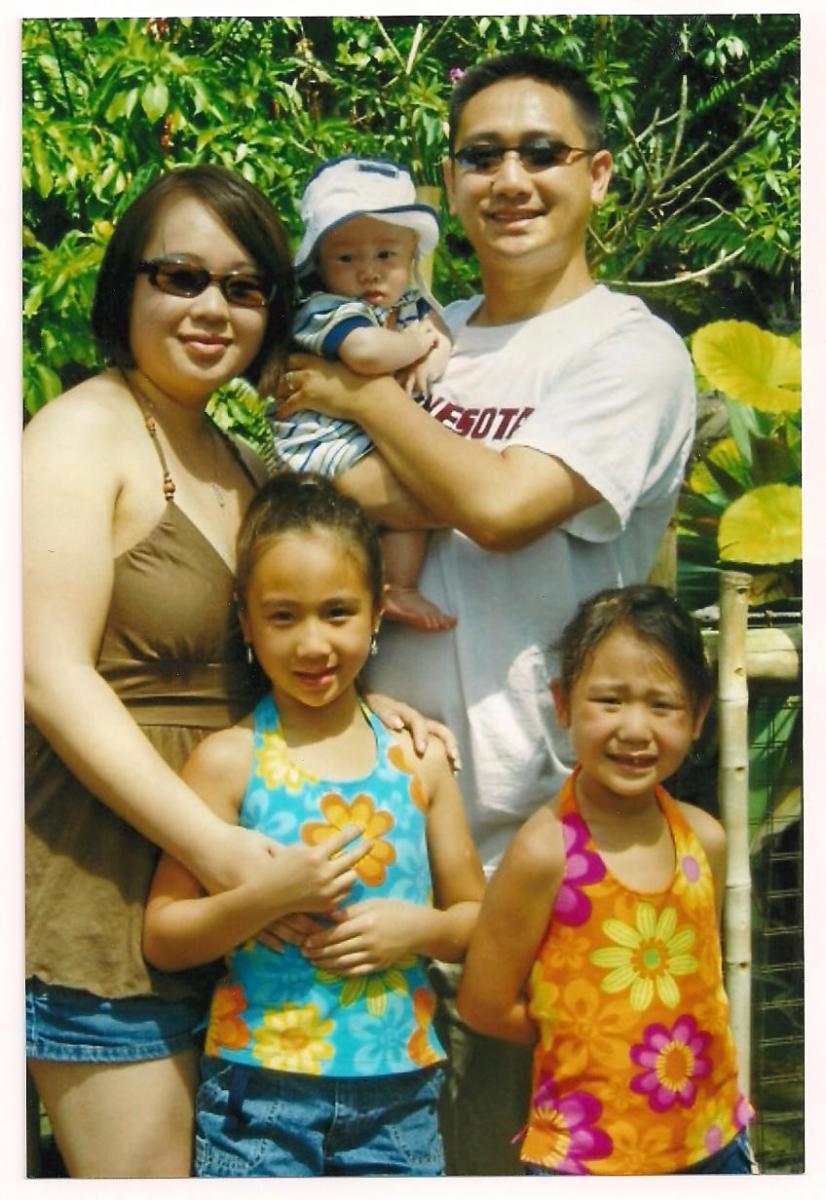 He was an All-Conference soccer player who played four years of varsity soccer at St. Paul Central High School. To better his life, Jason earned a bachelor’s degree from Northwestern College even while working full-time at Capital Bank, where he would rise from being a bank teller all the way to being an Assistant Vice-President. And above all, he was a loving father of four young children and devoted husband to his high school sweetheart, now his wife of 13 years.

To put it in the words of Jason’s 27-year-old brother John Yang, “Jason was excellent at everything he touched. There’s absolutely no way he would misjudge a fall such as that. He had everything to live for.”

Knowing Jason’s background, the basic-yet pivotal-question needs to be asked: “Why would Jason jump an obvious fall to his death when he had so much going for him?”

When we dug deeper into this mystery, we discovered that a growing list of other concerns have emerged since Jason’s death. At this point, these concerns have snowballed into an avalanche of doubt, fear and mistrust by those who have closely followed the life and death of Jason Yang.

The trail of suspicion began on the morning of Jason’s death when family members arrived at the scene where police say Jason died.

“There were no police markings, no tape, no police to guard the area,” said John. “The only thing we found was a pool of blood where my brother’s body supposedly hit the ground a few hours earlier.”

From there, the suspicion and mistrust continued to grow when the Hennepin County Medical Examiner’s office persisted in rejecting the family’s request to see their loved one’s body.

“They kept telling me that they didn’t have visitation hours and that they had used Jason’s driver’s license to identify the body,” explained Jason’s wife, Mee Yang. “They tried everything in their power to stop us from seeing his body.”

It would take nearly an entire week after Jason’s death and a court order which was fought vigorously by the ME’s office before the family was allowed to view Jason’s body.

“After we saw the body, it became very clear why they were trying so hard to hide Jason’s body from us,” said Mee and John. 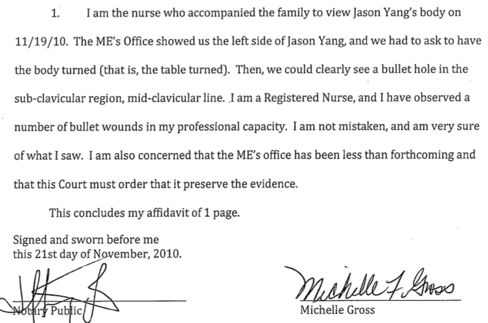 According to affidavits filed in court, all three individuals who were allowed to view Jason’s body came to the same conclusion: There was a bullet hole in Jason’s body!

“We could clearly see a bullet hole in the sub-clavicular region, mid-clavicular line [shoulder area],” testified Michelle Gross, a trained nurse and also an advocate for victims of police brutality. “I have observed a number of bullet wounds in my professional capacity. I am not mistaken, and am very sure of what I saw.”

Beyond what is written in their affidavits, the family is declining to say anything further about the extent of the wounds found on Jason until an independent autopsy is completed. [Affidavits attached below as pdf.]

“All I can say is that what I saw today absolutely does not match what has been previously reported by the police,” Gross carefully added. “Let’s just say there is a reason the Medical Examiner and the police have not been very cooperative with the family thus far.”

Citing a need to “correct the public record”, Chief Medical Examiner Andrew Baker, M.D., of the Hennepin County M.E.’s office received court permission to publicly disclose the autopsy in which he testified the “cause of Mr. Yang’s death was blunt force trauma. The manner of death was accident.”

Directly responding to the allegations that Jason may have been shot, Baker goes on to describe the “skin defect” at Jason’s clavicle to be caused by “fractured bone” which punctured his skin.

“There is no bullet wound on Jason Yang’s body,” Baker insists in his court entered affidavit. “What Ms. Yang, Mr. Yang, and Ms. Gross observed was a skin defect caused by Mr. Yang’s broken clavicle.”

At the press conference, Baker commented further that all of Jason’s injuries were consistent with a man who had fallen 40-feet onto asphalt, as police say he did.
Other injuries the M.E. listed were multiple blunt force injuries that he “suffered in a fall” including skull fractures, 10 rib fractures, and a list of internal injuries focused on the right side of Jason’s body, including a lacerated right lung.While police reports indicate that Jason “jumped” over the barrier at his own doing, there is no mention in the autopsy of any broken bones in any of Jason’s lower extremities such as his legs, feet, ankles or knees.

In fact, other than a few prior scars on Jason’s knees and foot, it is noted in the autopsy that “the long bones are free of palpable fracture.”

If he fell on his side as the autopsy suggests, then Jason apparently didn’t try to break his fall by using either his arms or hands because other than a few small markings, his hands and arms were intact.

In response to the M.E.’s revelations, the family is confident that their independent autopsy will produce some answers they are seeking.

In response to allegations that the police shot Jason while chasing him, Chief Tim Dolan released an official statement to the media in which he steadfastly defends his officers:

“The Minneapolis Police Homicide Unit has substantially concluded its investigation into the falling death of Mr. Yang. The video evidence from the ramp supports officers’ statements and radio transmissions. The reality is that there were no shots fired by officers and there was absolutely no physical contact by officers with Mr. Yang between the time that Mr. Yang participated in an assault on officers until officers gave first aid after Mr. Yang’s fatal fall.”

The Chief went on to blame Michelle Gross and her organization, Communities United Against Police Brutality (though not including names in the statement) for the family’s misdirected concerns.

“We recognize the family is dealing with the loss of their loved one; it is irresponsible for some individuals to lead a grieving family into believing these false accusations. These individuals have long been self-serving charlatans who have little regard for the truth or the harm they can do to a community. The officers involved in this incident deserve the full support of the people of Minneapolis.”

The “video evidence” that Chief Dolan prominently mentions in support of his officers’ statements could be the other key to solving this ongoing mystery. To date, the police have not released any video footage from that night to the public or to the family.

While there are dozens of video surveillance cameras littered along the path which Jason ran, including cameras at Epic Nightclub where this incident began, it is interesting to note that while standing at the exact spot where police say Jason jumped, we were not able to discover any visible video cameras in that immediate area.

The lack of cameras in that area is supported by both the MDOT’s website and the Minneapoils Surveillance Camera Project’s map. In both maps, cameras are situated blocks away from the scene.

There are, however, plenty of cameras within the parking garage. When a parking lot manager was asked about the cameras, his automatic response was to contact the police who “collected the footage immediately after the incident.”

Of the three officers who were named in the police reports connected to Jason Yang’s death, it should be noted that two of them have been extensively investigated for some manner of wrong doing or complaint filed by citizens.

According to the Civilian Review Authority’s database, Officer Adam Lewis has a total of 13 infractions which were investigated, including one “Reprimand for Excessive Force” and one case which is currently being investigated by the Internal Affairs.

Officer Douglas Dubay has 11 cases noted by the CRA and 3 cases which were investigated by Internal Affairs. Specifics of their possible infractions are not listed.

These officers are mentioned in the police report on the fight outside Epic Night Club, during which police say Jason was one of the suspects who assaulted them.

Eye witnesses to this chaotic event say, however, that contrary to media reports, the only fight at Epic that night was between bouncers, police and the patrons as they spilled out of the nightclub.

“It was absolutely the police who indiscriminately sprayed mace, kicked and punched innocent bystanders and provoked the chaos that occurred outside of Epic,” said one witness who sought safety from across the street while the scrum took place in front of the nightclub.

When some in the crowd began fighting back to protect themselves, a number of different witnesses that placed Jason in the middle of the crossfire of fists and kicks.

Eyewitnesses (who, fearing for their safety, spoke on condition of remaining anonymous) say this is when they saw two officers chase Jason towards the garage. Within minutes, witnesses then saw a squad car along with other officers following suit.

“This entire ordeal could have been prevented if the bouncers and the police could have just treated the patrons with a little respect and dignity,” said one observer. “Instead, it was the police who kept attacking everybody and anybody they could get their hands on-even females who were in that area got maced and pushed down to the ground.”

Although police say they have been investigating Jason’s death and the fight that sparked the foot chase between police and Jason, not one person has been arrested or even questioned from that night.

One witness, who may have been the last friend to have seen Jason alive, said he saw Jason running past while the witness was inside the parking ramp elevator.

“I saw Jason running past the elevator, but the door closed before I could see anybody chasing him,” said the witness.

He, along with a number of Jason’s other friends, stayed inside the parking ramp well past 3:00 a.m. and none of them saw, heard or even were aware of police vehicles or an ambulance in that area.

“We were right in the garage during the time when police say Jason jumped off that bridge,” said one witness who stayed around to gather friends and to organize rides after the chaos that occurred outside of Epic. “But that entire time, we didn’t notice any lights or sound indicating anything was wrong in that area.”

Like other pieces of evidence, ambulance and EMS records are currently being requested.

“I cannot breathe,” concluded Mee, the bereaved widow. “I just can’t breathe until I know the truth of what happened to Jason that night. Until then, I can’t breathe.”