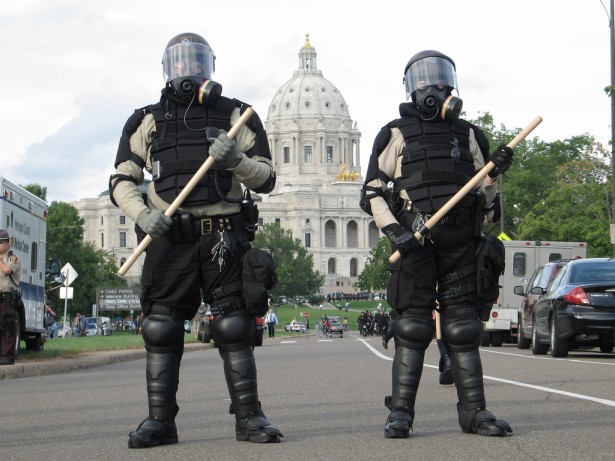 It was Tuesday in Mears Park, the second day of the Republican National Convention (RNC). We had already marched on Monday as part of the crowd of 10,000 protesting everything from the war in Iraq to the presence of Ethiopian troops in Mogadishu. Being part of a large group like that, you tend to only see and hear those things in your immediate area. But someone mentioned that they heard a cop say there had already been tear gas used farther downtown.

Immediately, rumors and opinions began circulating about police violence and innocent protestors being beaten up. It was only later that we would learn of smashed windows, vandalized police cars, bags of feces, and all the mayhem that goes with unchecked street violence hiding behind legitimate political protest. Whether you believed it was the fault of a few rowdies or the end result of a stifling police presence, it was clear by Monday night that we had trouble right here in River City.

Tuesday promised another march, this time focusing on domestic needs such as hunger, homelessness, and education. Everybody, and I mean everybody, expected more problems similar to the ones we had seen on Monday. My wife and I sat on one of the small hills overlooking the Mears Park pavilion, watching the crowd grow, and just generally checking out the scene. Then I saw them.

A few feet off to our left, we spotted three young people, girls, each one wearing the stereotypical “uniform” of the anarchist troublemaker: dark clothes, baseball caps, bandanas around their necks easily pulled up to cover their faces, eye goggles at the ready to protect them from Mace and tear gas. And finally, each one had a sinister-looking rucksack, which I was sure was full of stones and debris for the coming battle. They were all unsmiling and clearly on edge. If ever there was a central casting image of a troublemaker, this was it.

After a while of people just milling about, my wife noticed a growing commotion at the corner of Wacouta and Fifth streets. We joined the crowd and headed that way. In the middle of the intersection, the police, fully clad in riot gear, were attempting to move people from the street back to the sidewalk. I was struck by the fact that there weren’t that many police and they were quickly surrounded on all four sides by people. Most folks left the intersection, but one man refused. I should say he moved, but in a clearly unwilling, surly, and defiant way. Not to mention he moved toward the center of the intersection, not away from it. Finally, after the guy bumped into a police horse, the cops had had enough. He was pushed to the ground, put on his stomach and cuffed with a pair of flexi-cuffs.

Naturally, the crowd began a chorus of boos and chants: “The whole world is watching,” “Stop beating that man,” “He didn’t do anything,” and so on. The crowd began to press in until one cop raised a high-powered tear gas sprayer and another brought a bean-bag gun to his shoulder.

Then I saw the three girls I had seen earlier in the park. They pulled their eye goggles up and raised the kerchiefs around their mouths. “Okay, here we go,” I thought. They each put on pairs of sterile latex gloves. “Well, that’s different, but probably something to do with finger prints,” I surmised. Then they reached into the suspicious rucksacks they carried – and pulled out bottles of water. It dawned on me like the proverbial light bulb: They weren’t the troublemakers I supposed. They were there to give first aid to anyone hit with the tear gas. The water would soothe the pain and clear the eyes. The latex gloves were simple precautions in a world full of potential dangers from human fluids. They were prepared to put themselves at risk in order to help others.

But my attention was soon drawn away to a few feet farther up the sidewalk. People were yelling, and I could see a body lying in the gutter. The police, although looking menacing and no doubt ready for whatever action they needed to take, had done nothing more than hold their ground. By the time my wife and I got to the spot, we saw more volunteer medics in a semicircle, holding hands and keeping the crowd back, while other medics tended to the man in the gutter. There was considerable blood around his head.

“What happened?” I quickly asked. One of the volunteers replied, “A man standing by the truck had a seizure and hit his head on the curb when he fell. There’s an ambulance on the way.”

I tried to ask her who she was and who organized this medical aid. But the crush of people made talking impossible.