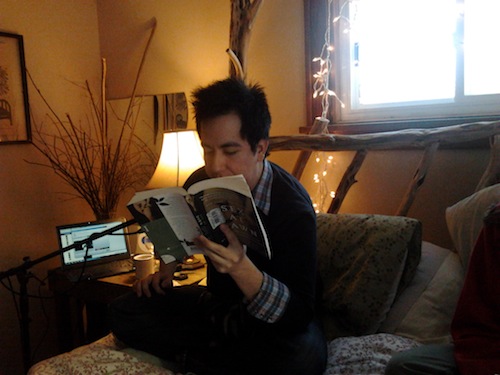 So I got a Facebook invitation, and the title of the invitation was “Sex at Dawn at Dawn.”  Not knowing that there was a popular science book with that title, I read with curiosity the rest of what the invitation said.

“Reading Outloud from the book people have been talking about (but I haven’t read yet), having some breakfast, getting ready to meet the day.” The event was to take place at 7 a.m. each morning for a week, and it was to take place at the following address: “Tree Bed at John and Nancy’s place,” followed by the home address of Bedlam Theatre executive director John Bueche and his girlfriend, Nancy Waldoch.

After figuring out, through later posts, that what the event would entail was a reading of this popular book on John and Nancy’s bed in their apartment, and that certain people would be assigned readers, and that breakfast would be served, I thought it was too strange an opportunity to pass up.

I signed to up to be a reader on March 22, which was the last scheduled day, and I arrived at 6:50 a.m. The invitation had said that “doors” were open at 6:30, but I figured if I got there ten minutes early, that would be enough time to have some coffee and whatever breakfast there was before it started. I also brought with me the ingredients for mimosas, by way of contribution.

The lights were off in the house, and no one answered the door at first. When, after the second ring, Bueche opened the door, it was clear to me that I had woken them up. Panic set in that I was the only person who showed up, but he reassured me that everyone else was just late. “The start time has gotten more relaxed as the week has progressed,” he said.

A little while later the next two guests arrived: a young theater person named Chris Garza and another person, who apparently saw the event listed on a local neighborhood forum.

By this time, Bueche and Nancy seemed to be starting on breakfast. After introductions and some casual chit-chat, Nancy suggested that we get started. So Chris, the other guy, and I all went into the bedroom and sat on the bed, and Chris and I began to start reading.

There were two microphones set up on either side of the bed for the readers, and chairs along the walls, although the hosts pretty much stayed in the kitchen as we read. We began reading a section about female orgasms and how turn-of-the-century doctors would “cure” women of hysteria by basically making them come.

In the parts of the book that I read, the book seemed to be advocating against monogyny, and fluctuated among historical, sociological, and anthropological analyses. We stopped a few times with our reading to talk about the book’s clear heteronormative and Eurocentric point of view, and then continued reading. Nancy brought us coffee, and Bueche brought us jerk pork, which he put on a plate in the bed, and at some point I realized the whole thing was being streamed online.

Eventually, Samantha Johns and Paige Collette, two other theater artists who often collaborate with Bedlam, showed up. They also didn’t come into the bedroom, but hung out in the kitchen. The mimosas were a big hit with the other guests.

I couldn’t figure out what the point of the microphones was—they didn’t seem to be amplifying my voice—until the third visitor who found out about the event through the neighborhood forum took over reading for me, and I went into the kitchen to realize that the microphones were hooked up to the sound system, and the book could be heard throughout the apartment (as well as on the Internet).

The readers took a break, we had some more coffee and mimosas, and talked about the book and about society’s views about sex. We engaged with social media to let the world know we were doing this.

At 8:30, Bueche had to leave for work. He said we were welcome to stay. Apparently, throughout the week the reading has gone on until noon, long after the hosts left.

I left too; I had to work as well. I realized a couple of hours later that what I had experienced was actually kind of the sequel to “Pancake Time,” another breakfast event—although at a slightly more reasonable hour—that occurred in response to Bryan Bevell’s article in the Star Tribune about Twin Cities theater being boring. His argument enraged some and was embraced by others, and a very long discussion happened on Facebook and led to a bunch of theater people getting together at Bedlam to talk about theater.

There were actually two Pancake Time events that I went to, the first having relatively no structure (just people talking at tables and eating pancakes) and the second with some structure (people could write their thoughts on pieces of paper and tape them to a wall, also while eating pancakes).

“Sex at Dawn at Dawn” reminded me of Pancake Time (besides the obvious similarity of both taking place over breakfast) in its purposeful ambiguousness. In both cases there were no set rules or schedule, just a general idea that there would be a topic (the topic of theater in the one case and topic of sexuality in the other) and that there would be socializing and food and discussion in no particular order. Though John Bueche was the official host of the book reading, I also credit Samantha Johns and Paige Collete (who along with Theatre Novi Most’s Lisa Channer started the online discussion that led to Pancake Time) for being instrumental in creating a particular vibe of “I don’t know what’s going on, but that’s okay, let’s just see where this takes us.”

The whole experience made me think about two things. It reminded me how vital it is to break up your routine. I used to have a teacher who would encourage us to aim to do things in the opposite way that you’re used to (like, crossing your legs the opposite way as your used to) because just simple acts of doing things differently can cause you to look at the world in a different way than you did before. For me, getting up so early (I usually go to bed around 3 a.m., so it was like getting up in the middle of night for me) totally threw me into an alternate head space. I think it’s good to do that every once in a while: just completely break up your usual schedule and see what happens.

I also got from the experience how important conversation is in our lives. So much of my discussions about anything political or philosophical happen through writing, whether I’m writing arguments in a written piece or I’m talking with people on social media. I rarely have “serious” discussions with people in person, and while the Sex at Dawn event wasn’t pretentious or super serious, I would characterize it as earnest.

My mom always went to book club when I was growing up; I believe she still does. It was never something that occurred to me as something that I would want to do. I think I changed my mind about that today. Humans have a need, I think, to process thoughts together. Sure, we can think alone, but there’s something that happens when you get a chance to respond to something, to think, as a group that is highly fulfilling.