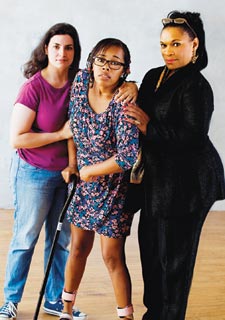 A 24-year-old white woman wants to adopt a black, childlike, 17-year-old girl with cerebral palsy. Her chances seem pretty slim because a well-to-do mature black woman also wants the teen. Add a struggling young lawyer with problems at home with her mate and you have “My Secret Language of Wishes,” an all-woman play at Mixed Blood Theatre in November.

The compelling six-character play touches on themes of love, forgiveness and redemption.

New York City playwright Cori Thomas said her inspiration for the work came from an incident she could not get out of her mind. “I was walking through Times Square subway station and I saw this severely disabled black girl with a white girl not much older taking care of her. At first I thought it was a group outing, but then I realized they were alone. There was something so compelling about them. The image of them kept returning to me.”

This kernel of an idea blossomed into the first draft of “My Secret Language of Wishes” in 2005.

Thomas might be called an accidental playwright. She owes her success in the field to a difficult custody battle with her ex-husband over her daughter. Thomas had been an actor but gave up that career to counter the argument that the travel involved with acting made her the less stable parent. “I got a ‘real’ job as a personal shopper at FAO Schwarz,” but the tug of the theater remained strong. “Theater was a language I spoke. I always loved to write and got good grades in my writing classes,” so it was a natural progression to playwriting. “It was a choice that had to be made, and because of that life became different for the better.”

Although “My Secret Language of Wishes” has an all-woman cast, “I didn’t deliberately set out to do that,” Thomas said. “It’s just that there is a lot of female subject matter. There’s a lot of estrogen in that.” The play examines the notion of family as people who love each other. “It’s not so much about blood ties,” she said. “It will also challenge the audience to examine their own feelings about tough issues: race, sexual orientation, classism.”

The production is part of Mixed Blood’s Center of the Margins Festival which explores the complex world of disability. “This is a minority not usually heard,” said Brittany Bradford, who plays Rose, the young woman with cerebral palsy. “I feel a huge responsibility in playing this character,” she said, wanting to present an honest, non-mocking portrayal.

Connecting with the audience emotionally will be easy, Bradford said. The sweet, naïve Rose “is the embodiment of love. Anyone can connect with how Rose feels.”

Brenda is the character that you’ll love to hate-initially. The wealthy woman who also wants to adopt Rose is played by veteran actor Jevetta Steele, who acknowledges that she sees a little of Brenda in herself.

“I love this piece,” Steele said. “At this time in my life, it speaks to me. When I read the script, the first thing that came out of my mouth was, ‘Oh my God.’ Here is this powerful woman-I know sisters like that-who is all put together, but she projects all this bravado to cover up her insecurities.”