Barataria has been too intense lately. That’s no good as we head into Full Blown Summer, the period of time defined by no school for kids. It’s time to have some fun.

I love to cook, but I don’t follow recipes. I work on a sense of balance between the five flavors, and yes there are five if you count umami. The techniques I use run between East Asian stir-fry, Indian masalas, French saucery, and just a touch of American excess. I work with whatever looks good at the market or is on sale. The ingredients I rely on include these “secrets”, my special thangs that round out the tastes and achieve a special balance. 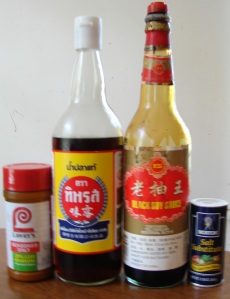 Lawry’s Seasoned Salt: It’s a standard joke in our house that whenever someone says their recipe includes “secret spices” they mean Lawry’s. It’s also probably true. This is the stuff that’s far too embarrassing to admit, so I’ll put it up front just to get it out of the way. It’s not a burger on the grill without some of this and maybe a little garlic.

Black Soy Sauce: One of the great treasures you can only find small Asian run stores like Ha Tien, this is not your average soy. You have to find the stuff that is as thick as molasses that comes directly from the People’s Republic of China. The label contains only the minimum amount of English required by law. The thick stuff inside has to be used carefully, but it “beefs up” absolutely anything with a rich, round flavor. It’s also not as salty as the cheap stuff, just rich and full.

Fish Sauce:  Another delight from small stores. I’m not really sure what this is because the label is entirely in Thai. Usually these sauces are anchovy based – the only English says it’s “pressed fish”. Since we’re all a bit pressed at times, I wonder what causes a fish a less than relaxing life – it probably involves Thai fishing vessels somehow. Nevermind. Used with tremendous caution, no more than 1-2 teaspoons, delicate flavors like pork and chicken become rich and intense.

Lemon Juice: A quick squirt adds more than just sour tastes to the balance, it can brighten the overall picture and make simple dishes come alive. It takes great care to not over-do the lemon or make it a feature of any dish – it’s purely an accent. It’s better than lemon zest in many cases not just for ease of use but also because it is more bold and dangerous.

Better than Boulion: With some corn starch and hot water, this thick pomade of stuff in a jar makes a fantastic base for any sauce you might want. The beef is truly beefy, the chicken fresh and alive, and the vegetable deep and inviting. This is cheating at its best, so it has to be one carefully. This is also far less salty than most boulion but it still packs a bit of punch in that department.

Salt Substitute: Better known to chemists as KCl (Potassium Chloride) this can un-do something that has gone too salty from the other ingredients above. It’s not anti-salt, however, in that it doesn’t simply remove salty excess. You have to have other flavors around, especially sweet or sour. This is another great trick for rounding out the balance and making it work together. It may be dangerous for people with heart conditions or other imbalances, so you have to watch that as well.

Spinach: Tacos, salads, anything that calls for lettuce should have spinach instead. It’s healthier, tastier, and all around far better. It also can be cooked into anything that relies on a lot of herbal tastes to help round out and blend the herbs into a coherent package. It’s my go-to green for nearly everything.

Hoppy Beers: Generally, bitterness is best when it comes from fresh herbs. The herbs you use have to do with what’s available, what you’re going for, and what you like. But there are times when some in-your-face bitterness is good, too. Right now there is a trend for excessively hoppy beers that are really not worth drinking at all – most are made by amateurs with little to no sense of the great balance that is part of the brewing art. But as part of a beef marinade or for some upfront bitterness in a dish that is otherwise devoid of herbs, why not?

That’s the philosophy and secret ingredients I cook with. What about you?