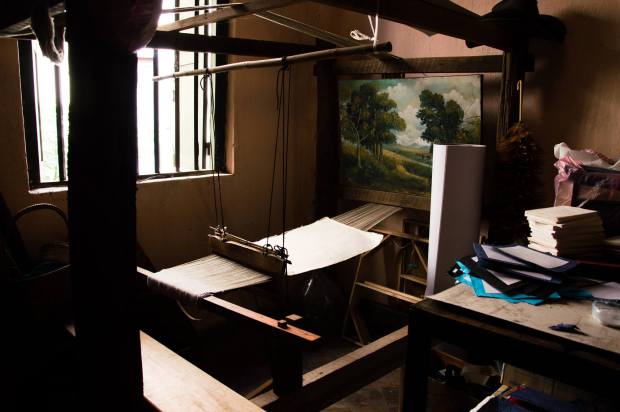 The door was open. I dropped in, of course. It became a gallery. Paper, paint, textiles— all scattered across tables and floors. I quietly called across the room, hoping to not wake anyone up but still intrigued to step in like the curious explorer mae always scolded me as a child. No one answered back. I walked through a maze of art pieces hoisted along the walls from top to bottom and rows of old books and sheets of paper tightly and neatly stacked high on broken tables. The pieces spoke of an artist who had more than one love. There were influences of Monet, Picasso, and Van Gogh in the impressionist brush strokes and style of bright colors. This was an artist who was privileged enough to have studied from a Westernized paintbrush, but held a Lao eye to what the pieces had to say about the Lao consciousness. I sat on a bench, the only bench, and waited in anticipation. After 20 minutes of sitting and observing, no footsteps in the distance was heard. No artist. I walked out, but I was already inspired. 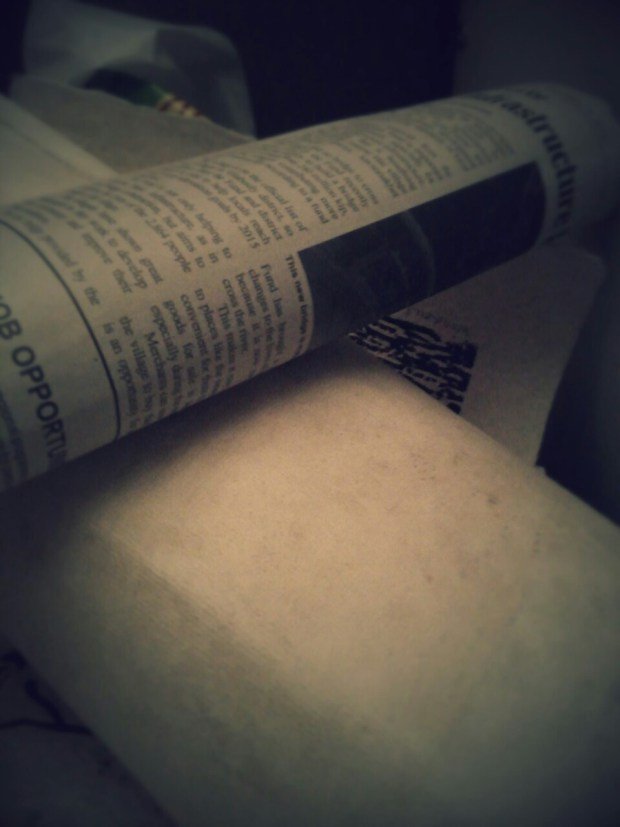 What an art piece gets rolled up in: old newspaper

There is real Lao art– if you look for it. Beyond the typical fare one would find on any pavement of lined up sketches of yellow-robed monks and lily pads; there are those who are artists with an appreciation of what oil on canvas really means to them in re-imagining the Lao and Laos that surround them. I sometimes find gems of a few artists who set up tents along the Mekong Night Market in Vientiane. I seek out the ones with dried paint scars on their clothes and hands. I met a Lao woman named Sone. She told me her story of how she decided she loved making woodcut paintings using leaves, branches, and necklace pendants. She was asking for a starting price of 30,000 Kip (less than $3). The fragile paper and paints were hand-made and she places all her pieces in rolled up old Vientiane Times newspaper. 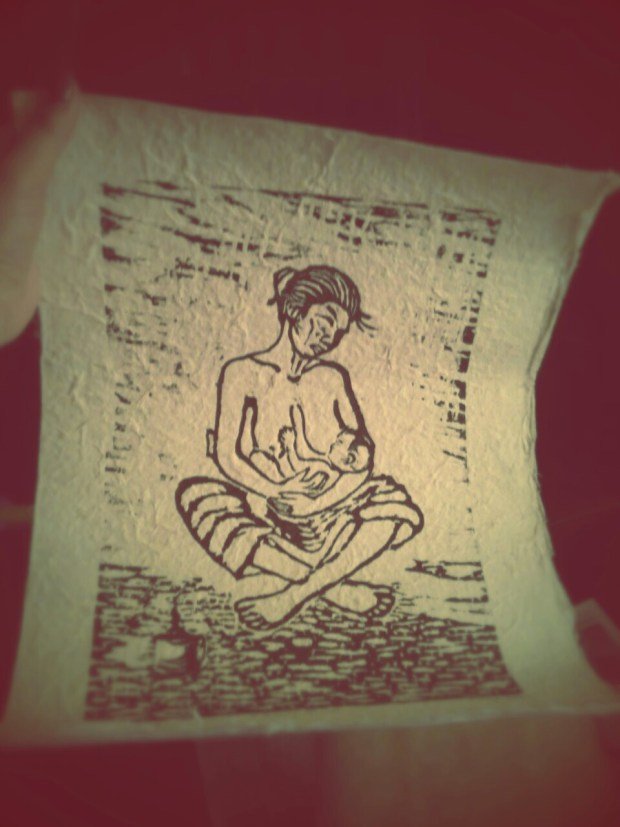 If you come across it, the visual arts scene in Laos is something to be amazed by and it’s emerging in a way that many foreigners but not enough locals are appreciating in value. I even sneered at the grazing Americans next to me who were trying to negotiate lower than 50,000 Kip with Sone. “You know the other artist down there sells his pieces for only XXXXX kip?!” they exclaim. Sone spoke some English, she seemed confused by the comparison but was almost agreeing in an attempt to just get rid of her paintings. I gave them the stink eye, probably not noticing that I understood every word they said in English behind her back. “How do you exactly put a price on her art?”, I chime in. Paying lower than what the artist asks is like saying you simply don’t think their work is worth anything more than a McDonald’s meal, pretty much. That’s a slap in the face. The habit by foreigners who abide by the everything-must-be-negotiated-to-the-lowest-monetary-value that their terrible travel books have promoted has got to end. This is why Lao culture and our art become lifeless souvenirs stuck on frameless walls.

For Lao Americans, community-builders are abundant but how about our culture-builders? They’re few, but far in between. You have the writers, poets, playwrights, dancers, and musicians, etc. Some have transcended the boundaries of tradition and innovation in their craft, but how many have made an artistic statement that have ‘wowed’ us? Enough to induce a Lao renaissance love affair that even mainstream artheads in Manhanttan would frame and fight over in bidding wars? It’s something to seriously think about, especially since art has been part of Laos for over 500 years.

To be alone in a space that belonged to someone else? To take a peek inside their world and flip through their artwork? I felt it was an open invitation to a personally gallery. I just met someone I have yet to meet. And I can’t wait to do the same in a future Lao American art scene. Everyone should have a chance to marvel at these works of art in a space and setting that is meant for the public eye, and before it drifts away at the hands of the next cheapa$$.

I only know just a tad about art as much as the next typical Lao American, but one day, I want my daughter to scream happily when she opens a birthday gift of one of the greatest works of Lao art. They exist. We need to put meaning to their existence.

At top: An artist workspace in Luang Prabang, Laos