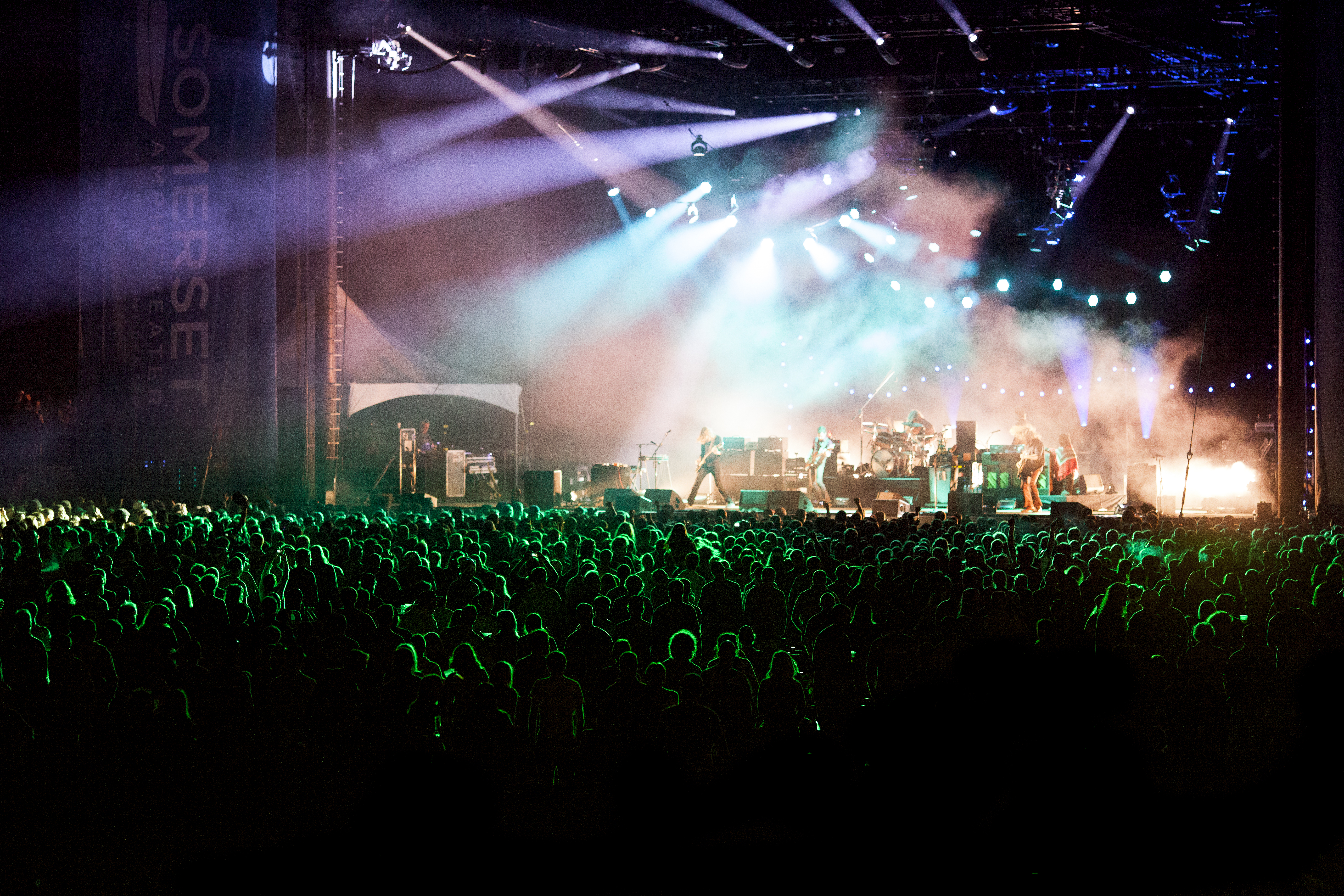 Globes of lights casually strung across the stage, bobbing up and down in the breeze of a cool August evening as the sun set over a lush green pasture, it was a scene you’d expect at a friends backyard BBQ or at bonfire but on this crisp Friday night in August it was the setting of a intimate performance by Band of Horses and My Morning Jacket.

This was the first time I’ve made the trek to Somerset, WI. I’ve been to amphitheaters before and expected something much larger; in fact as my car slowed to a stop because of rush our traffic I assumed that the concert traffic had something to do with it. To my surprise I was totally wrong, the only thing that was annoying was waiting in a 10-person-wide line that snaked along the entry to the venue for 30 minutes to get a beer.

I have to admit that most of my enjoyment of Band of Horses was impeded by waiting in the beer line. The thing about Band of Horses is that they are a perfectly adequate band, they’ve written some really good songs and those seem to resonate deeply within the audience. The girls standing behind me absolutely went bananas when the jangling first notes of “No One’s Gonna Love You” floated across the crowd, they sang in unison for the entire song. “Funeral” is another transcendent and beautiful song. From the moment the opening chords are plucked and Ben Bridwell’s haunting croon threads through the thundering power chords of the verse I noticed people quickly gathering their friends so they could wrap their arms around one another’s shoulders and dance while the chorus galloped along.

Other songs like “Cigarettes and Wedding Bands” seemed to fall flat even while the music swelled through a crescendo into a booming chorus and Bridwell’s vocals soared toward the heavens. It just lacked any sense of real emotion. That’s not to say that it wasn’t enjoyable, people mulled around the field double-fisting beers and laughing with their friends, mostly wearing plaid shirts. The entire setting was really fitting for Band of Horses’ polished alt-country style. Right there, in that moment you really just wanted nice music to listen to that brought people together.

Just before My Morning Jacket took the stage it dawned on me that we might really be in for something special. I haven’t particularly liked MMJ’s most recent music, but one thing remains true, they are a great live band. So great that people lose their minds every year on message boards hoping that they are going to headline Bonnaroo. As I looked around I guessed there probably weren’t more than 3,000 people in the smallish amphitheater. I had easily settled into some comfortable seats dead center just in front of the soundboard and there was hardly anyone sitting around me. It felt like I was just a close to the stage as I usually am when I’m standing by the back bar at First Ave.

The stage lights lowered and a low rumble of bass from “At Dawn” began to engulf the crowd as the band bounded out onto the stage. Front man Jim James came running out wearing a blue pleated cape (a cape!) obviously a smart transitional look when trying to decide what to wear on a brisk summer evening in Wisconsin. There was also a stuffed bear in the corner of the stage wearing a poncho, another seasonally appropriate item of clothing.

The twinkling piano riff off of “Circuital” transitioned into the song as the sun fully set on the evening. As the song moved into its outro, James’ trademark “Ewwwws” floated through the bouncing guitar riffs making me feel nostalgia for the days I spent hours listening to them. Apparently I wasn’t alone, as James said between songs “I’m feeling nostalgic. It’s like we’re at the county fair. I can even smell the campfires.”

MMJ did what they do best; they played some wonderful songs that are reminiscent of alt-country and classic rock. As their songs morphed into jams with everyone improvising along the way people in the crowd seemed content swaying along as songs bled into the eight and ten minute marks. “Holdin’ on to Black Metal” and ode to, well, metal-ish music, a song I’ve always found to be a bit ridiculous ended up being a favorite as people responded by jumping up and down and playing air guitar.

The band continued to shred through the evening play song-after-song that just begged you to let yourself get lost in the night. “Mahgeetah” bounced along getting the crowding dancing adding to the “county fair” feeling that James described. “It Beats 4 U” and “Wordless Chorus” off of their album Z slowed the mood as low gurgling organ, mixed with staccato plucked guitar, and James’ soaring vocals, and the lights shot up it was as good of time as any to enjoy being outside and let the music wash over you while you starred up at the stars.

For an encore, “local heroes” the term James lovingly used to describe, Trampled by Turtles joined the band for “Anytime” another off of Z, which was met with a huge roar of the crowd. Before ending the night with classic rock rocker “Big Holiday.” Guitars wailed and drums continued churning and charging into the night while James flipped his hair back and forth put the exclamation mark on the evening.

One thing that did stand out as odd about the performance was how much attention was paid to Jim James. I know he’s the lead singer but I’ve always thought of My Morning Jacket being an accomplished band, not the brainchild of one man like Bright Eyes. However, throughout the performance the spotlight would be on James while he head banged along playing the rhythm guitar part while Carl Broemel, the guitar play shredded away in the shadows. Even though the band has gone through some lineup changes it felt very “rock star-y” which never seemed to fit with the band’s persona.

Despite that, the performance was still intimate in that you were so close to such a great live band. Their sound was so clear you could hear every element of the music, could lose yourself dancing or lay back and feel the grass underneath you. But it was also expansive because My Morning Jacket puts on a performance that can’t be contained by the stage but exists neatly in the stars in the night’s sky.