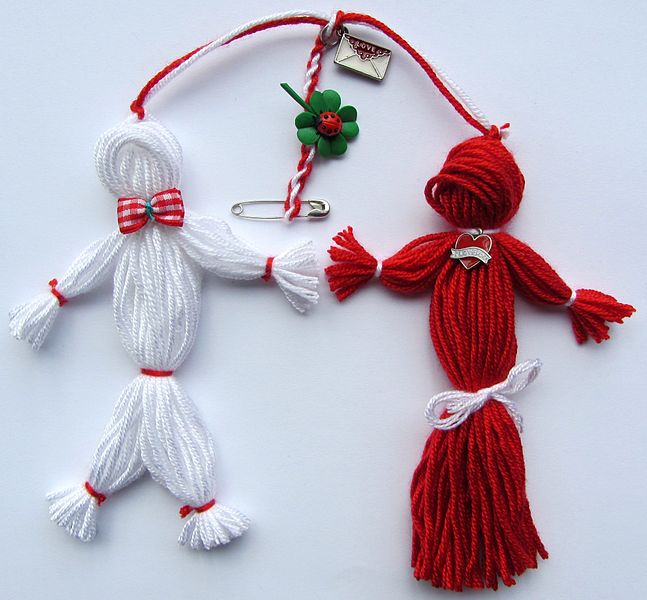 It’s March 1st today. Until 1998, when I made my first trip to Bulgaria, March 1st didn’t mean very much. Today, however, March 1st, 2013, some 15 year later, I will share my discovery of what March 1st means to me all over the University of Minnesota campus. I will do it with Hillel students as we give martenitzas to anyone who will take them.

In Bulgaria, on March 1st you give martenitzas to friends and family to wish them prosperity, good health. You look forward together to the coming of spring, which you hope will be soon. The country becomes awash in the brightness of red and white everywhere. Three weeks later, on March 22nd, or when you see your first stork or swallow of the season, you hang your martenitza in a tree. It’s a lovely tradition.

It feels good, and it seems fitting to me to celebrate Chestita Baba Marta, this holiday of optimism with the people of a country I admire so much, who give me much reason to feel optimistic in the world. I will celebrate it as a way to get people to pay attention to the real story that I want to share. The story that when I first learned about it, gave me reason to have hope about humanity. I’m still not entirely sure why the story is not much more widely known, but it is my goal to spread the story of Bulgaria saving its Jews during WWII as widely as possible.

The story I want to tell is a story of hope for mankind. It is a story of the power of one person to make a difference. It is a story that as a Jew, I think must be told. I did not learn the story myself until 1997. It was by chance that I met two Bulgarian teenagers at a BBYO International Convention that I was staffing, and learned a bit about their culture and their country. The most compelling thing that I learned was the story of how Bulgaria’s Jews survived the Holocaust. While I was quite moved by the story, I was also extremely frustrated that I had spent my entire life up until that moment not having ever heard the story.

As a child learning about the Holocaust, one of the first questions I remember asking was, “Why didn’t anyone stop it? Why didn’t anyone fight back against the Nazis and the treatment and killing of the Jews?” In the summer of 1997 I finally learned that there was a whole country of people who did stop it, who did fight back. I knew then that it was a story I had to be sure was told and told again. I wanted everyone to know it.

Allied with Germany, there were people inside Bulgaria and in the government who were surely anti-Semitic and who attempted to help Hitler rid the world of the Jews. In January of 1941 the “Law for the Defense of the Nation” was imposed, requiring Jews to wear yellow stars, and restricting travel and participation in commerce, among other things. There was widespread outrage from many circles: writers, artists, teachers, lawyers – they signed petitions and led mass protest to let their voices be heard that they would not tolerate their fellow citizens being wronged in these ways. Because of the bravery of individual people coming together to voice their outrage, Bulgaria’s Jewish population survived the war.

Bishop Stephan of the Orthodox Church was a key figure in helping to stop one of the orders that the Jews be deported for certain death in the camps. The Minister of Justice, Dimitar Peshev, used his position to influence the situation. Peshev’s main interests were the Constitution and human rights. He was born in Kyustendil and was a friend to the Jewish community. Despite his passion for human rights, he had not objected to the “Law for the Defense of the Nation”. However, in March of 1943 the Jews of Kyustendil were ordered to leave their homes with only a few belongings.

“Understanding the implications of this order, the citizens of Kyustendil appointed a delegation to ask the government to repeal this evacuation order. On March 8, 1943, the delegation marched into Dimitar Peshev’s office. One of the delegates, Peshev’s Jewish friend, Jakob Baruch, informed him of the government’s plan to deport the Jews. At first, Peshev thought Baruch’s words to be untrue until he called several high government officials who confirmed the rumor. By the morning of March 9, Peshev had made up his mind to halt the deportations. Together with 42 members of Parliament’s ruling majority, he presented a petition to the prime minister officially objecting to the upcoming deportations. Ultimately, Bulgaria’s Jewish population was spared when, on March 10, 1943, the government rejected the Nazi deportation order.” [Source: wikipedia]

There are more details to the story. Many personal narratives have been gathered together into a documentary film by Jack and Lisa Comforty. It is an incredibly inspiring story of what can happen when people speak up in the face of injustice. When they do not keep silent. It is a story that I must continue to tell.

Today, on March 1st, I will think about my Bulgarian friends as I don my martenitza and join Hillel students as we pass them out all across the U of M campus. I will be thinking about the fact that I would never have met them had it not been for the individuals who spoke out during WWII. I will be sharing their story.

Hillel will show the The Optimists on campus on April 11th. For more information contact Sarah Routman sroutman@ujews.com

Top photo: U of M Hillel will be giving out martenitzas until March 22nd. (Image from wikipedia)